I’m on a bus back to NYC after an amazing Startup Weekend DC. There were 55 startups pitched on Friday night, Saturday morning 11 teams were formed and Sunday evening they each demoed a prototype that they built in just one weekend. Three of the groups included plans to add voice or SMS using Twilio and one demoed a working voice app. The energy was astronomical, I’m really looking forward to attending Startup Weekend NYC in September. 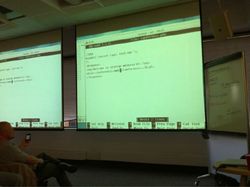 Friday evening, before the pitches began I did a five minute live coding demonstration of the Twilio API. The demo inspired a ton of ideas that people pitched. After the pitches we took a break and started scouting to form teams. I had an idea for SMS based two-factor authentication, and a team started to form around that idea before we called it a night.

Saturday morning we found a competing product that had already been built and our team disbanded. Apparently this is a very common occurrence at Startup Weekends. It wasn’t much of a problem, within 20 minutes we had a newly formed team working on a mobile app. “Pitch Night” helps attendees of events like Startup Weekend make sense of the chaos when teams are forming. We spent four hours scoping the project and drawing mockups and then close to 24 hours building before we did our demo on Sunday.

I was really impressed with the final pitches by iSpeedShop, Easy Pay HOA, and Head to Bed. iSpeedShop built a mobile app that allows you to locate itmes in your local grocery store by aisle number, they plan to make money by selling targeted advertisements based on what products you are trying to find. Easy Pay HOA allows members of home owners associations and renters to pay online without requiring an account. Head to Bed built a voice powered sleep log using Twilio in addition to a sleep community.

All-in-all, it was a great weekend. I learned a ton, had awesome team members, and made great connections. I highly recommend attending a Startup Weekend near you.