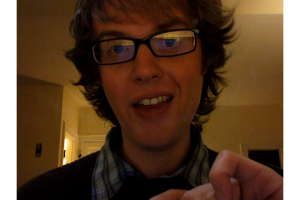 Josh took our phone menu sample code and supercharged it with 1.21 jigawatts of fun to create an RPG that transports you back in time to 1906 and into the body of Alexander Graham Bell. Dial (775) 573-4288 and use your dialpad to move Bell through his house and search for items. Find everything you need in time to save the Boston Museum of Fine Arts. Josh’s Alexander Graham Bell impression is not to be missed. Here’s the story behind the story by Josh Cuppett:

“I was working on an interactive movie / choose your own adventure FMV game for the iPhone and wanted to give players who made it to the end a fun way to stay engaged with the story line. I came up with the idea of calling back in time and playing an RPG on the telephone, since everyone with an iPhone would naturally also have the ability to make a call.

“I had been seeing mentions of Twilio on Hacker News and decided to give you guys a try. I took the code for your phone menu and put it up on DreamHost, discovering just how easy it is to use the Twilio API. You guys make that so easy I decided to give some complexity to the game.

“I decided the easiest use of a standard dial pad was to have the numbers in the corners (1,3,7,9) be search commands and the 2, 4, 5, 6, 8 numbers which already are laid out like a controller or compass be movement commands. So that gave me 5 rooms with 4 corners to hide stuff in. The decision to call back in time made the choice of Alexander Graham Bell pretty obvious. I did some digging on Wikipedia and came up with a roughly historically accurate plot and set about trying to figure out how to design the game.

“The coolest part about Twilio is that you don’t have to do any fancy data storage—the first draft of the game I had all of the variables stored in the URL since no one would be seeing it. I did end up storing the player’s progress, but that was mostly because I wanted to limit abuse of the game and prevent people from spending more than 30 minutes on the phone.

“Once I had all the safeguards in place and had tested the game out pretty throughly, I submitted it to the independent gaming subreddit and had plenty of beta testers. I was considering a second Twilio number where you’d pay to play additional games, but I’ve gotten side tracked on other projects and haven’t put time into working on that.”

Made something cool with Twilio? Write a tutorial, create a screencast, or give a talk about it and you could win this week’s developer contest.