Autumn was signaling its arrival in Philadelphia two weeks ago with an Eastern cold snap, the turning of the leaves and the sound of hustling students returning to their studies after a care-free summer. The University of Pennsylvania was postively abuzz with eager young minds welcoming one another back with highfives and sorting through fistfuls of syllabi, the fear of an impending midterm or paper deadline far from their thoughts.

But tucked away from this fanciful hubbub in the hallway of a building in the school of engineering, 200 students from every major computer science program across the Eastern Seaboard were heads down into their laptop screens, stone-faced in concentration and eerily quiet. While their peers made merry in those first few weeks when the semester is still young, this remarkable set of builders were hard at work at PennApps Data, the fall installment of the hackathon run by students, for students.

A Handful of Undergrads Change The Game

Now the fourth installment of the popular developer competition, PennApps featured the kind of expert execution and enthusiasm that we who do this for a living only pray to attain. Organized by a small group of engineering students including Alexey Komissarouk, Ayaka Nonaka, Pulak Mittal, Jonathan Leung and a few more, these kids are showing the Internet how hackathons should be done.

Nearly entirely on their own, the PennApps organizers lined up three meals a day and snacks a plenty across the entire 48 hour hackathon. They coordinated security for the building and lobbied faculty and the provost for building space. They raised a huge prize purse with many additional category awards – 14 in all totalling almost $10,000. And they funded it all through their own sponsorship sourcing, attracting big corporations like Microsoft, Comcast, and Yahoo! as well as startups like Venmo, Tumblr and Twilio. 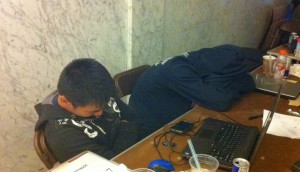 PennApps participants were fully fueled, completely engaged and committed to throw themselves through a brick wall to demo their hacks – no small feat and hardly accidental. In a world where large companies throw big dollars to get the eyeballs of 18-24 year olds, this loose-knit set of students donating their already sparse spare time showed us all a thing or two about how authenticity wins with young people.

Caffeine came early and often, with organizers rolling up and down the hall with energy drinks and coffee. Periodic pump-up giveaways kept the participants awake through the night with the best prizes saved for 6am. What kind of prizes? Only those who were up at 6am found out. And if that wasn’t enough to keep the crowd wide-eyed and coding, the PennApps tradition of a late night run for some local fast food certainly did.

The crack PennApps organization inspired impressive production. In 48 hours, the participants built and demoed 41 different hacks. All showed a remarkable amount of polish for any hackathon, let alone one dominated by undergraduates. Winners included:

We’d like to extend a huge thanks to the organizers of PennApps for allowing us to be a part of this great student-run hackathon. We had a blast and can’t wait to participate next year!