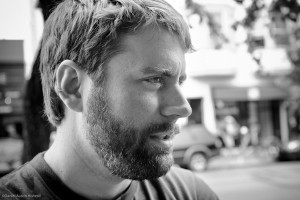 I’m Rob and I live in Brooklyn, New York. I just joined as a Developer Evangelist at Twilio, and I’d like to tell you a story.

We were fast approaching midnight and the students at the hackathon were settling into a rhythm. The din of brainstorming and flow diagramming relaxed into the quiet intensity of heads down coding. No longer a frantic stock exchange trading floor of ideas, the kids were starting to solve the first problems they had scratched out on notepads and whiteboards. The teams were assembled, the headphones were on and the Mountain Dew cans were piling up.

The real work had solidly begun.

In a corner of the lobby a fair distance from the main group, one student was staring blankly at his Macbook, obviously dejected.

He sighed, “I don’t know. Couldn’t find a team.” I pulled a chair up and checked his screen. He was staring at a blinking cursor in TextMate, the file empty.

“You came by yourself?”

“Yeah,” he said, tugging out his earbuds. “I don’t know what I can do – I’m not much of a coder, I just like computer stuff.”

“Well, let’s try something right quick. Do you have a cell phone?”

In fifteen minutes we worked through a Twilio quickstart guide for outgoing calls and after navigating a few speedbumps, his Nokia feature handset lit up as his code executed. He looked up at me, looked back at his screen, answered his phone and heard his code say, “Hello world.”

And that is pure magic.

Call it the “Neo moment” – the double-blink second when a web developer discovers he or she can use the same toolset from a career doing web programming to make a hunk of plastic in a pants pocket go beep. It is a powerful inspiration in the hands of the Internet hacker, and it is why I joined Twilio.

There’s something about that moment when the telephone rings that sets off a bomb in every developer’s head – an explosion of ideas ignited by the black box of telephony getting cracked open and for the first time being accessible to hackers of every stripe. From a student stumped late night at a hackathon to an old school VB hacker trying to help his wife’s patients take their medicine, developers see the phone light and a switch gets flipped.

In my career, these are the moments that I love most. Like when I see a small business owner discover they can customize SugarCRM to create a first rate customer service experience. Or when I watch a novice programmer find out he or she can watch a favorite YouTube channel on Boxee in just an afternoon of coding. These were the moments I lived for – when the developer gets that first win and sees the possibilities stretch out in front of them like a Kansas highway.

When they conquer a new technology, and see as far as they can dream.

For the Twilio community, it seems the magic doesn’t stop there. What follows is equally astonishing – the next fifteen minutes, fifteen hours, or fifteen days when a new Twilio developer turns that parlor trick into a real product that connects human beings.

After the phone rings, developers start getting ideas. Those ideas start to coalesce into experiences. Those experiences flow into products. And those products start to make a difference in how we talk to each other. In an single inspired weekend, the seed planted from a labor of love can grow into real products people buy that pay the rent. Or greater still, products that create the opportunity of a lifetime.

I joined Twilio to create those stories with you.

Next week, we’re getting together with a bunch of similarly driven folks to talk about how we’re going to do it. I hope I see you there.