The inaugural Video Hack Day was held in New York City’s General Assembly last weekend. More than 100 hackers gathered from around the world, coming from as far away as Budapest to create a lineup of mind-warping hacks using APIs from Shelby.tv, FrameSocket, YouTube, Boxee, OpenTok, and many more awesome startups.

As soon as the API demos were over, the hackers quickly formed teams and got to work, powered by dreams of Apple TVs and NASDAQ Jumbotrons in their futures. Fueled by great food and lots of free drinks, the hackers worked long into the night, some forgoing sleep for the benefit of their hacks. 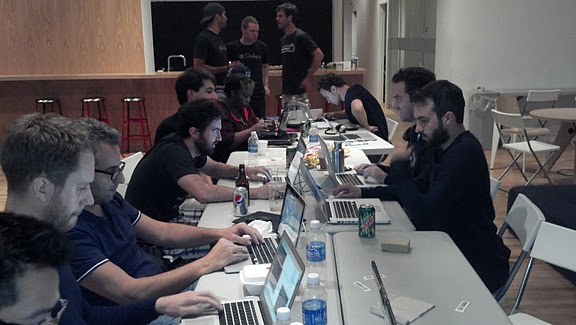 With morning came a truckload of bagels and a fast-approaching noon deadline for hack submissions. Some of the teams were so immersed in the shell that they forgot to submit their hacks and had to bribe the Shelby.tv team to accept their late entries. But by 2pm, 20 teams had emerged victorious and prepared to present their hacks to the inquisitive panel of judges. After an anxious but exciting feast of demos, the judges announced the winners.

Second Place was awarded to Screening Room, a turntable.fm for video created by Buspreneurs Du Hoang and David Wolf along with video hacker Rabih Nassar. The site lets you chat about videos and share them with your friends, while rating them in real time.

And the winner is...

First place and the People’s Choice prize went to the Sci Fi-esque Terminator Vision, which is an augmented reality iPhone app that lets you see the world like Ah-nuld. While it is not yet in the App Store (follow @terminatrvision to find out when it will be), they did make an awesome demo video and showcased the app live during their presentation. It certainly lives up to its name and makes me fear the coming Robopocalypse.

The prize for best Twilio integration goes to Where 9/11, created by John Fan of 500 Startups’ Cardinal Blue. Where 9/11 was built using Ruby on Rails, the YouTube API, and Twilio. The app lets you share your story of what happened to you on September 11th and pair it with a video montage. Your story is then made available for commenting and further sharing to create a memorial and allow you and your friends to reflect back on that fateful day and hear the experiences of others.

We managed to track down John for an interview about Where 9/11 and Cardinal Blue:

Congratulations to all of the participating hackers on their awesome projects and thank the other event sponsors and the Shelby.tv team for bringing yet another great hackathon to New York. Be sure to look out for Terminator Vision the next time you’re in Times Square!