I’m a hacker. So when I was invited to mentor at Lean Startup Machine, let alone two of them in a row, I was a bit taken aback. The Lean Startup concept is a metrics-driven process that allows founders to test their ideas against reality. What could I, a hack-jitsu master, learn from a bunch of business development people touting their membership in this growing Lean cult? A lot, it turns out.

I always had a basic conception of what the “lean” methodology was, but I never thought it would be useful to me as someone who built real, working prototypes. As I began to work with the teams and the other mentors at Lean Startup Machine, I came to a realization that iterating on your product strategy was as important, if not more than, iterating on your product itself. In fact, through mentoring these teams and working with them through the lean process, I shared in a very minor part of their iterative process and learned a lot about my own product development mindset as well.

Traffic is Easy, Buy In is Harder 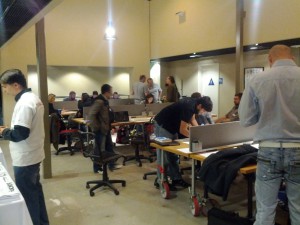 Crowd Jewel was the winning team from Lean Startup Machine Palo Alto. Their pitch can be summed up as “Threadless for jewelry” – a place where designers can submit jewelry designs, the community votes on their favorites, and then Crowd Jewel produces and sells the winning items. Over the course of the weekend, they discovered (through the use of spam, fake postings, and ads – AKA “hustle”) that designers were not only willing to post their designs, but would naturally drive traffic to Crowd Jewel’s makeshift app. The traffic worked, with more than 500 votes being submitted in a matter of hours, leaving the team time to funnel some sales to the winning jewelry designer’s Etsy store.

Though this test worked, it didn’t quite follow through to the end. When Crowd Jewel approached jewelry designers with their proposal to produce and sell the jewelry for them, they were met with mixed results. Designers, concerned about quality and overproduction, were not sold on the idea of outsourcing production by the end of the weekend. The team is still hard at work experimenting with different production methods to find the most realistic and valuable approach before even writing code.

Users Ready Even With Risk

In Chicago, the snowy Machine was won by SkinClick, an app concept to let people take photos of skin problems on their phone and submit them directly to dermatologists for review. The team ventured out into the wilderness of downtown Chicago, interviewing potential customers about their problems with skin care. They found a high number of people with skincare problems and people who were willing to send share via a mobile device. In fact, ready or not, the team received MMS messages of skin rashes from potential customers. Though SkinClick was very successful in this regard, they ran into some problems on the other end of the equation. Doctors had concern with the picture quality from cell phones, especially with the risk of making an incorrect diagnosis and the professional implications that comes with that. SkinClick did receive Letters of Intent from doctors interested in the product, though the team says they focused on working out the bugs in their strategy first.

These teams were able to make some significant advancements in their business strategy and even their product design, before even building a product. In a mere 48 hours and with essentially zero dollars spent, they are now better poised and more prepared to build their products, with continuous and focused customer input.

Congratulations all, and thanks to Trevor, Ryan, Jenifer, Grace, and my fellow mentors for organizing this awesomely educational event! Lean Startup Machine may be coming to your city next, visit the site for more details.