Aidan Feldman is a developer, evangelist and general ne’er-do-well at Jux. When he isn’t up all night coding with his cats, he’s leading a double life as a modern dancer. Check out his blog, Github and tweeters.

So I’m a hackathon junkie. There seems to be a new event every weekend in NYC, and I find myself staying up way too late on way too many consecutive weekends building apps of vital cultural significance [like mustachifying the internet].

The format is straightforward:

...and I love them. It’s a tried and true recipe, so why not stick with it? Hacker Olympics was different. From day one, it was cloaked with mystery. No one knew the structure or location. The organizers were anonymous (they went by the pseudonym “Morpheus”). On top of all that, there was a logic gate [ha]: you needed to solve a puzzle to register. Hackathons are great for getting beginner coders building apps on projects and companies excited about the developer community, but having a cutoff requiring some level of skill? This was going to be a legit cadre of hackers. 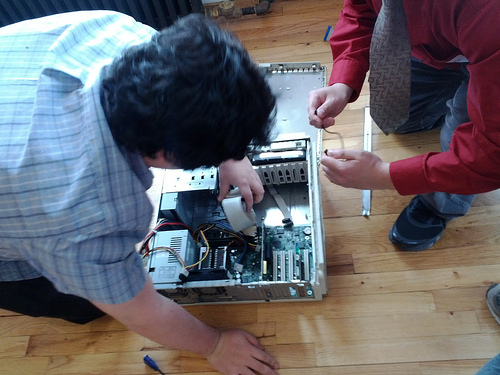 When we showed up to Voxy that morning, it became immediately obvious this was no run-of-the-mill Such-and-Such Hack Day. We split into groups of three, and immediately started the rotation of challenges. Where the normal hackathon is a product development race, this was more like kindergarten. First, we had to disassemble and rebuild an old Dell tower as fast as possible [“Where the hell is that power connector pinout for the floppy??”]. Next was the Goldeneye tournament – I got cocky and went for slappers and rocket launchers only. Third for our team was “Stack Overflow”, where the team to build the highest tower of red Solo cups wins. All of the challenges were equally ridiculous and hilarious – a welcome change from staring at an LCD screen for 30 hours straight.

Haris Amin on the shoulders of giants (yours truly)

Though there were tasks that involved actual coding, they were surprisingly clever. Task one: get your mom to tweet at @hackerolympics that she wants her little bubbeleh to win... but you can only communicate via Twilio. And, and while you are trying desperately to beat the clock, other hackers blast karaoke to throw you off [YOU try concentrating while someone is belting “I’M ON A MOTHERF&%KIN BOAT”!] In another challenge, come up with a way to login to a website, sans form – I almost threw my laptop across the room trying to get my accelerometer Konami code down. 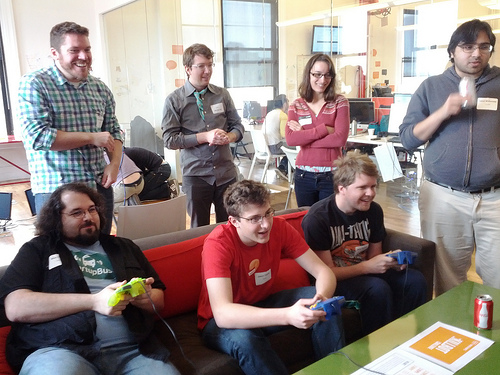 The highlight of the afternoon was “Startup Charades”, where we made fools of ourselves trying to act out the names of NYC-based startups. This is what Hacker Olympics boiled down to: get a bunch of smart people [and me] in one place, and have fun. So how do you wrap up such a well-designed collection of hilarious nonsense? By giving the winners frickin’ lightsabers, of course. That, friends, is a pretty sweet way to run a hackathon. Check out more pictures from the event on Jux and Flickr, and videos on Vimeo.