Last month, Twilio hackers from all around the metro area descended on the offices of Union Square Ventures for the February 2012 Twilio Meetup. Fueled by pizza and beer, we began a fun night of live coding, karaoke, and mingling with the awesome people of New York’s Twilio community. Join our Meetup group and keep an eye our for our next meet up in your city.

Frank Denbow, a veteran Twilio hacker and more recently the founder of StartupThreads, was our next presenter. Today he was showing off Songsicle, an app that lets you deliver a musical greeting and customized message to a loved one with merely the click of a button. While the app itself is a great concept, Frank had the audience laughing hysterically when he played the recorded call where he asked his mother if she had received her musical greeting for her birthday. A great demo, indeed!

Jeff Novich, the entrepreneur behind Patient Communicator, was our last community demo with his awesome networking app Cnvrge. Cnvrge provides a structured format to help you meet and greet people at a networking event, even if they’re not someone that you would normally gravitate towards. We were in for a special treat at the Meetup though, as Jeff showed us some of the core PHP code behind the app – clearly a hacker for life. You can read more about Cnvrge HERE.

Twilio Hacker Cameron Cundiff came out to demo an app built on top of the unpublished Con Edison outages API. His app, Stormpocalypse, lets you get SMS and Twitter updates about power outages in your area so that you can find out when you’ll get recharged even without the almighty internet. It was originally built at API Hack Day in New York and Cameron has since published both the source code to Stormpocalypse and the ConEd Ruby gem that powers it (unofficially, of course).

And last but not least we had Twilio Developer Evangelist Rob Spectre demo his awesome Karaoke app, which he built for the crowd live! Jeff delightfully volunteered to test out Rob’s makeshift machine by singing Blitzkrieg Bop into his phone for the audience. 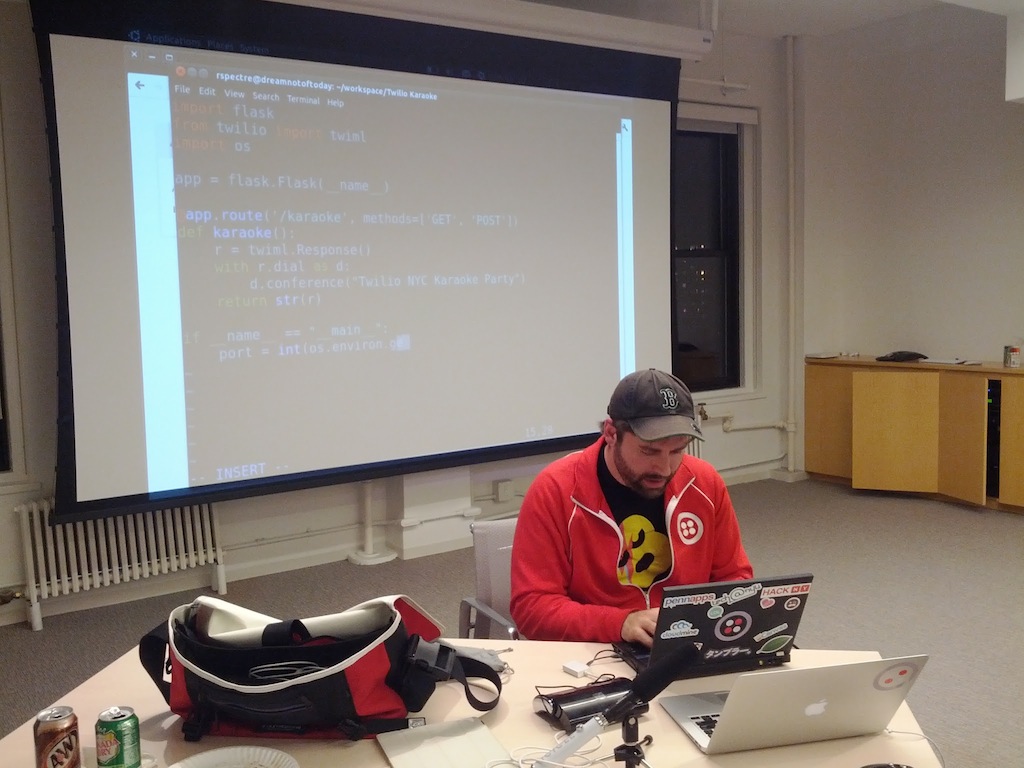 Thanks to Aaron Foss for co-organizing the meetup and to everyone who came out for making this a great time for all! Good luck and happy hacking, we look forward to seeing you at the next Meetup! If you’re interested in organizing a Twilio Meetup in your area, please reach out to me at jonmarkgo@twilio.com so that we can make it happen!