Last week I took the long trek uptown to attend the monthly Columbia Venture Community meetup. The CVC is a private meetup for those affiliated with Columbia University, but I managed to score an invite through unusual means. Honorary Twilion Jeff Novich was using the February CVC Meetup to demo and test Cnvrge, a Twilio-Powered SMS networking game that he kicked off back in May at the TechCrunch Disrupt Hackathon, and he asked me to come check it out.

I entered the room, filled with complementary pizza and soda, of course, and was greeted pleasantly by MC Jeff. Jeff is a veteran NYC entrepreneur working on Patient Communicator at the Blueprint Health accelerator, but he has also bested quite a few hackathons in his time. Today, however, he was not hacking, and instead handed me a simple business card with instructions on how to join his Cnvrge networking system.

Once everyone had received their business cards and had registered, things kicked off. I quickly got an SMS that said “Meeting # 1 – Go meet Jonathan (TheSquareFoot Co-founder, MBA) at Location 4” and we sat down to chat about how Jonathan was building an awesome platform for finding commercial real estate. Seven minutes later, we both got a new SMS instructing us to move on to our next meeting.

Nine meetings later, I left the meetup a pizza-bloated but much more connected man. It was a great experience, and at the end of the night I had been introduced to 10 awesome entrepreneurs, hackers, and students who I continue to run into at events! 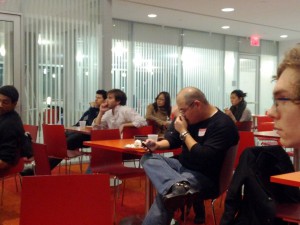 Cnvrge really is a unique way to meet people, in a structured and surprisingly un-awkward way. Jeff explained to me that Cnvrge rose out of a desire to facilitate meetings and introductions to people that you might not otherwise approach, saying: “I fully understand the desire to have transactions with only the ‘right’ people – like I’m looking for a developer, so why would I waste my time with a micro-biologist or a lawyer? That’s fair, but I’d argue that growing your network and becoming an integral part of the community will yield far greater value, much of it unanticipated, than just focusing on the short term.”

I’d like to thank Jeff and the Columbia Venture Community for hosting this great event and demonstrating another unique and community-building application using Twilio.

If you’d ever like to chat about hacking, startups, or Twilio you can find me on Twitter @jonmarkgo or at jonmarkgo@twilio.com
Authors