This is a guest post written by Jonathan Maltz. Jonathan is a junior at Rutgers University majoring in Computer Science. When he’s not doing his best to see all 50 states, you can find him travelling to hackathons up and down the east coast with the Rutgers hackathon crew.

If you’re familiar with the east-coast student hackathon scene, you probably know about the two biggest events that happen each semester: PennApps and HackNY. While these two events are huge, they’re not the alpha and omega of the student scene. Nestled squarely in between New York and Philadelphia, students at Rutgers University hosted their own student-run competition, showcasing the deep hacker culture that has been slowly growing in central New Jersey.

Focusing On The Education

The organizers of the event, Undergraduate Student Alliance of Computer Scientists (USACS) cut their teeth at east-coast hackathons. They knew one of the best ways to get students excited about programming was to host a competition of their own.

Rather than selling students on the prizes, the organizers focused on making HackRU an incredible educational experience. They held a pre-event kickoff to inform students on the finer points of Git, and designated a set of student mentors to help new hackers solve any problems they encountered.

“One of the big things we’re working on at USACS this year is education, and really getting students excited about coding outside of the classroom.” said USACS’ Devon Peticolas. “We figured that there was no better way to get students passionate about coding than hosting a hackathon on campus and having them dive right in.”

After 24 hours, once the dust settled, the 130 attendees showed what they had learned so quickly that day. 36 teams filled with everyone from Rutgers first-timers to grizzled hackathon veterans from Penn State, all submitted hacks which addressed a variety of problems, including (most importantly) where Rutgers students can find free food on campus.

First-time hackers showed what they learned in building CatFacts , a Reddit-inspired hack created by Ryan Swift which uses Twilio to send a target non-stop feline facts for 6 hours. Another first time hacker produced FriendTapes, an app which creates a music playlist for you based on musical similarities between two of your favorite bands.

A group of first time hackers took home Twilio’s prize, three Sparkfun Arduino Start Kits. The gang of three created Dumb Phones Turned Smart, an application to allow users to text in and get weather and movie information which normally requires a smartphone to access.

While first-timers had a good showing, hackathon regulars stood out from the pack when the top three teams were announced.

Coming in third was DJA, an app which allows users to visualize the energy they use in real time by leveraging the accelerometers in smartphone. The team from NJIT then displayed this information to users in a Warioware style game.

A group of three from Penn took home second place with Dropbox IDE, a fully featured IDE in your browser which replaces your local file system with dropbox.

Coming in first was Discrete Boxing, a mind-blowing application which first tasks users with donning tin-foil boxing gloves to remotely box their opponent. By emitting a high frequency sound and detecting frequency deflections caused by punching at the computer, the team of three allowed users to virtually “fight” their opponent, no matter their locations.

Between the number of hacks presented and the big number of hackers, central New Jersey is shaping up to be the bridge connecting the New York and Philadelphia tech scenes. 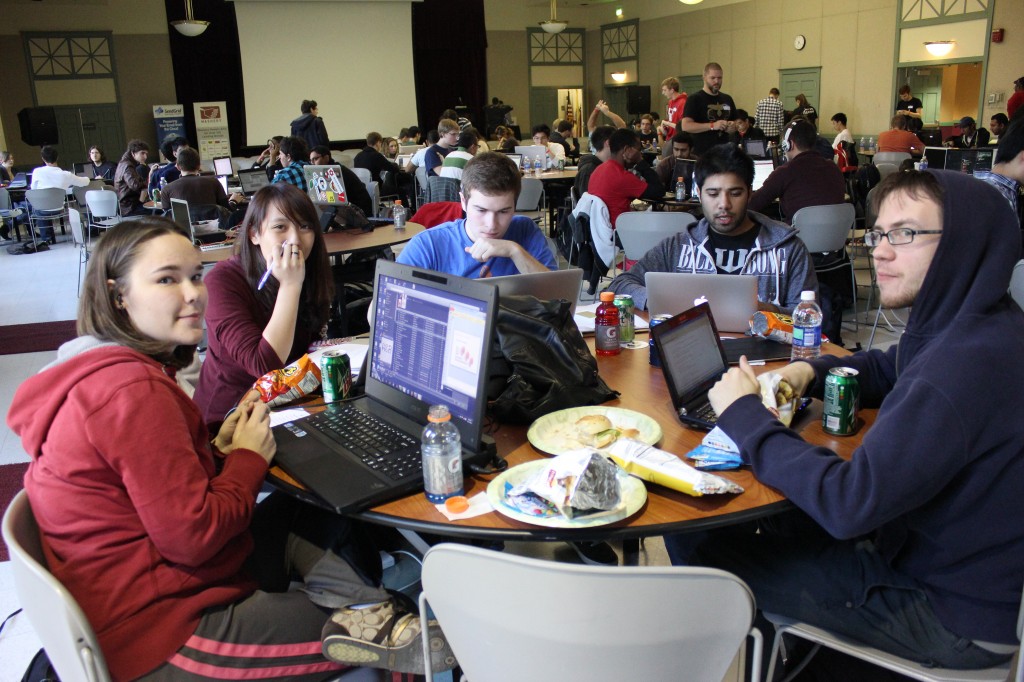