You can wish for it to snow, or you can make it snow via text. This past holiday season, London residents walking down Rivington Street summoned snow flurries on command with one text. The interactive project was organized by London-based creative firm Poke.

When the Hackney Council, asked Poke to give the borough of Hackney a bit of holiday magic, Creative Director Ben Tomlinson already had an idea in mind. “We wanted to create something that was more immersive and fun than your average decorations. And as Londoners are always debating whether or not it will snow at Christmas, we decided to let people make it snow whenever they wanted.” 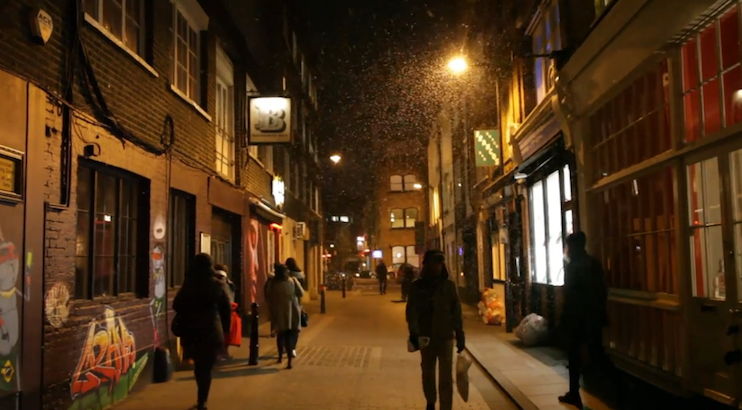 The Poke team put up a sign on Rivington Street, prompting passersby to check in on Foursquare, call, or text a Twilio number to make it snow. If you weren’t paying attention, you might mistake the sign for just another movie poster. But, after a few people tried making it snow, a crowd formed around Poke’s sign. Those who weren’t playing in the snow were either figuring out how to make it snow, or looking up to see where the snow was coming from.

The five snow cannons on various Rivington Street rooftops blanketed the crowd once the user hit send. For good measure, the Poke team also played Dean Martin’s “Let It Snow” over the user’s phone line to create that “magic” effect.

The team at Poke used a combination of Django, Twilio API, Foursquare API, Arduino, and an EE 4G connection to power their project. And according to Poke, magic really did happen. “The reactions were pretty special: hipsters smiled, average dates became magical and Christmas wishes came true.”

You can find out more about Poke here and read their blog detailing their Make Rivington Snow project here.