Who says drones have no personality? At this year’s Drone Games, drones danced the harlem shake, responded to humans chicken dancing, and rebooted other dancing drones.

Team GroupOn won the event with their hand gesture controlled drone. The team at Eyes and Ears Entertainment built a drone that was so awesome, it inspired the judges to invent a new award just for them.

Here’s what the five teams built. Check out photos of the Drone Games on our Facebook page here.

1) Austin based hackers Vitor and Dave Massey built a drone that flies higher when you flap harder. When Vitor and Dave flapped their “chicken wings” in front of a Kinect, the drone climbed. 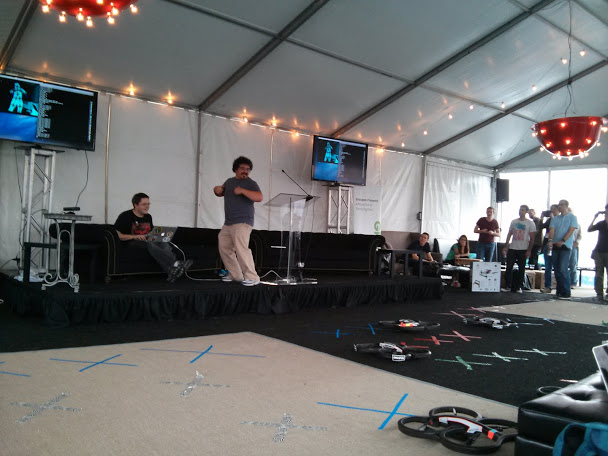 2) The second team built an Arduino drone that uses a sonar sensor to map the room.

3) The folks from Eyes and Ears Entertainment, makers of the Twilio powered A$AP Rocky call-in hotline, built Copter Wolf, a drone that does the harlem shake.

4) Team Groupon built a drone controlled by a leap motion controller which allowed them to control their drone with simple hand gestures. With some slick lines of code, they had their drone in the air in no time.

Vice Magazine’s Drone even stopped by the Drone Games to say hi.

Find out where Twilio will be at SXSW here #Twiliosxsw