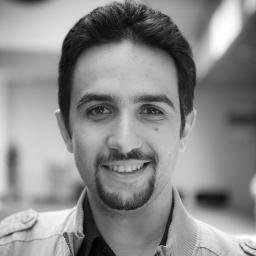 We profiled Ahmad Nassri as DOer of the Month and featured his developer profile on the front page of the DOer Gallery. If you’d like to share your story on the blog, create your DOer profile and email community@twilio.com

In high school, Ahmad Nassri started coding “simply out of need.” He built out websites and dug into source code, and learned to hack. This hobby quickly evolved into a passion, and eventually a profession. Over the next twenty years, Ahmad’s desire to build projects and solve problems has led him on an a-typical career arc — one he couldn’t be happier with.

“My journey has been backwards,” Ahmad says. He didn’t found a startup after college. He didn’t work with a small team. His first “real” job after freelancing was in the mid 2000’s with Viigo, a company that delivered BlackBerry users news, weather, flight schedules, sports scores and more, all before an app store existed.

As Director of Web Services at Viigo, Ahmad started working with SMS. Viigo allowed BlackBerry users to download apps by sending them an SMS with a unique download link. When Viigo’s user base grew from a couple hundred thousand to six million, BlackBerry took notice. They were acquired by BlackBerry in 2010. Ahmad moved to a different company, but kept working with SMS.

“When I went back to web development, I brought all my mobile skills with me,” says Ahmad. He started working with Twilio in 2010, right when Twilio SMS launched. “There’s all these service providers and barriers. We [developers] want to skip all the SaaS, and providers and go directly to the API.”

Ahmad used the Twilio API to program a NFC powered buzzer system for his house. When he needs to open a door, he just sends his door a text message. He hopes to make his house “smart” so that he can give his refrigerator, light switch and oven commands via Twilio Voice. If the code is easy enough to share, Ahmad promises he will open source it.

These days, Ahmad is busy managing a team of 20 developers as UI Development Manager at CBC/Radio Canada, overseeing CBC’s website and mobile presence. He’s also the inventor of Google Chrome Extension REST Console which allows developers to build, debug and test RESTful APIs. Today it has hundreds of thousands of users.

Ahmad mentors, teaches and attends hackathons in Toronto, Canada. You can learn more about his work by visiting his website here.