One of the great ironies of the last few years has been the explosion in popularity of the animated GIF. Just as browsers were finally starting to embrace cutting-edge technologies like WebRTC, WebSockets and WebGL, a technology first supported by Netscape 2.0 in 1995 completely took over cultural landscape on internet. You can’t read a sports blog, a tweet or even go to a technology conference without running into the humble animated GIF.

Despite the popularity of animated GIFs, the tools for making them aren’t great. Personally, I wanted something simple that I could use to convert cute videos of my kids on my phone into animated GIFs. Now, there are several tools for converting videos to animated GIFs on your computer. Recently some developers from Yahoo released Gifshot, a tool that converts videos into animated GIFs inside of your browser using open web technologies. But I wanted to build a web service, so I needed to rely on software that was either built-in to or could be easily added to a standard Linux server distro. After some trial and error, I landed on the following combination of technologies:

You can try out a hosted version of the app I built by sending a short video (think Vine, 6 seconds or less) to:

After being notified that your video has been queued, you should receive an animated GIF version of your video. In this blog post we’ll walk through the process of building this app from scratch by spinning up a Linux VPS, installing the necessary software on it, building a simple Node application to orchestrate the conversion of videos to animated GIFs and wiring it into a Twilio number. This is what you will accomplish when you’re done:

What You Will Need

Here are the two things you’ll need to get started:

For the purposes of this blog post I’m going to use a Digital Ocean droplet to power this service. If you already have an Ubuntu VPS with Node.js installed you can skip ahead to Step 2.

Create a Digital Ocean account and get a free $10 credit with the code twilio10. Once you’re logged in click on the “Create” button to spin-up a new droplet (this is what they call a VPS). 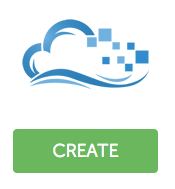 Give your droplet a name and select the smallest plan. 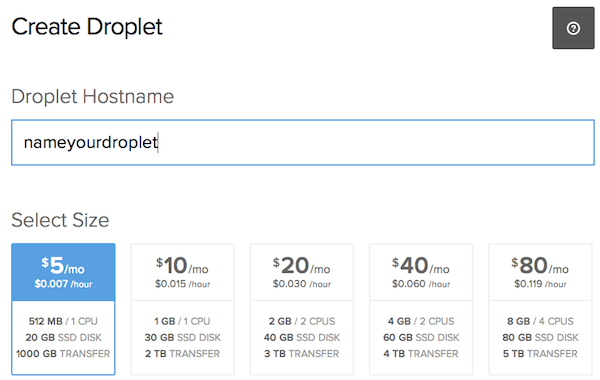 Scroll down and under the “Select Image” section click on “Applications” and then choose the Node/Ubuntu image. This will spare you from having to manually install Node on your new droplet. 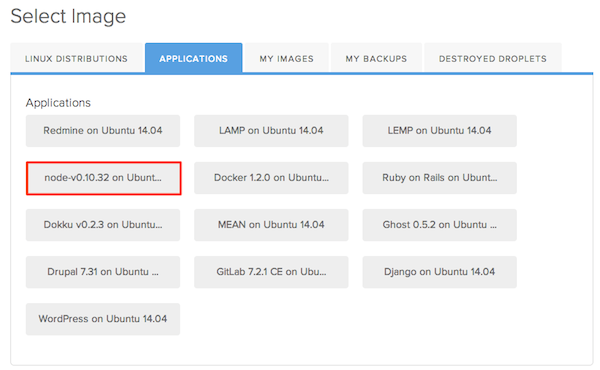 Finally, click on “Create Droplet”. Once your droplet is up and running the root password will be emailed to you.

Now it’s time to install the binaries that we’re going to use to process video and create animated GIFs. Open up a terminal program on your local machine and SSH into your droplet. If you haven’t already, please create a non-root user and grant that user sudo privileges. Next, install libav and imagemagick:

Libav is a set of programs for processing video and you’re going to use the program  avconv to pluck frames out of the video you receive from Twilio. Make sure that it’s working on your system as it should by creating an animated GIF from a video.

Here you are passing in a video in the 3gp format.  If you’re curious what video formats that avconv supports on your system just run avconv -formats.

Here is an explanation of the flags used in the example above:

The last parameter to the command tells avconv what to name the output files. The “%03d” is a special mask that avconv will use to number each of the files starting at 1. If all goes well you should end up with 48 (or less) jpeg files in the  tmp directory.

Like libav,  imagemagick  is a set of programs for manipulating images. Use the  convert program to stitch the frames together into an animated GIF:

There are the flags I’m using:

You should now have an animated GIF named bouncing.gif in your directory. Take a look at that GIF in your browser using Node.

In your home directory create a new application directory and initialize node:

When you run npm init  the process will ask a series of questions to help set up your Node application and create a package.json  file. Give it any name you like and use the default entry path ( index.js ). Next, add the node-static module to your app:

This module will make it easy for us to serve the generated GIFs as static files. Now edit index.js  and add some code to serve static files:

In your application’s directory create a subdirectory called  public  and copy the animated GIF that you generated earlier into the that new directory. Now start-up your Node server:

Open up a browser and go to the IP address of your VPS at port 3000 and append the name of the generated GIF:  http://your_ip_or_domain:3000/bouncing.gif

If everything is working you should see this:

Step 5: Receive an MMS from Twilio

Now that your system can successfully convert videos into animated GIFs, it’s time to add some logic to your Node application to accept video content from Twilio, orchestrate its conversion and return the animated GIF. Add the following modules to your project. I’ll discuss what these modules do as you build out your service.

Go ahead and open up index.js  and add the following code to the top:

The url module is built-in to Node and will give you an easy way to get information about each web request to your Node application. You might ask why I’m not using a framework like Express or Hapi to build this application. The answer is that this application handles only two kinds of requests and doesn’t do anything fancy with the inputs or outputs. I felt like this was a good opportunity to keep things close to the metal.

Modify your HTTP server code to parse the incoming request and invoke the   handleMessage  function when the path is /message .

In the  handleMessage function, you need to determine if the media you’ve been sent is indeed a video. If so, send the user a message that their video has been queued and will be processed shortly. If not, send them a message letting them know that they need to attach a proper video file.

Now that you have a URL to a video file you can create a function called  processVideo to handle the conversion of this file into an animated GIF.

At a high level there are a few things that  processVideo  needs to do:

Since there will be files created during this process (some of them being temporary and subject to later deletion) you can use the node-uuid module to create a practically unique prefix for these files.

The os.tmpdir  function returns the operating system’s temporary directory which should be available for you to create and delete files in. The  request  module helps you fetch this URL and save it to the temporary directory with the filename of the generated UUID. When the download is finished its time to kick off the processing of the video.

Exec takes a string that represents the operating system command that Node will execute. This command will be identical to what you executed manually earlier. The util module helps to format the command string with variables representing the operating system’s temporary directory, the UUID and the current directory of the Node process. Notice that you are chaining 3 processes together using the && shell operator. This has the effect of only executing subsequent commands if the previous command executed without error.

The second argument to exec is a callback. If any of the processes returned an error, send the user an SMS apologizing for the error. If there was no error, you can write a sendGif  function to send an MMS to the user that includes the generated animated GIF.

In order to send an MMS back to the user you must construct a fully qualified URL to the animated GIF. Twilio will fetch the animated GIF from this location in order to construct the MMS that it delivers to the user. This is easy to do using the host information included in the request headers and the UUID you generated.

Whether the exec process succeeded or not, make sure to clean-up all of the temporary generated files. The glob module makes it easy to get all of the files in a directory that match a given mask.

Save the index.js  file. Now it’s time to wire this app to your MMS-capable Twilio number and take this app for a test drive!

The TWILIO_CALLER_ID should be set to same number you’ll be using to receive messages on. Now, start the Node process:  node .

Go to your Twilio account dashboard and click on the number you are going to use. Update the Messaging Request URL  to point at your VPS on port 3000 with a path of /message . Make sure to select HTTP GET , your code is expecting GET parameters to be passed. Click “Save”.

The moment of truth. Send a short video (6 seconds or less) to your Twilio number. You should get an immediate response that your request has been queued, followed by a response that includes the newly minted animated GIF. 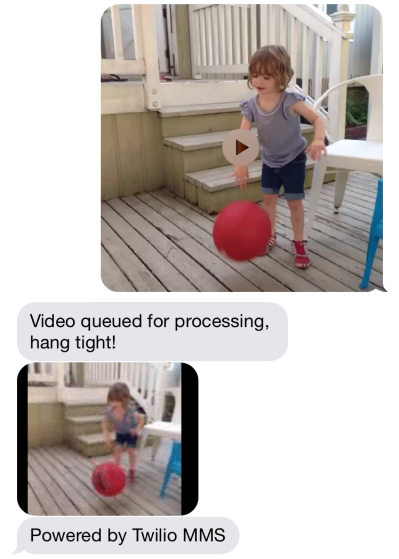 In this blog post I walked you through using Node.js to convert videos sent to a Twilio phone number into animated GIFs. This included:

There are two exercises left to the reader that are necessary to make this a more robust service:

All of this code is hosted up on Github: https://github.com/crabasa/gifit