I’ve been having fun with the Twitter and Twilio APIs recently. First was the release of a tool to send and receive Tweets using SMS and Twilio. In part 2 I started to dig into how the app was built, starting with how to send a Tweet with SMS. Now it’s time to look into how the other side works: how to send SMS notifications when particular events happen on Twitter. This is going to get a bit more complicated than part 2 so strap in, grab the code so far from GitHub and let’s get started.

For this feature, we want to be able to send an SMS to our phone when events we want to know about happen on Twitter. For the purposes of this application those events are direct messages and mentions.

To achieve this we could repeatedly poll the Twitter API but we might find the time difference between notifications and when they actually happened frustrating. This may be ok when you’re interested in beer updates from your local shop but Twitter is a bit more real time than that. Thankfully we have the Twitter streaming API which gives us a stream of events as they happen on the platform. Check out an example of the streaming API below:

That’s a lot of data and it’s not even the firehose. The streaming API’s user streams feature gives us all the tweets and activities relevant to a user account. It’s what your Twitter client uses to show you your stream and this is what we will use to listen for the notifications for this app.

So, the plan is to listen to the user stream for our account and send an SMS when a direct message or mention happens. You can use the Twitter gem for the streaming API, but like most Ruby code the gem blocks the process until the stream is stopped. Were we to run this within the Sinatra app we built in the last post we would not be able to simultaneously wait for webhooks at our /messages endpoint and collect and respond to events from the streaming API. Instead, let’s use the TweetStream gem which uses the magic of EventMachine to avoid blocking.

EventMachine is evented I/O for Ruby based on the reactor pattern. You may have heard of other event based systems, like Python’s Twisted or young upstart JavaScript platform Node.js. EventMachine uses an event loop to process incoming events and dispatch them to event handlers.

TweetStream uses EventMachine to process events from the Twitter streaming API and dispatch Tweets to handlers that we define. This is why we are using Thin as the web server for the application. Thin is also based on EventMachine so when you start the Thin server TweetStream is able to use the same EventMachine reactor to process events. Non EventMachine based Ruby web servers, like the default WEBrick or Unicorn, don’t provide a reactor for TweetStream, so the gem becomes unable to listen for incoming Tweets. With Thin we can listen to the Twitter streaming API and to incoming web requests within the same process.

Let’s start with the app we had at the end of part 2. If you didn’t write the code from part 2, you can clone the repo from that point with this command:

We need to add TweetStream to our Gemfile:

Once that is complete, we can get into app.rb and implement TweetStream.

When we start the application, Thin will start the EventMachine reactor. For TweetStream to hook into the same reactor we call it within a block that we pass to EM.schedule:

That is all we need to do to run our streaming API listener and the web application at the same time. Let’s take a look at what to do when we receive a tweet.

First we need to start with some config. Check out part 1 for how to find or create all the correct credentials. Make sure your permissions for your Twitter application allow read, write and direct messages, otherwise only parts of the following will work.

We also need to add one more bit of config to our config/env.yml file. We didn’t need it before but since we’re now sending SMS messages we need to know the Twilio number we are sending from. Grab the number from your Twilio dashboard and add it like:

Once that is sorted we set up a block to receive a direct message and send us an SMS. We need to instantiate a new Twilio client and use it to send the message.

The streaming API sends us all events, even ones we initiated, so we have to check that the direct message wasn’t sent by our account.

We can also set up a block for handling mentions:

In this case, we have to listen to all timeline status messages and pick out the ones that include a mention of our account. You’ve probably noticed we have a bit of repetition here, so let’s tidy that up. Firstly, a method to return a Twilio client will be useful:

Then something to send an SMS message, only the body of the message needs to change each time so we can write:

Now we can use this method to clean up the notification events:

Finally in this block we start the stream with one line:

We can run the application, using Thin, with the following command:

Now, get your friends to send you a DM or @mention on Twitter and watch the SMS messages roll in! 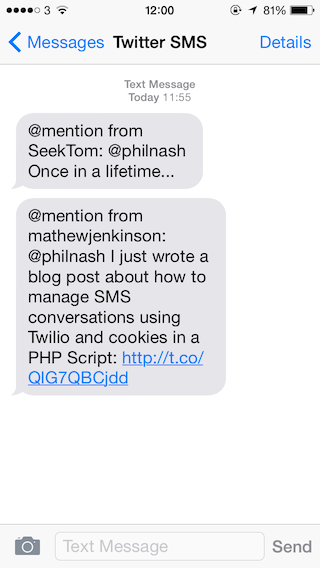 Streaming and web serving in one

There we go: in two blog posts we’ve gone from SMS to Twitter and back again in 62 lines of Ruby. This shows the huge power available to us Rubyists. With a few gems we can run an event based server that listens to a streaming API and responds to webhooks that act as a bridge between our Twitter account and SMS.

If you have any feedback on how I built this or there’s a feature you wish this app could perform, it’s all up on GitHub, so raise an issue or, even better, a pull request.

Any other questions, feel free to drop me a comment on this post or email me at philnash@twilio.com. Or shoot me a Tweet at @philnash, I’m waiting for your SMS!