Signal is almost upon us. That means that in just a few days we’ll be handing out hackpacks to every attendee of the conference. The hackpack contains a littleBits-powered Adafruit NeoPixel 8×8 LED Panel that can be programmed to display whatever you can fit onto its display. If you haven’t already read it, check out our recent post detailing what hardware is in the hackpack and instructions on how to build your own hacks.

Adafruit provides a set of libraries that make it easier to hack on its LED products and developers have used them to create a variety of creative hacks including Christmas tree ornaments and animated sprites. While these libraries streamline the development process a bit they don’t come with a lot of documentation, so they can be challenging to figure out at first. Even though the core concepts of using the Adafruit aren’t too difficult to grok we want to make this learning process less stressful for you so that you can get to building your own hacks once you have the hackpack.

We’re going to create a looping name tag animation that includes a Twilio logo and some scrolling text to let everyone at the conference know your Twitter handle. In the process we’ll learn how the Adafruit_GFX, Adafruit_NeoPixel and Adafruit_NeoMatrix libraries can be used to power your own creations. The animation loop will repeat the following pattern:

Setting Up the Environment 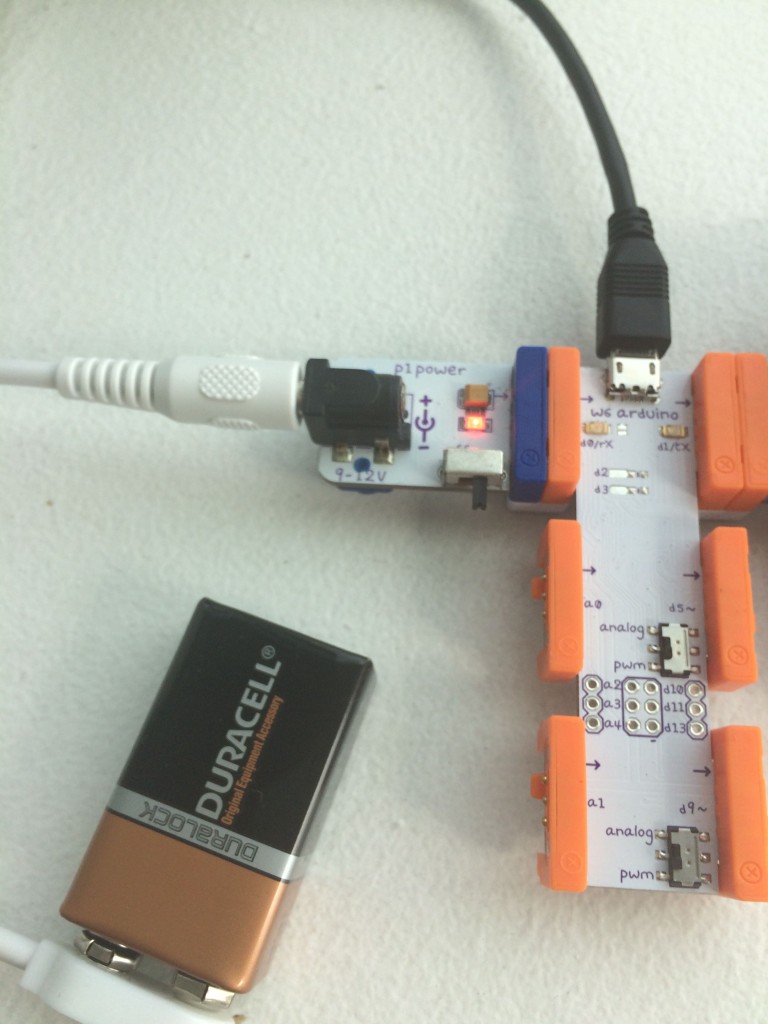 Next, open up the Arduino IDE. Before we can do anything we need to specify which board we are using and which port it is connected to. Our littleBits Arduino module is based on the Arduino Leonardo so select Tools -> Board and pick Arduino Leonardo: 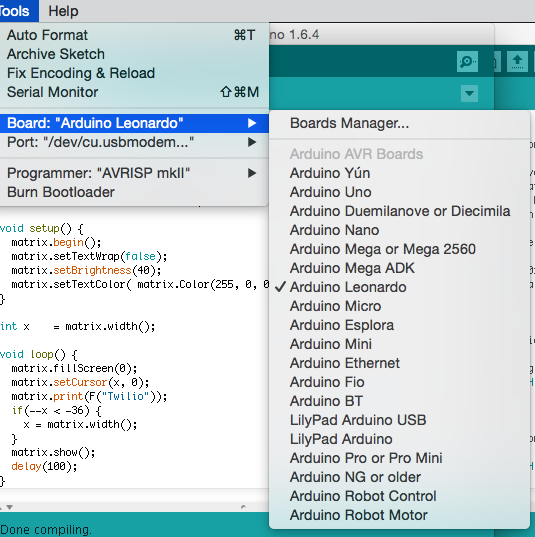 Now go to Tools -> Serial Port and select the port that is identified as an Arduino Leonardo board:

The next step is to install the Adafruit libraries that will help us program the LEDs. Click the following links to download each library:

Unzip each library, remove the “-master” from the name of the folder and move them to the Arduino libraries folder. Restart the Arduino IDE to load the libraries.

Jacking Into The Matrix

Now that we have the Adafruit libraries installed we can create a new sketch using File->New and import the libraries at the top of the file:

Next we define the pin that our NeoPixel panel is plugged into:

Next we’ll initialize our 8×8 matrix using the NeoMatrix library according to the documentation: 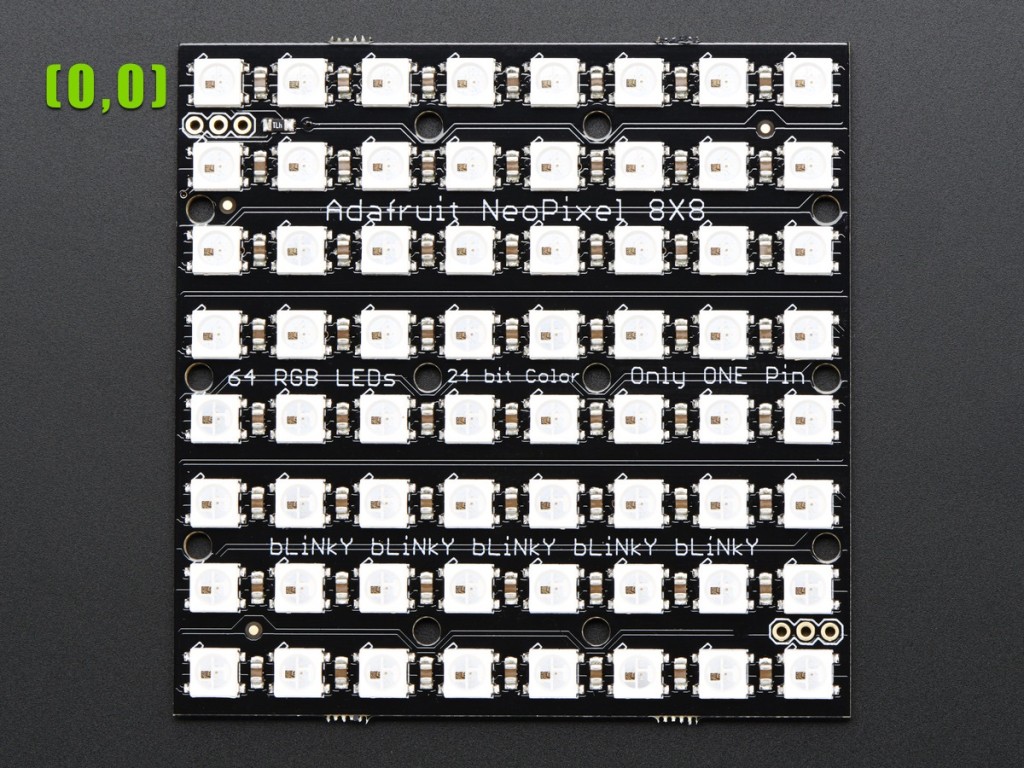 But because you can physically orient the Adafruit display any way you want, when we initialize it we need to tell it which pixel we want to set as the logical first pixel.  We do that by adding NEO_MATRIX_TOP to NEO_MATRIX_LEFT.

The next method parameter  indicates that we want the matrix to be arranged in horizontal lines (or rows) and that each row proceeds in the same direction which is called progressive.

The final method parameter specifies the type of LEDs that are used in the matrix. Our Adafruit NeoMatrix uses LEDs wired for GRB data order with an 800 KHz datastream.

The following image shows how our matrix is set up after initializing it: 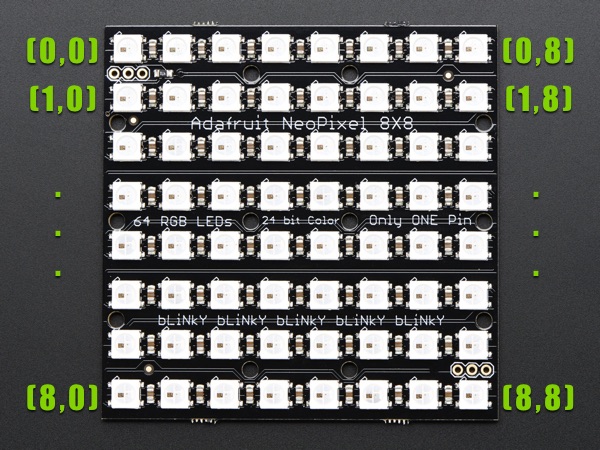 When our application starts up on the Arduino we will initialize the matrix and configure its pixel brightness, text color and text wrapping options:

The matrix is now set up and ready for us to build our name tag. Before we can do that we need to go over the basic building blocks we’ll use for the hack.

In order to build our name tag application we first look at which Adafruit_NeoMatrix library API’s we’ll use to control the pixels in our matrix and how adding a few abstractions over those API’s can simplify the code in our app.

Unfortunately, once created, it’s not very easy to get the RGB values back out of an Adafruit_NeoMatrix::Color, which, as you’ll see later in the post, we’ll want to do that in order to perform actions like color fades.  To solve that problem we’ll make a struct for RGB values. This will make code we write later more manageable since we will have a way to pass RGB values as a single unit and be able to both set and get the individual RGB values on it.

To add the struct click on the triangle at the end of the tab row in the Arduino IDE and select New Tab. When prompted, name the file RGB.h and add this code to it:

At the top of your sketch we’ll include the RGB.h file:

Now to test our struct we can set the top-left LED to red using this code:

The call to matrix.show() is very important. Any changes you make by calling drawPixel(x, y, c) or other functions that manipulate pixels are only made in RAM. We need to flush these changes out to the LEDs by calling matrix.show().

Now that it’s a bit easier to manage a color we can loop through each pixel sequentially and set it to a color creating what is known as a color wipe. Let’s define a reusable function that performs a color wipe in our sketch:

To test it out, add the following code to loop():

Changing the color of pixels one at a time is fun, but what if we want to change them all at the same time?  The Adafruit_NeoMatrix library allows us to fill the entire matrix with a particular color or to turn all of the pixels off using the fillScreen(c) method:

For a little more flair what if we want to crossfade between two colors? This is not something that is built into the Adafruit libraries but it is possible with a little bit of math. What we need to do is, given values for a starting RGB color and ending RGB color, break up the transition between each into equal steps. The more steps we take to get from the starting RGB value to the ending RGB value the smoother the fade will be.

For example if we we wanted to fade the red value of an RGB color, the basic math is as follows:

Changing all three color values within a loop and then calling the drawPixel method lets us create a reusable function that crossfades the color of an individual LED:

If we replace the drawPixel call with a fillScreen we can crossfade the entire screen between two colors:

Using the fadePixel function we created above you can use the following code to draw a Twilio logo that fades in pixel by pixel:

One final thing the Adafruit_NeoMatrix library helps us with is scrolling text. A call to matrix.print will generate a pixel representation of the string passed to it. Manipulating what part of the string is being displayed on the matrix is accomplished by calling matrix.setCursor. By moving the cursor and redrawing the string over the course of a loop we can scroll text on the matrix.

Using those two methods it’s easy to create a function that scrolls text, for example my Twitter handle, from left to right across the panel:

These building blocks are all we need to create our name tag so let’s put the hack together.

We’ll start our name tag app by adding inside of the Arduino loop() function so make sure to remove any test code you may have added earlier. First we’ll fade in from off to a full white screen followed by  a one second delay:

Next we’ll perform a color wipe to set all of the LEDs to red sequentially followed by another one second delay:

With our matrix set to red we’ll now draw the Twilio logo and wait two seconds this time for dramatic effect:

Now we’ll fill the screen back to red and scroll our Twitter handle a few times:

Amazing!  We just built a looping name tag for our hackpack. If you followed along and built your own hackpack name tag, I want to see it! Send me an email or a tweet with pictures or videos of your scrolling Twitter handle or other hackpack hacks and I’ll share them with the Twilio community. Or better yet, come hang out with me at Signal and I’ll help you build your own Hackpack hack whether its this simple name tag, a more complex sprite animation or even responding to incoming text messages to your Twilio phone number.