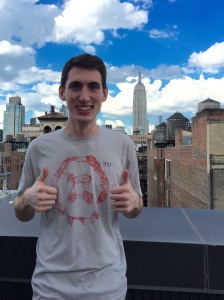 When did you know that you wanted to flip bits and change the world as a software developer? Some members of our wonderful tech community have always known exactly what they wanted to do. However, my introduction to the magical world of programming came a bit later in the game than many others. I owe the community for helping me catch up.

Two years into a math education degree is when the requirement for an introduction to programming class crept up. I didn’t really know what to expect as I copied the code off of the board into my text editor. But after fixing a missing semicolon and watching the words “Hello, World” print out to the screen my life was changed. I’d finally found something that empowered me to build. A change in major to computer science and a transfer to a community college had me raring to recoup lost years. Ironically, it turns out that my community college was actually lacking in the ‘community’ department. Driven to learn at an accelerated rate, I turned to the Internet to supplement my education. This was my first introduction to the developer community and its vastness left me awestruck.

The resources you can find online are boundless. Besides being able to look at pictures of cats and get in arguments with strangers, online communities have made it possible to learn just about anything about, well... anything. I took advantage of this knowledge made accessible by this faceless collection of strangers and started to learn more about the web through Ruby and Rails.

After finishing up my associates degree and transferring to Rutgers I found myself being led to The CAVE for the first time. My head might as well have exploded right then and there at the sheer awesomeness that was the Rutgers hacker community. Before me was a room filled with dedicated and passionate hackers teaching each other and collaborating on projects. I began to understand that the anonymous collection of avatars that lived on the internet were in fact real people from all walks of life.

A few weeks later I found myself in a giant room surrounded by 300 other hackers at my first hackathon. Everyone was here to learn something new and build something cool over the next 24 hours. The realization was that this was still only the very beginning. As long as individuals with a love for building technology exist, this community that I am now a part of will continue to grow and astound me. It is thanks to the shared passion of other developers that I have been able to catch up and immerse myself in this magnificent world. As that happened it became very clear that I wanted to help others become inaugurated into this magic.

My name is Eddie Zaneski and I have joined the Developer Evangelism crew at Twilio in NYC after serving the developer community for the past year at SendGrid. I cherish having the honor and privilege of sitting down with newcomers and watching their eyes expand as they see “Hello, World” appear for the first time. If you’re a veteran, I’d love to sit down and talk nerdy about your latest hack or favorite framework. I am looking forward to meeting you at the next meetup, conference, or hackathon that you attend.