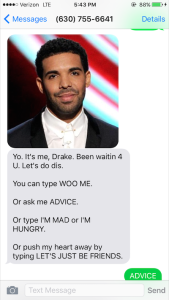 Man, what a time to be alive.

Hassan S. Ali built Botline Bling, an SMS bot for Drakeisms. Previously, if you texted Drake for advice he might reply “This been where you find me at,” referring to the 6 where he was likely riding around with his woes. But not everyone can make the trek to the 6 (Toronto).

Now, thanks to Hassan’s bot, Drake wisdom is available in nearly any situation. If you’re ballin’ in the club with no jersey while someone’s trying to drain you of your energy, text Drake at (630)-755-6641. He’s been at the crib with the phones on.

Take a breath. Hassan and my Drake references will only continue. So far we’re at six, a fitting number for the man who calls himself the 6 God.

Building Botline Bling: As A “Non-Developer”

“I have to be upfront about this: I’m not a developer,” admitted Hassan who recently threaded together the Twilio API, Betaworks and Google Sheets to develop an SMS bot.

“I do know HTML, CSS, some Javascript and a tiny bit of PHP, but that’s about it. I have much love for developers and envy their Jedi powers,” said Hassan, being in full possession of the Jedi powers he admires as an onlooker.

Hassan works at Onion Labs, the creative services division of The Onion. I felt it was only right to satirize his modesty in a bastardized version of The Onion’s signature style.

Hassan built Botline Bling in a minimal amount of time, crediting an awesome bot tutorial from John Borthwick for his swift development process.

He set up the backend in an hour, and integrated Twilio in “literally two minutes.” He connected his Twilio endpoint to a RunDexter server which pulls the Drakeisms that Hassan logged in a Google Sheet. If Hassan wants to update or add responses to his Drake-bot, he doesn’t have to rewrite or redeploy code. He just edits a Google Sheet and he’s done. This design was necessary. The 6 God is constantly evolving, and Hassan’s Botline must respond in kind.


With the bot infrastructure all set up, Hassan got started with the hard work — imbuing his bot with Drake’s conversational essence. Hassan wanted his bot to be more than a run of the mill bot. He chose his Drakeisms carefully. He mapped out possible conversational flows, simultaneously occupying the mindset of Drake fan and Drake himself. After a few iterations, including adding responses to “RAPTORS” “NICKI MINAJ” and “MEEK MILL”, Hassan achieved the marker of success he sought. His bot passed the Cheesecake Factory test. 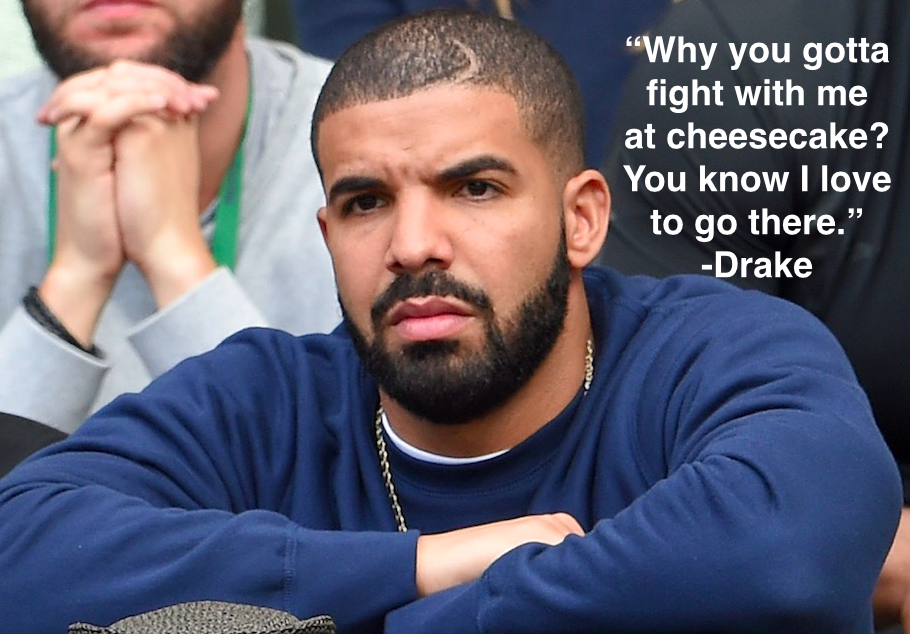 “I liked the idea of you having a text-based communication with the 6 God on your phone, as if he’s your friend with whom you occasionally go to the Cheesecake Factory,” said Hassan.

Just make sure you give Drake lead time to pencil in your Cheesecake Factory date. There are a whole lot of people want to go share some OREO Dream Extreme with him. Hassan received over 5,000 texts within days of launching Botline Bling. 25% of them mention the Cheesecake Factory.

“I wanted the conversation flows, the language, and everything else to enhance the experience of texting with bot-Drake. I think that strategy paid off because people I’ve talked to seem to be having full-on, detailed text conversations with Drizzy, most of which involve, again, meeting up at the Cheesecake Factory,” says Hassan.

In the words of Drizzy himself, I’m about to say something true. Hassan, the real human and non-SMS bot, is the person Botline users should want to take to the Cheesecake Factory. Democratizing the 6 God’s wisdom via text is no small task. There’s no tellin’ what Hassan will build next.

Pro Tips On What To Text Drake

Hassan regularly updates the bot based on what users text in. He added easter eggs that you’ll find when you text “Young Metro”, “Meek Mill”, “Nicki Minaj”, “Raptors”, “Twilio”, or “Cheesecake”.