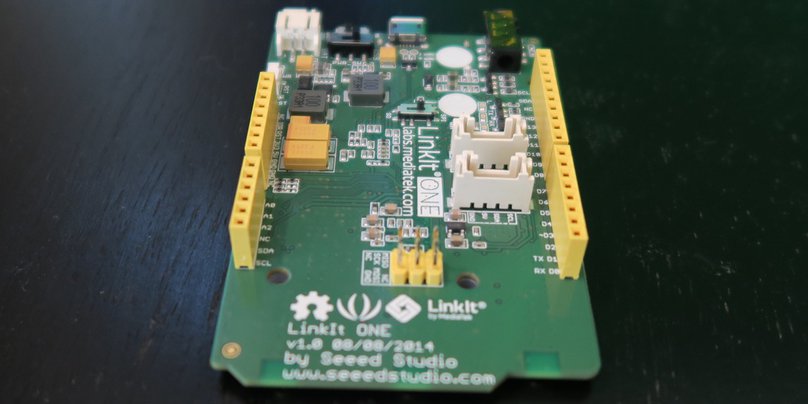 Arduino is an amazing platform for building interactive hardware projects. In the next ten minutes we’ll get our first program running on the SeeedStudio LinkIt ONE development board.

What is the LinkIT ONE?

The LinkIt ONE is a development board that is made by the collaboration of SeeedStudio and MediaTek. It features an ARM7 EJ-S™ processor on a board that is pin-out compatible with Arduino. Onboard you’ll find support for:

It comes with all of the antennae you need for the radios in the device. Here’s what they look like: 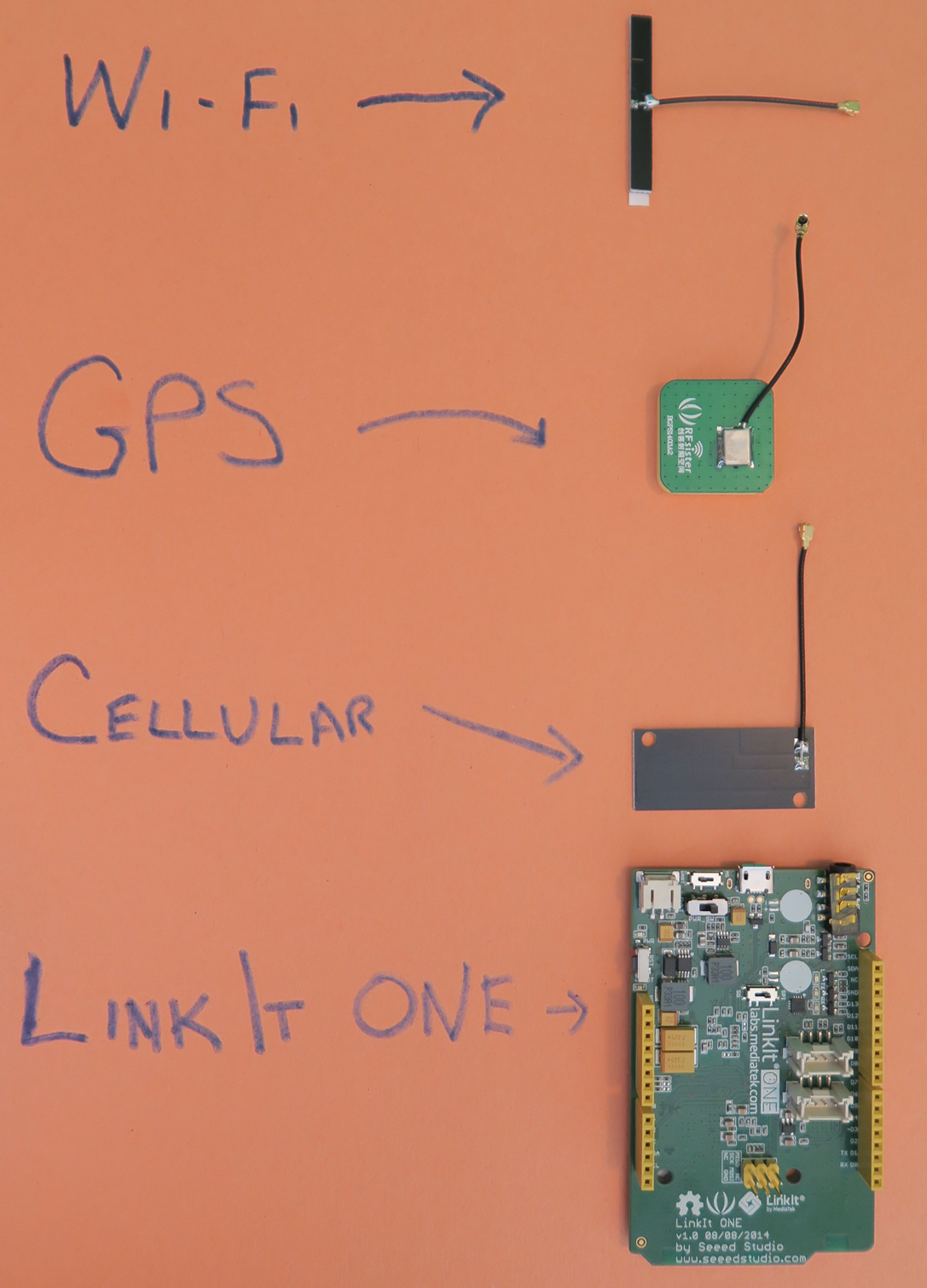 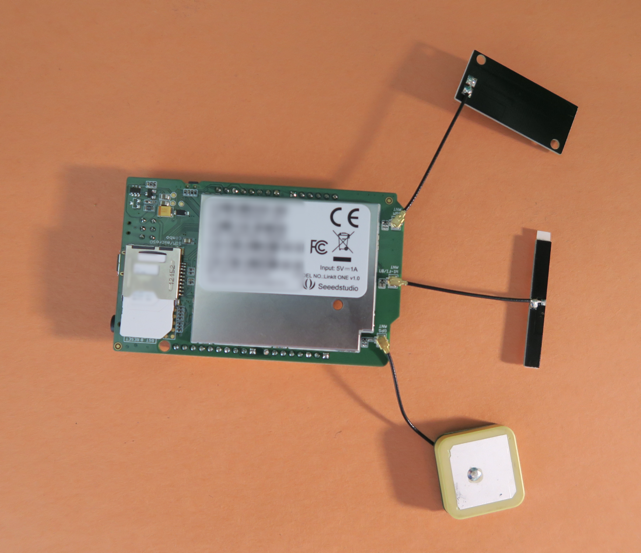 We won’t be using the Wi-Fi, cellular or GPS in this tutorial but with this setup you’ll be ready to go for any hacking you do involving these capabilities.

Now that we have the hardware sorted out, let’s install the software we need to build an app.

Getting Ready for Development

Here’s everything we need to install to program the LinkIt ONE:

MediaTek says to reboot at this point (and several other points) but I’ve found it unnecessary during my installation. Your mileage may vary.

The last step in our installation phase is installing the MediaTek LinkIt ONE SDK. This step is done entirely in the Arduino IDE so open that now.

In the IDE, open the Preferences dialog. On Windows this is in the File menu. On the Mac it is under the Arduino menu item. The dialogs in Arduino IDE look almost identical between Windows and Mac so I’ll just show the Mac version in the following screenshots.

Set the Additional Boards Manager URLs field to http://download.labs.mediatek.com/package_mtk_linkit_index.json and then click OK: 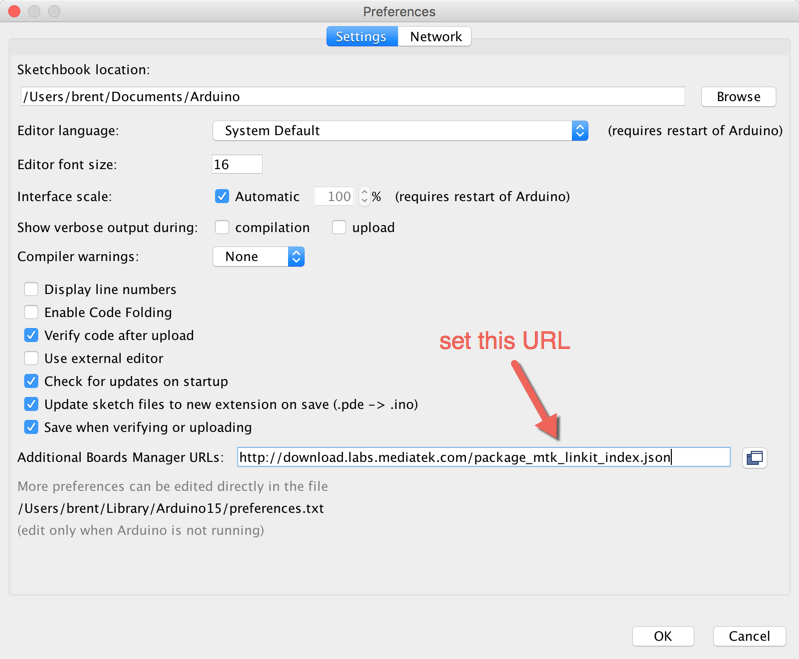 When the dialog opens it will download the latest list of compatible boards and one of them will be the LinkIt ONE. Search for “link” in the search box at the top, click the row for LinkIt ONE and press the Install button: 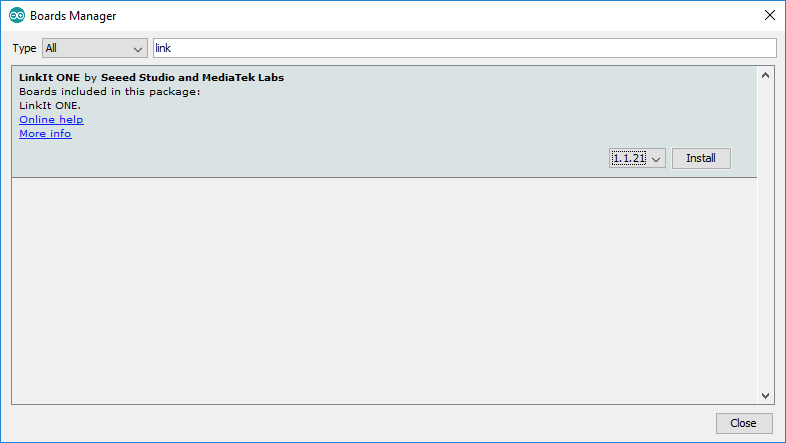 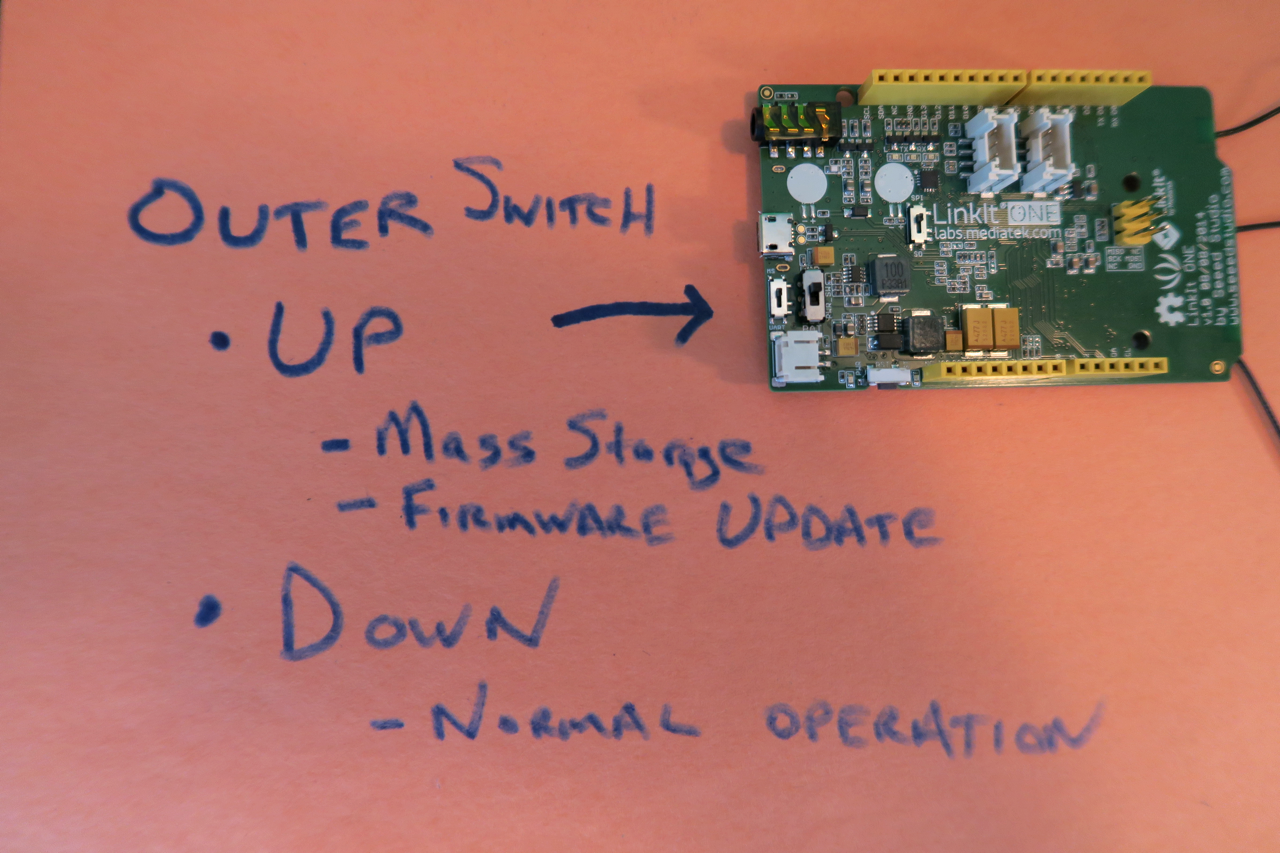 Once you have that switch set correctly, plug the LinkIt ONE into your computer using a micro USB cable.

In the Arduino IDE select Tools->Board->LinkIt ONE: 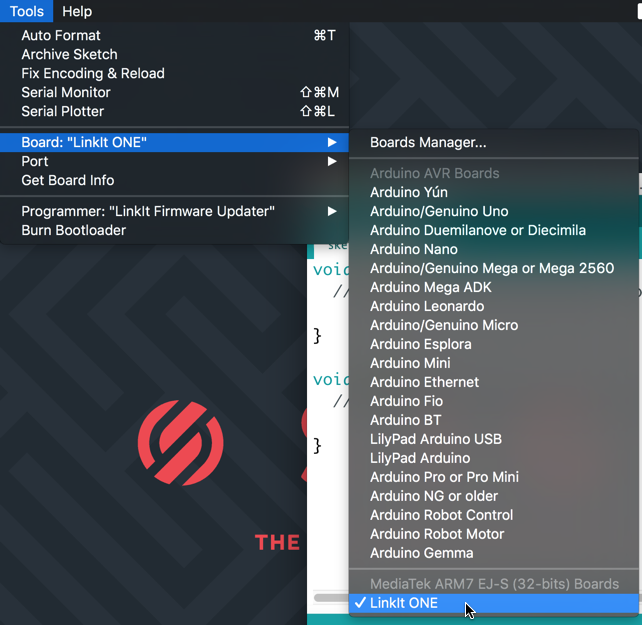 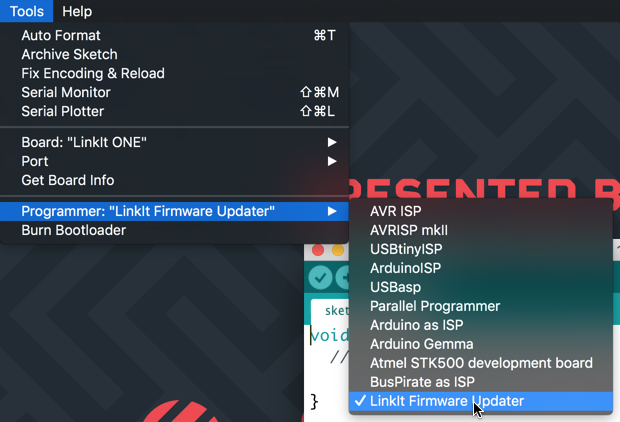 Select Tools->Burn Bootloader to launch the LinkIt ONE Flash Tool: 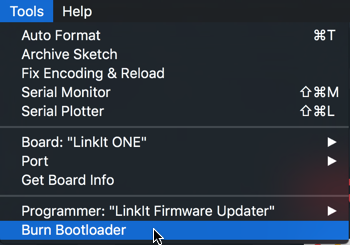 When the following screen appears, unplug your USB cable and replug it in again and the upgrade will begin automatically:

When it’s done, flip the outer switch back to the down position for normal operation mode. That’s all for configuration. Let’s write our first Arduino program for the LinkIt ONE.

In the Arduino world there’s a canonical ‘Hello World’ that is the simplest program you can write to show physical output. The program is called Blink and running it on an Arduino board makes the onboard LED connected to digital pin 13 blink on and off. On the LinkIt ONE you can find that LED here: 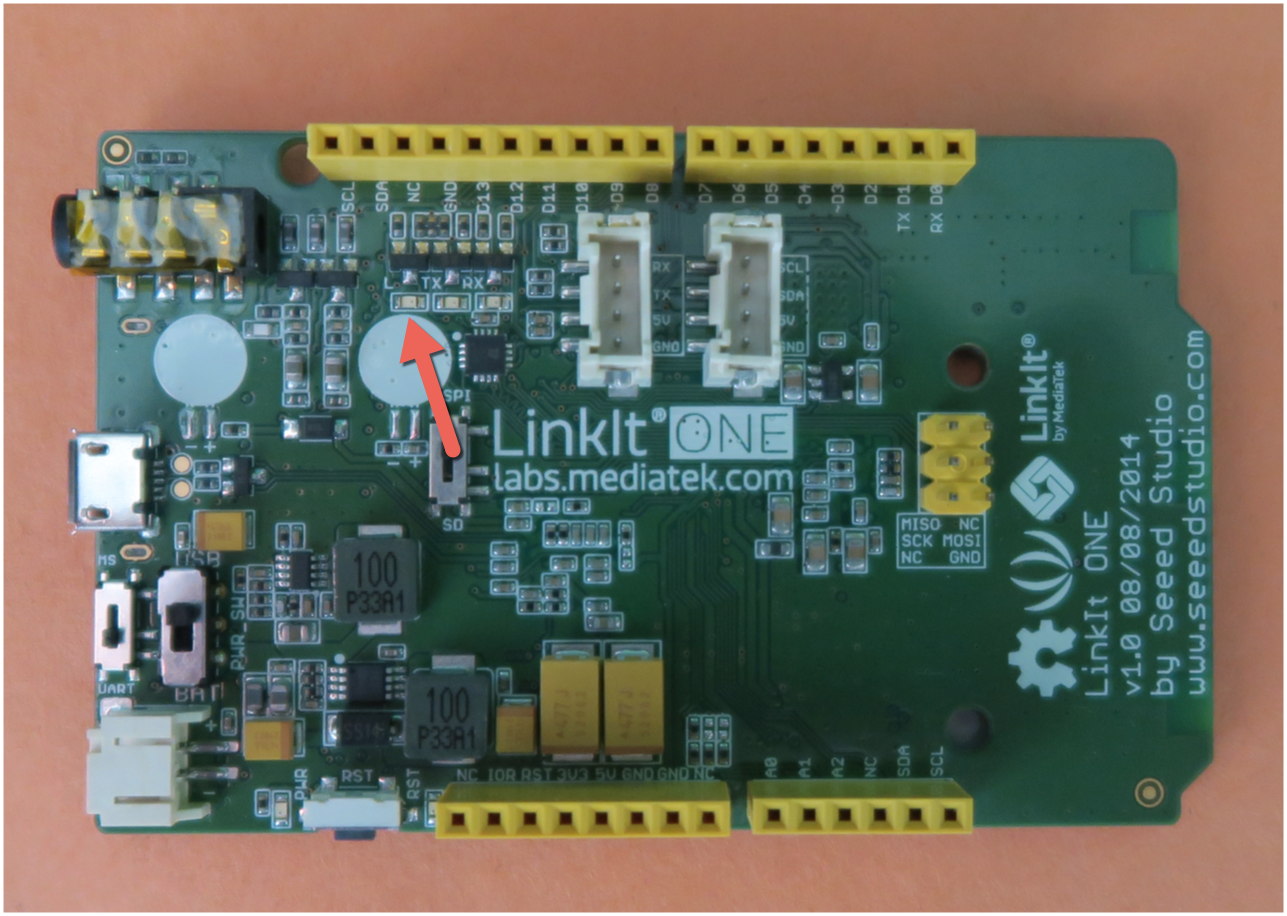 Arduino programs, referred to as Sketches with a .ino file extension, are written using two functions: setup() and loop(). The setup function is used to, as you probably guessed, set up anything that needs to be configured before the main program runs. This is where you’d configure your input and output pins, set up network connectivity, initialize values, etc. The loop function is the main program and it repeats indefinitely.

Our setup function will set pin 13 as an output pin. We can write the value HIGH to that pin to turn the LED on and LOW to turn it off. Create a new Sketch if you haven’t already and replace the setup function with the following code:

We’re ready to upload our Sketch to the LinkIt One. Under the Tools menu select Port and then choose one of the ports that ends with “(LinkIt ONE)”:

Click the Upload button to compile and load your Sketch onto the LinkIt ONE. If everything is configured correctly the Sketch will start running on the board and you should see the LED blink off and on.

Congratulations on writing your first program on the LinkIt ONE!

Now that you have your LinkIt ONE board up and running, feel free to use your imagination on what to build next. Here’s some things you might consider doing next:

I’m really excited to see what you build with this device. If you’re coming to SIGNAL you’ll be receiving one of these devices. Come say hi at the Hackpack station and let’s talk about what you might build with it. If you have any questions or comments you can find me on Twitter @brentschooley or email me at brent@twilio.com.