Have you built a Contact Center, Click-to-Dial, or Voice Notification solution using Outbound Voice or Elastic SIP Trunking with calls localized in Europe? Yes? Then read on to find out how you can save money.
This month Twilio expanded its coverage of Origin-Based Pricing by adding Belgium and Netherlands now for a total of 19 European countries. Prices to these 19 European countries have dropped an average of 72% compared to the rest of world and are now $0.13 per minute less expensive compared to other providers. This means calls that stay local within Europe can realize significant price reductions—all you do is set the Caller ID with a qualifying local EU/EEA number you own.

This opportunity for price reduction can be realized with both:

What is Origin-Based pricing?

Origin-Based pricing means that calls to the same destination have different prices depending on where each call comes from. For example, an Outbound Programmable Voice call to a mobile number in France might cost $0.05 per minute if called from a French number, but cost $0.125 per minute if called from a US number. Origin is determined by the Caller ID of the call. See below for examples.

Why is this happening?

As of 6/2017, cross-border calls within Europe are getting regulated down to local/national rates compared to international rates for calls coming from outside Europe. Twilio has built Origin-based routing so calls are routed based on the Callee and the Caller so calls originating from a European Economic Area (EEA) number are routed to an intra-EU gateway and calls from non-EU numbers are routed through international non-EU gateways. Although the details and applicability for each country and network varies, generally calls from outside Europe into Europe will be more expensive than calls within Europe.

How does this affect me?

Historically, Twilio has charged the same rate to call a particular destination regardless of where the call originated. However, for calls to certain European destinations, we have implemented Origin-Based pricing that results in significant price reductions for most customers. The origin will be determined by the Caller ID information sent when placing the call. Twilio requires that the Caller ID be a number that the customer owns.

Let me show you how easy it is!

All you have to do is Buy a number or Verify a number you own on the Twilio Console from a qualifying country – then configure as your Caller ID – and intra-EU gateways will be selected for your calls and you benefit from price reductions. Below I have bought a local Brussels, Belgium number. Now the calls to Belgium will cost $0.06 per minute compared to $0.13 per minute for calls from the rest of world to Belgium. Here are a few examples of how you might use this feature.

Example 1: Send a Voice Marketing announcement with a REST API

Example 3: With a PBX
Configure your PBX and set the Caller ID to an EU/EEA number you own for Elastic SIP Trunking Terminating calls to the EU.

Do the destinations I care about qualify for this?

Let’s show you an example and explain to you how you can determine if the destinations you need to call qualify for this large price reduction. Let’s use Elastic SIP Trunking pricing for Austria. 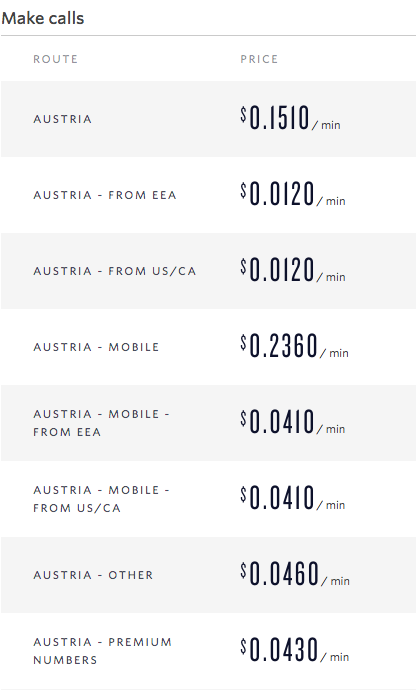 If you need to check a specific prefix then please download the rate decks for Elastic SIP Trunking or Voice. In countries where Origin-Based pricing has been implemented, new routes will end with ‘from EEA’ and ‘from US/CA’ as seen above. EEA refers to European Economic Area and member countries are listed in the table below: 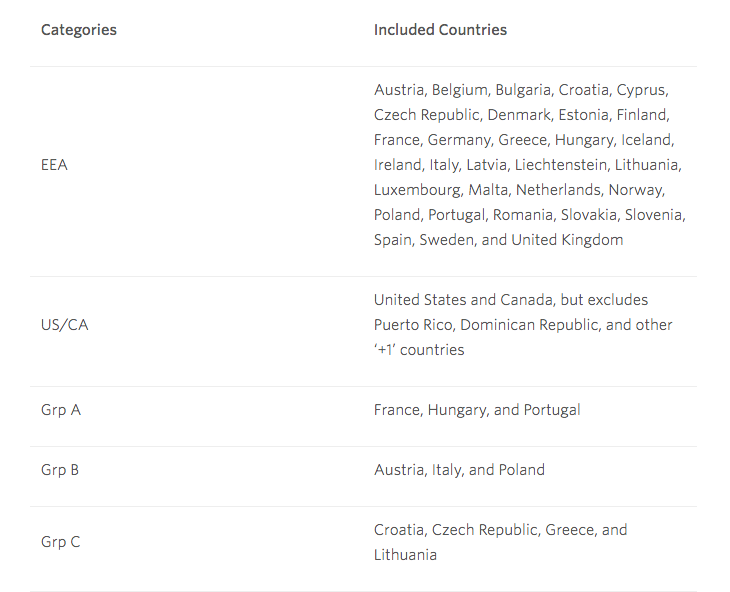