The world of Internet connected devices is exploding and there are billions of things already online. Today we’ll skip the smart thermostats and fridges and move straight to programmable droids.

We use Twilio Sync for IoT in this project, which is currently in Developer Preview. Sign up for the preview, and the team will get you on-boarded.

To keep this project entertaining, repurposable, and extensible, we are going to use the Lego Mindstorms EV3 kit, a popular platform for basic robotics builds. We’ll build an internet controlled lego robot with a real-time web dashboard and even demo touch control.

Follow Lego’s online instructions to assemble the EV3D4 droid. Once you’re done, plug in the WiFi USB dongle to enable direct connectivity to the Internet.

When you’ve got everything assembled, you should end up with something like this: 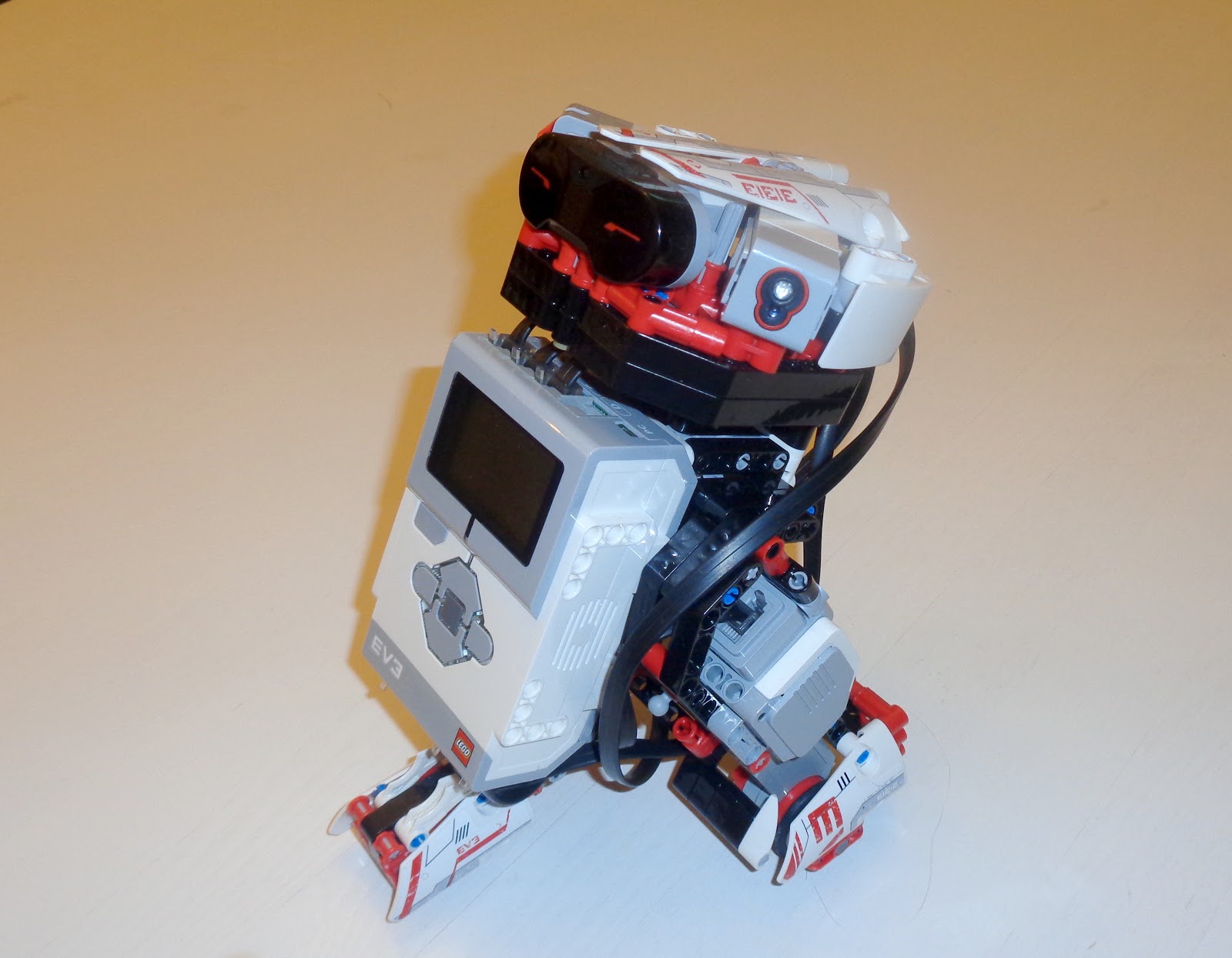 As you can see, this droid has the following peripherals:

Install a Custom OS on Your Lego Robot

We are going to use EV3dev in order to deploy custom applications to your droid. EV3dev is a Debian Linux based operating system that turns Mindstorms bricks into a flexible application platform. Don’t worry, we are leaving your original EV3 firmware untouched. You’ll be able to get back to normal mode of operation anytime by removing the bootable microSD card with the EV3dev image.

Follow the step-by-step instructions on EV3dev’s site to download and install the OS image onto your microSD card. Boot it for the first time and connect to your local WiFi network using Brickman’s “Wireless and Networks > Wi-Fi” menu. 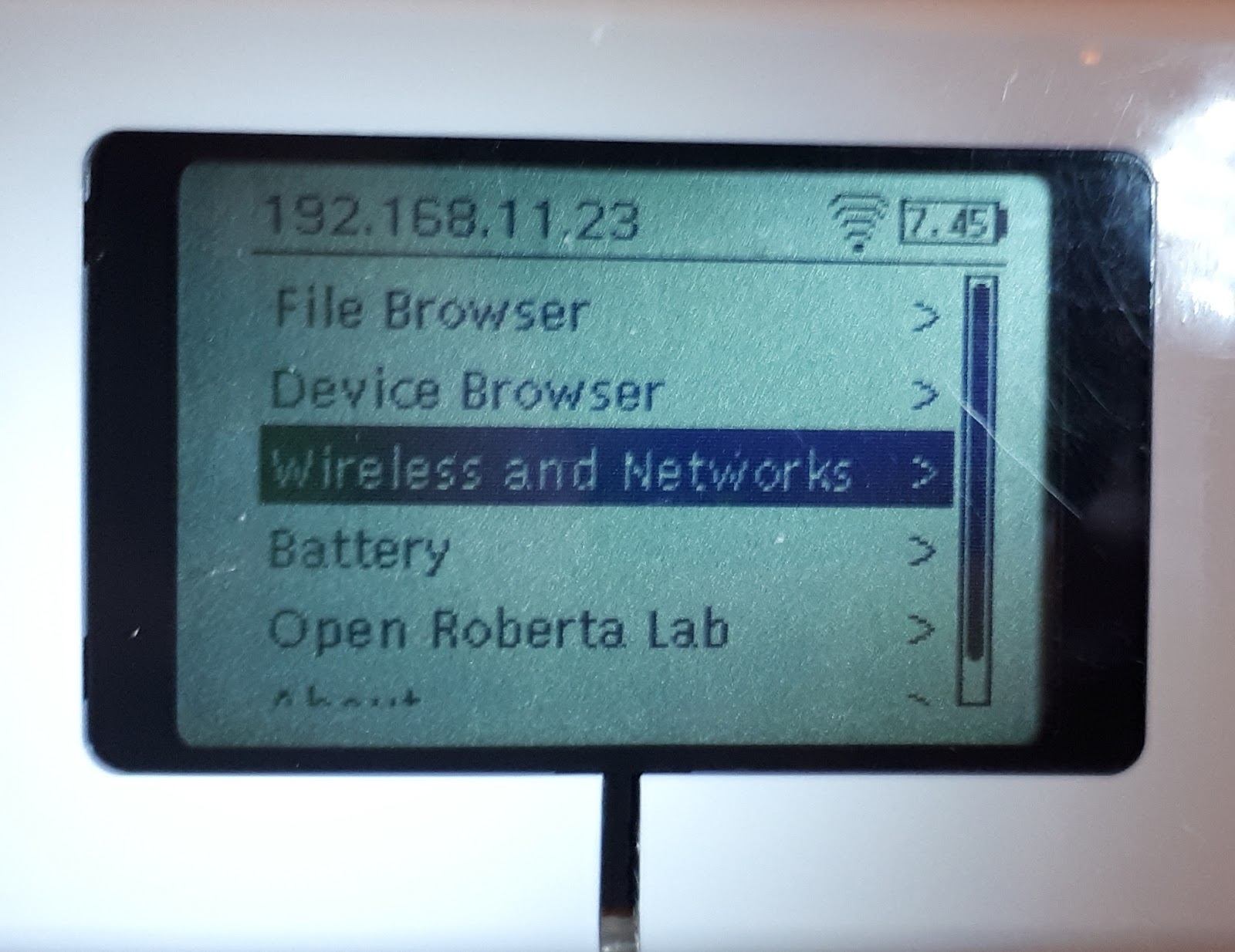 Once booted up and connected to WiFi, try logging into to your droid via SSH. The default username is robot and password is maker; feel free to change it.

Our first application is going to be a basic Python script that connects to Twilio Sync for IoT, drives motors, and captures input from sensors using EV3 Python language bindings.

First, clone our client.py script from GitHub to your machine. On your development host (not on the droid), execute the following to fetch the code and copy it to your robot:

Then, install dependencies. Most of the things we’ll need are already installed, but we’ll need a compact MQTT client in order to connect to Twilio cloud. While connected to ev3dev, execute the following:

EV3 isn’t exactly a blazing fast Linux platform as it’s running on a fairly low-power microcontroller. Give it some time to complete above and have a coffee or tea while you wait. The good news is that it only needs to be done once.

In order to get the droid online and operable, we are going to need to use a few Twilio tools and services.

Up until this point, we didn’t have a way to securely identify and trust the connected droid within our remote control application. Let’s fix that by creating its unique identity and a client certificate for authentication purposes.

Create an Identity with Sync

Navigate to Sync for IoT console and click on “Visit the Device Manager”. We have an empty fleet automatically provisioned for you, called “Default Fleet”. 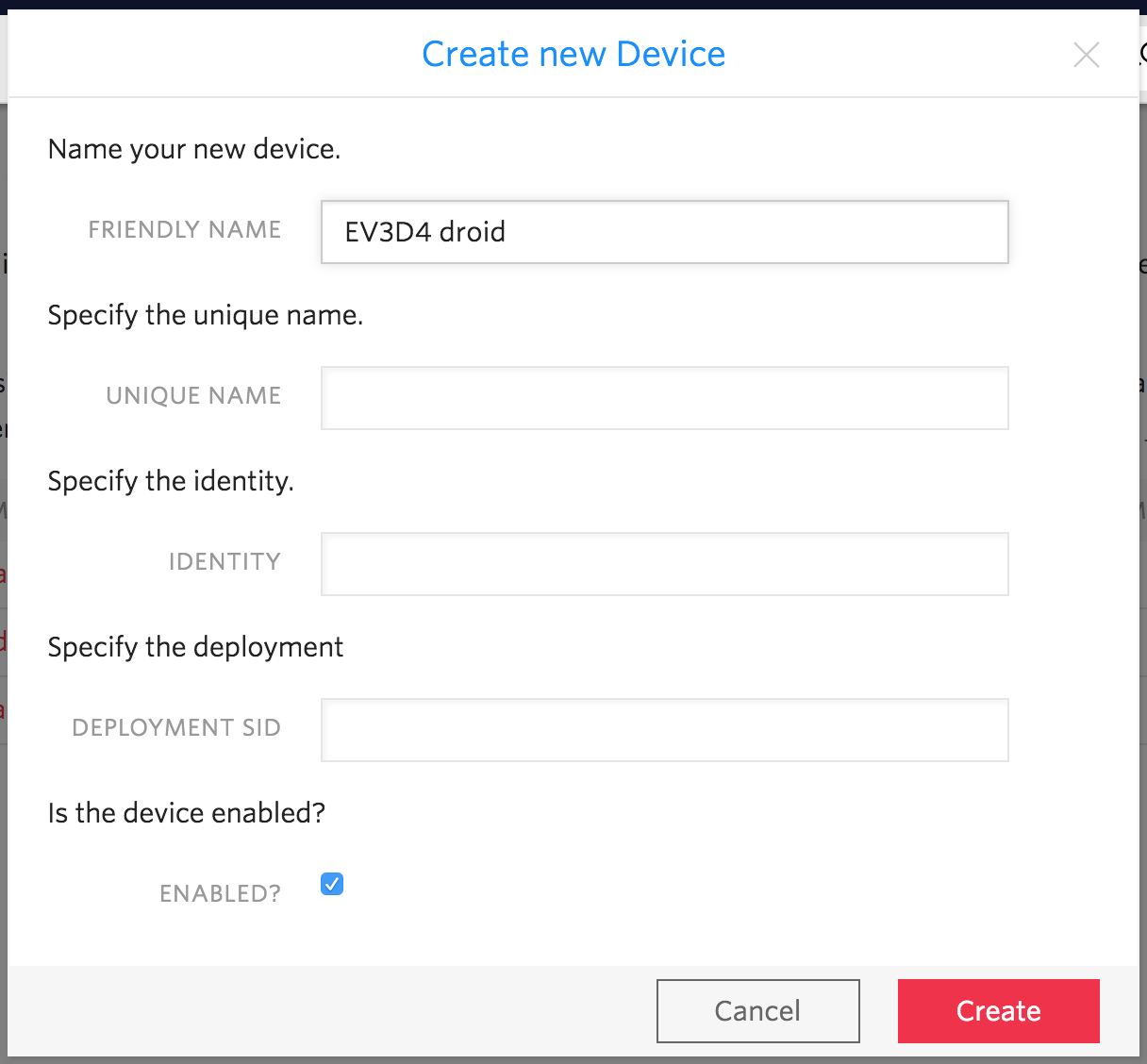 Now that we have established the droid’s identity, let’s add a client certificate in order to authenticate with the backend.

When logged in to ev3dev, go to the home directory where the client.py script resides and generate a new private key. Store it in a file named ev3d4.key.pem. Keep this key secret — it should never leave the device.

Then, while in the same directory, generate a self-signed certificate based on the above key, and store it to ev3d4.cert.pem file. When prompted for certificate attributes, enter whatever you like. It doesn’t make a difference for device management.

This part of the certificate is public, and we are going to copy it to Sync for IoT device manager. Go back to your “EV3D4 droid” device in Twilio console. 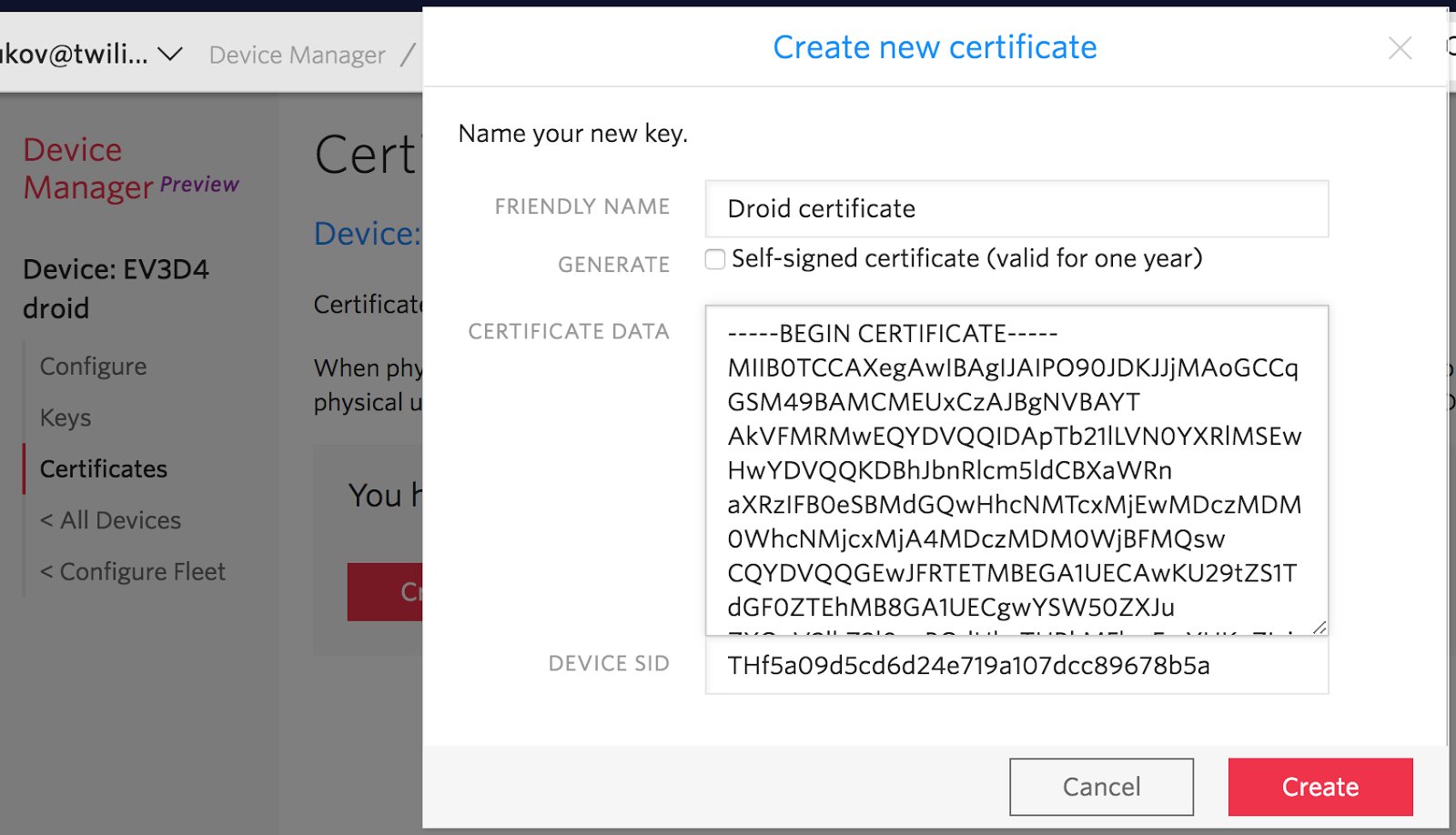 Our controller application is going to be browser based, enabling bidirectional communication between a human operator and the remote droid. We are going to use a couple of Twilio Sync objects to deliver state updates both ways.

The JavaScript controller application is packaged into a single HTML file in our GitHub repository. It relies on twilio-sync.js SDK to do all of the low level state replication and websocket messaging work so that the application is kept simple and lean.

We are also going to make the controller application serverless and execute it using Twilio Assets and Functions. First, let’s upload the HTML/JS code and make it an Asset:

We need one last thing to make our droid controller fully functional. Twilio authenticates your browser application running on an arbitrary machine using a JWT access token, and authorizes access to Sync resources using grants. We are going to construct a Sync token generator and host it as a Function. 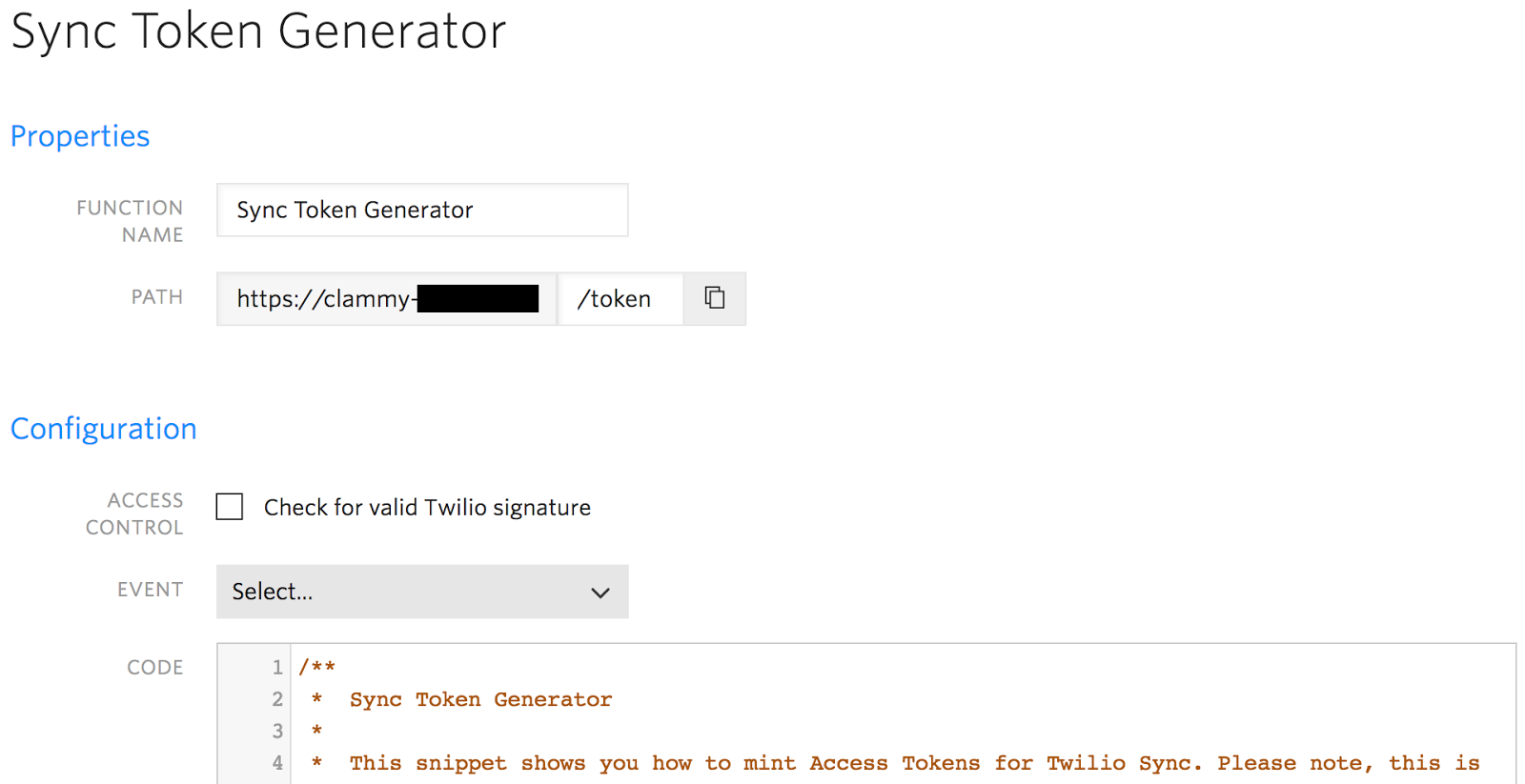 In order for the token generator to apply a valid signature, we will also need an API signing key. 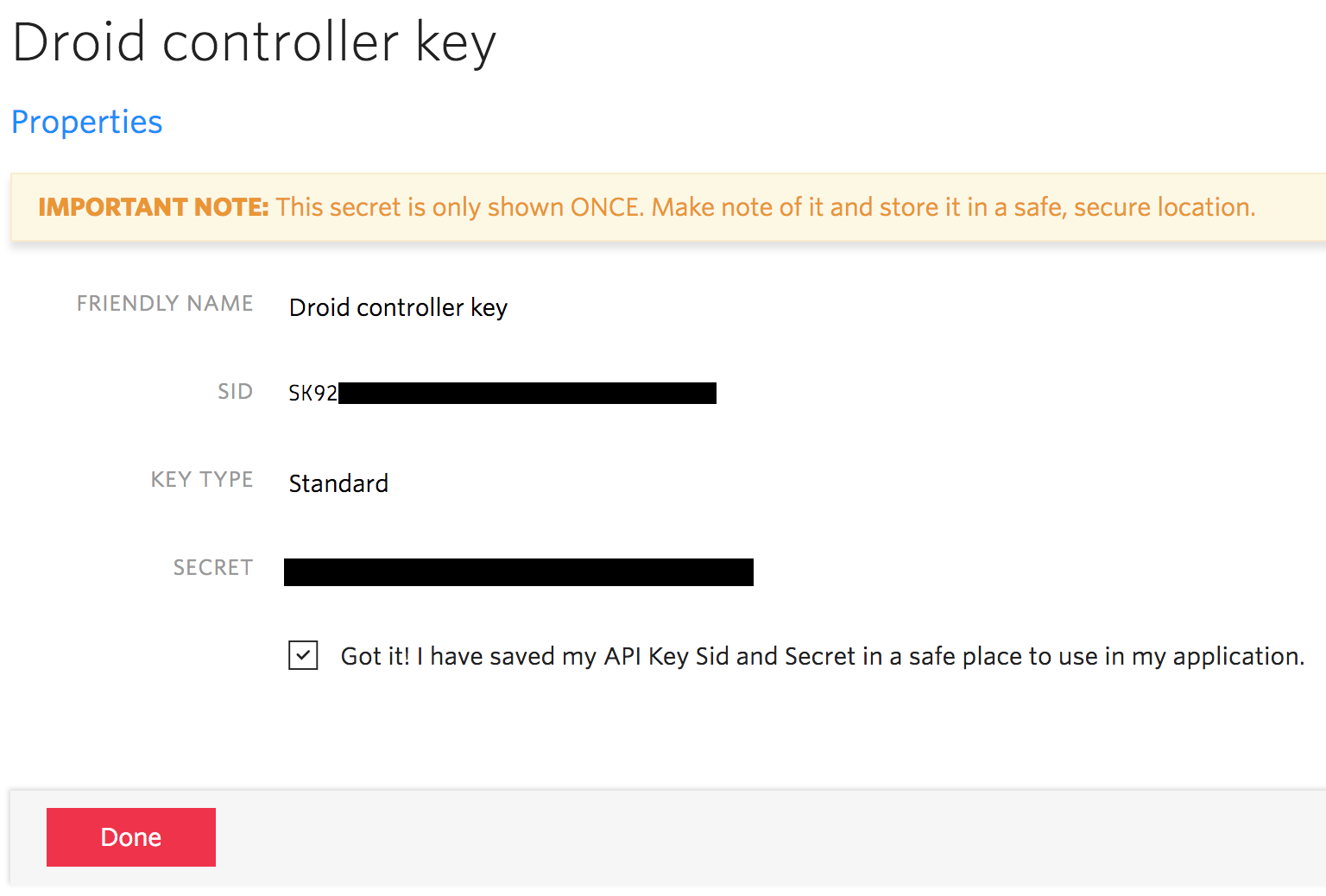 Fire Up the Robot

We’re almost there — let’s put all the components together and make the ultimate test run.

It also works with a trackpad or touchscreen device! Open it on your phone and observe motor and sensor states changing live in all applications. 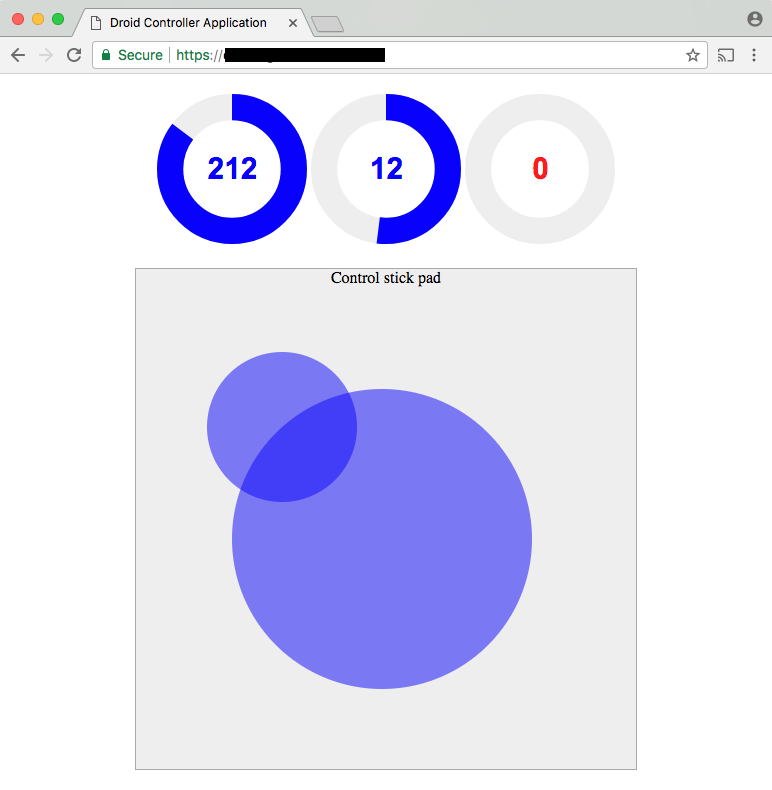 While this project was ostensibly about building a droid, you did so much more. You built a web dashboard and addressed generic remote control and state synchronization issues. Now, you can extend it even further. For example, consider the following tweaks:

Many IoT projects have the same basic problems to solve. They need to enable reliable, secure, low-latency information flow between heterogeneous endpoints: embedded devices, server backends, first-person clients such as browser and mobile phones. Twilio simplifies the development of your IoT applications by providing a set of basic building blocks similar to Legos. Combining these blocks and APIs allows you to reduce your costs and move faster from concept to prototype to production application.

We can’t wait to see what you build next!

Andrei Birjukov is a technical lead at Twilio, living and working in Tallinn, Estonia. A long time gearhead and system software enthusiast, Andrei was formerly an engineer and development lead at Skype and Microsoft. You can reach him via email at andrei@twilio.com.