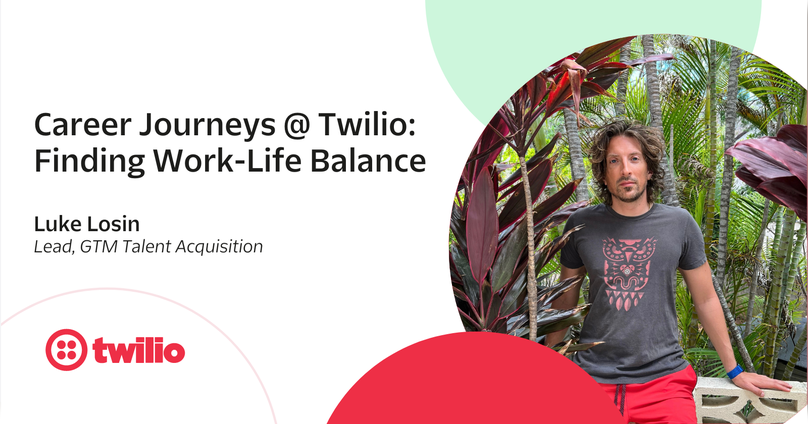 FunFact: Luke has two middle names and may or may not be of royal descent. 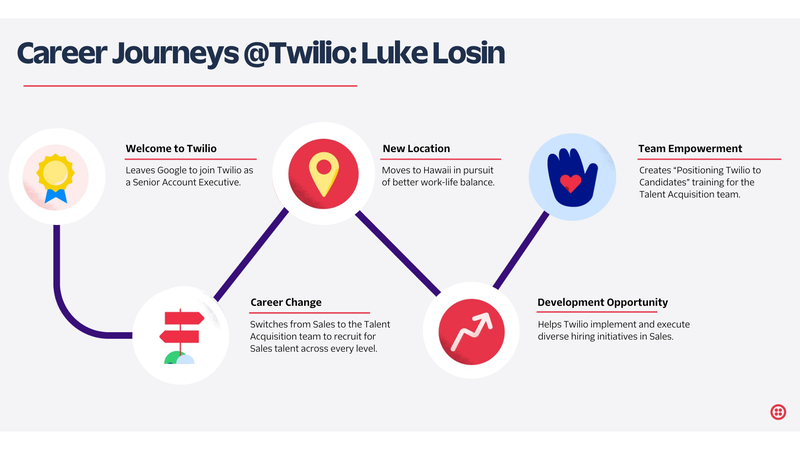 Ingenuity and resourcefulness have been a hallmark of Luke Losin’s Twilio career since his first day as a sales exec in Silicon Valley.

Today, as the Talent Acquisition Lead for Twilio’s Go-To-Market team, Luke’s mission is to recruit new Twilions. And in the true spirit of a Builder and Owner – key Twilio Magic Values – he also helped pioneer a pilot program for remote work before it became a workplace norm.

At Twilio, Luke has found a way to deliver high performance and contribute to the growth of his whole team while also maintaining a healthy work-life balance.

After a five-year run in sales at Google, Luke began searching for an opportunity to make a meaningful impact at an emerging technology company.

At the time, Twilio had only 700 employees — compared to Google’s 70,000. Luke was drawn in by the opportunity to help shape the company’s growth at a still (relatively) early stage.

Leaving a well-known brand to work for a less familiar start-up would seem like a risky choice for some, but Luke was confident in both Twilio’s future and his own. “I went from a sales role at Google to a sales role at Twilio. It sounds like a lateral move, but, for me it was an upside play,” he remembers.

The products and solutions he sold while working for former employers were unlike the Twilio offering, as were the customers. Still, Luke was adaptable and learned to apply what he knew about tech sales to his new role. “Selling Twilio was very different,” he says. “I had to quickly learn a very complex set of products, which was both challenging and fun.”

Joining the Twilio team was a significant paradigm shift from Google, but Luke was extremely ready and willing to take it on. He performed exceptionally well in his sales role at Twilio but soon noticed his interest in sales as a career beginning to wane. However, Luke’s passion for Twilio remained strong, prompting him to seek new ways to contribute to the mission.

After some time and a bit of research, he found a new use for his skills: recruitment. “Recruiting employs a lot of sales tactics, where you are actively selling the opportunity rather than selling the product,” he says.

Luke met with his managers, and together they mapped out a plan to switch to recruiting — specifically recruiting sales talent. “I had done the job well myself, so the transition made total sense,” he says. 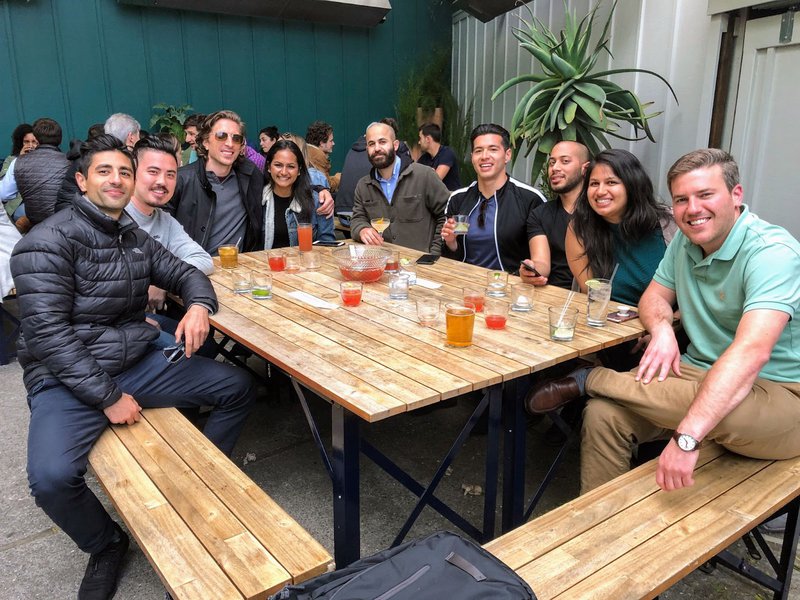 The decision to move from sales to recruitment created a catalyst for change in multiple areas of Luke’s life. He was beginning to burn out in Silicon Valley. It was true that during his residence there, Luke had established many positive relationships with people in the tech industry and was grateful for his connections, but the constant tech talk wore him down.

Even off the clock, Luke recalled, it felt like every conversation centered around technology. Desperate for a healthier and more manageable work-life balance, Luke found a solution that could help him achieve his personal and professional goals — a move to Hawaii.

After years of traveling to the island state and falling in love with the culture, he longed to live there. But asking to move to a place most people see as a vacation spot felt risky, especially since business values at the time — including Twilio’s — heavily favored on-site work at a corporate hub. For reference, this was a year before the pandemic of 2020 and several years before Twilio announced it was becoming a remote-first company.

Prior to making the request, Luke spent months acclimating himself to his new role as a recruiter. Once he felt confident about the value he was adding in the new position, he approached his managers about switching to remote work. They said yes, and he made the move to Oahu.

The result, according to Luke, is “an extraordinarily healthy work-life balance,” one that has been positive for both his personal wellbeing and his professional performance. “This is literally my happy place.”

Empowering Other Recruiters Through Thought Leadership

Luke’s passion for finding the best talent is contagious, and he inspires and empowers other recruiters to take their efforts to the next level.

His experience pivoting from sales to recruiting within Twilio is unique, and he generously shares what he’s learned from those experiences with his team members. As Luke has continued to grow as a sales recruiter, he has become the go-to source when other Twilions need help with complex recruiting situations.

And he’s good for more than one-off advice. For example, Luke created the “Positioning Twilio to Candidates” training module that every new Twilio recruiter must complete as part of the onboarding process.

Luke also plays a significant role in driving Twilio’s efforts to attract and hire more diverse talent, recognizing that his team would need more support to accomplish this goal. So, in 2020, he sought out a partnership with an external talent sourcing agency that could specifically help Twilio recruit diverse candidates for executive roles.

There wasn’t an established process in place for this kind of engagement. To make it happen, Luke and his team had to author an entirely new course of action — a practice that Twilio refers to as ‘drawing the owl’, he recalls. “We had to find a budget for the initiative, find ways that we could work cross-functionally, develop our own procedures, and make sure that it was all communicated effectively with human resources and our legal department.”

The initiative has been a success, filling several critical leadership positions with candidates who may not have otherwise been on Twilio’s radar. This endeavor demonstrates Twilio’s commitment to diversity and inclusion, Luke says, and he sees that as a critical stepping stone to the organization’s goal of being actively anti-racist. “The net-net was awesome.” 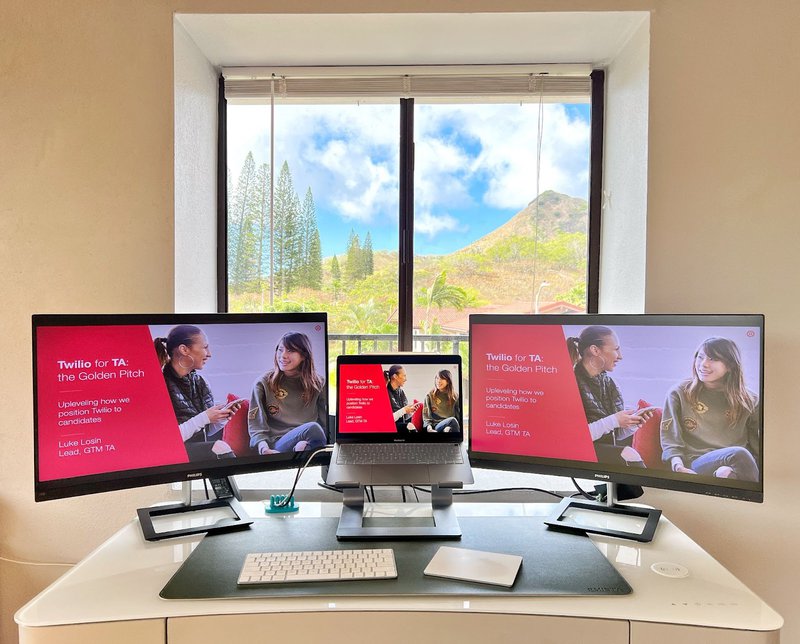 Luke is an evangelist for what Twilio calls its Magic Values – and as a result, he is adamant about hiring candidates who also align with those values. “Twilio Magic Values are key to ascertaining a candidate’s long-term potential to be impactful,” he says.

His career journey, in many ways, represents the epitome of Twilio’s values. He’s a Positron who has inspired others to elevate their own work. His Curiosity has driven him to seek creative solutions to challenging problems. And as a Builder and Owner, he’s always looking ahead to what’s next for Twilio and how he and his team can help the company get there.

“I’m enjoying Twilio life. I think there’s a lot of building left to do,” he says. “The solution that we offer the public is very compelling, and we’re decidedly the leader in it, so there’s a lot of headroom.”