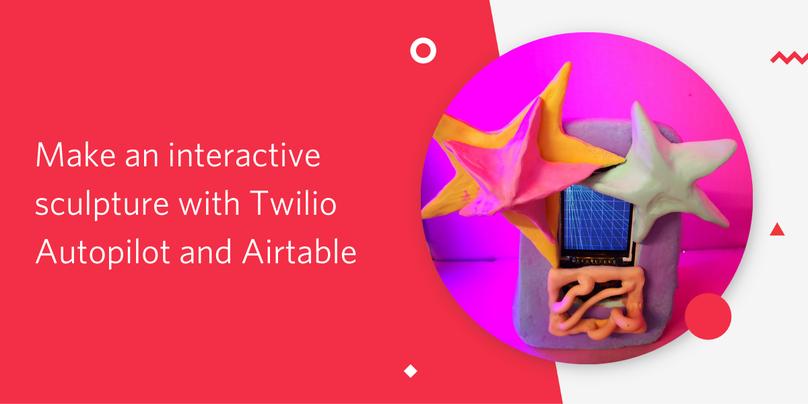 In a previous tutorial, I described how to build a text-based messaging game using Twilio Autopilot, Facebook Messenger, and Airtable.

Now, it’s time to bring that data into the real world, with a creative display of all the data from Twilio Autopilot that is being stored in the Airtable database.

In this tutorial you’ll learn how you can make a small internet-connected sculpture that displays how players respond to each question stored in the Autopilot task. You’ll use a wifi-enabled microcontroller to read data from Airtable and to display the data on a small LCD screen that would be embedded in the sculpture. 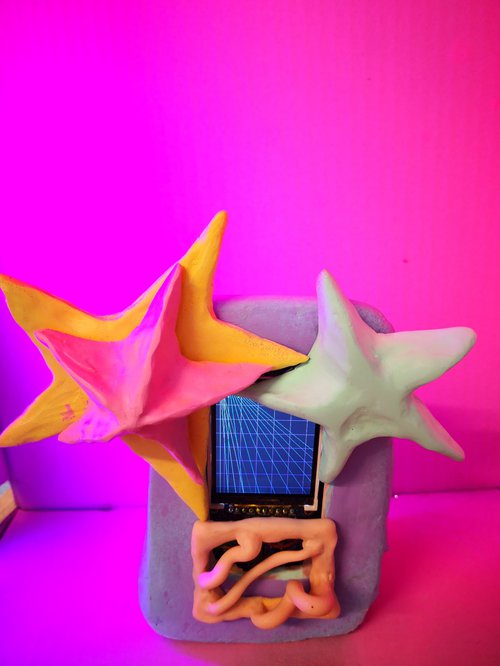 Seeing live results from the game displayed on the sculpture makes me feel more connected to the anonymous players playing the game during a time where most of us are communicating through digital means.

I made the sculpture out of polymer clay with an embedded circuit consisting of an Adafruit Feather Huzzah, a 2.8 inch ILI9341 LCD screen, a 500mAh LiPo battery, and an On/Off switch. I chose the Adafruit Feather Huzzah due to its ability to connect to wifi, its small size, selection of pins, and compatibility with Arduino. In addition to being connected to the internet, I wanted to make my sculpture portable and to be able to control when it is “on” or “off,” so I made sure to add a rechargeable battery and a switch as well.

Additionally, here is a recommended list of components that you will need to get started with this tutorial:

Set up the Adafruit Feather Huzzah

The Adafruit Feather Huzzah serves as the inner brain of your sculpture. Before you start building the rest of the circuit and the sculpture, you will need to set up your Feather board so that you can program it using the Arduino language.

In order to be able to program the Adafruit Feather Huzzah, you will need to install the Arduino IDE. Download the appropriate version of the IDE for your operating system.

Once you have installed the Arduino IDE, you will need to install libraries which will allow you to send your program to the Adafruit Feather Huzzah board, connect to the internet, and display visuals on the TFT LCD screen.

Install libraries for the board

Follow these instructions to set up your Adafruit Feather Huzzah and to program it using the Arduino language: https://learn.adafruit.com/adafruit-feather-huzzah-esp8266/using-arduino-ide

Install libraries for WiFi capability and programming the LCD screen

You will need to install several libraries in order to securely connect to the internet and to parse the data from the Airtable database. In the Arduino IDE go to Tools in the navigation bar, and in the drop down menu, select Manage Libraries. 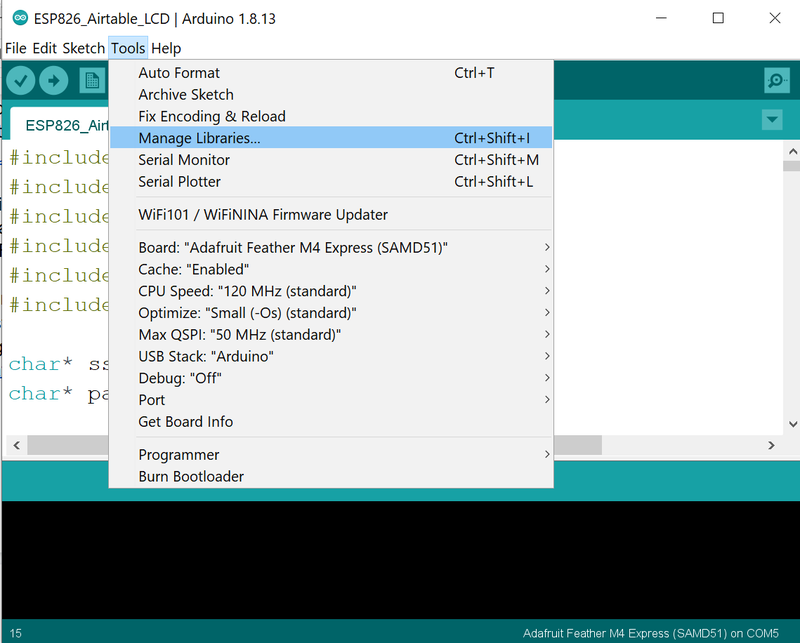 A window with a search bar will pop up. You will enter the names of the libraries that you would like to install in this search bar. The libraries I use are:

Type in the name of each library in the search bar. Select the latest version, and then press install. 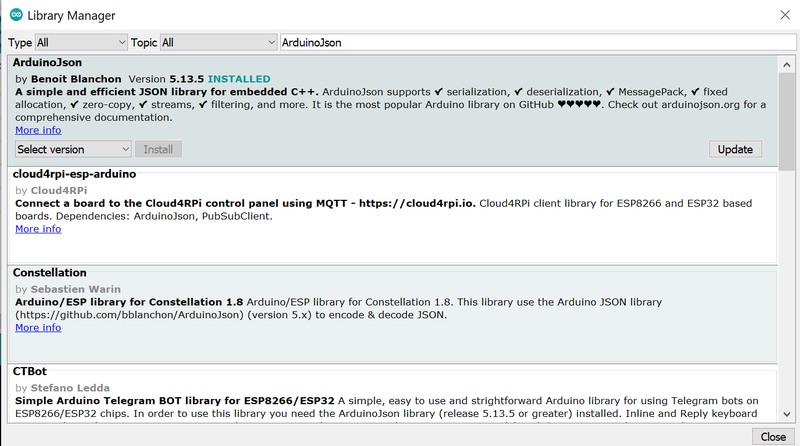 Select the latest version of the library and press Install.

Note: I use version 5 instead of 6, the latest version, for the ArduinoJson library. Using version 6 instead of 5 might cause some of the code to break.

Before soldering the circuit, it’s best to build it on a breadboard. This is how the screen looks when connected to the Adafruit Huzzah and an on and off switch on the breadboard. It is quite messy with a lot of connections. 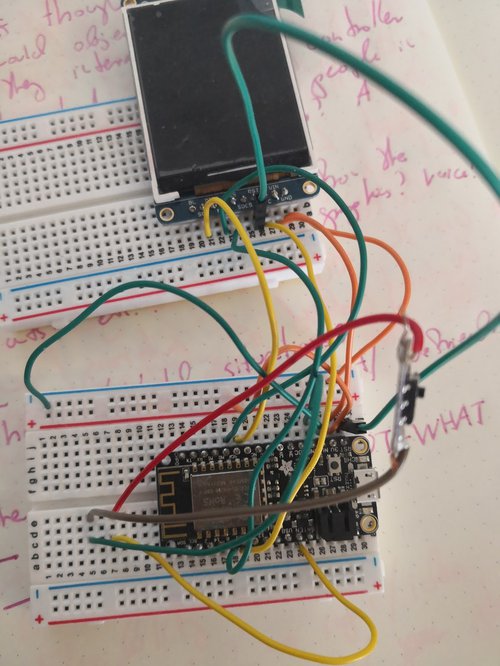 Here is a fritzing diagram which shows a cleaner depictions of the circuit: 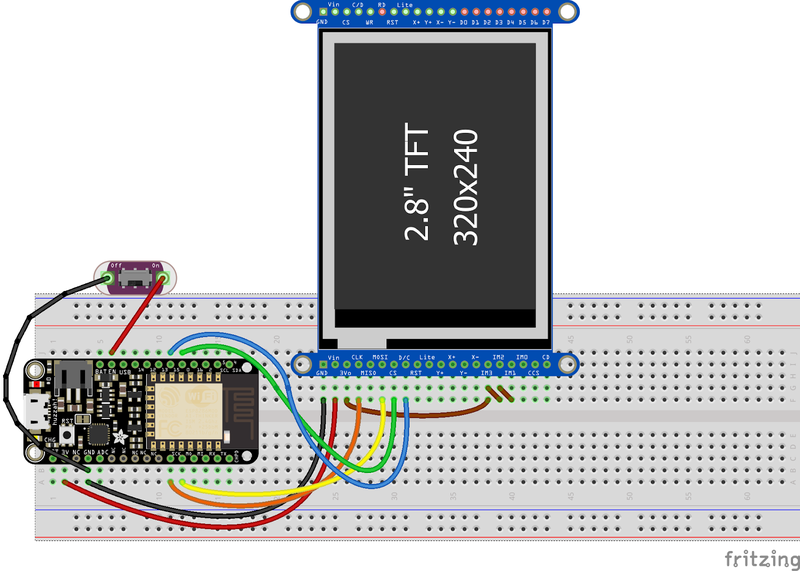 I modified this image based off of a fritzing diagram available from this Adafruit page to include the switch.

These are the pin connections for the Adafruit Feather Huzzah, TFT screen, and on/off switch:

Send the code to Arduino

I have included the entire Arduino code below with explanations on how it works. If you would like to access the Arduino file and upload it right away, you can access it here. I would recommend you take a look at the explanations below because you will need to make your own changes in order for the code to work.

In order to connect this board to the internet, you will need to include your WiFi SSID and the password.

Now let’s declare some instances of the WiFi client and the LCD screen. You will also declare some variables that will be used throughout the Arduino sketch.

The showResponses() function responds to the data from the Airtable database and displays it on the TFT LCD screen.

The following code connects to the host and will require you to use information from your own Airtable account. The URL string variable is the address of your own Airtable base. You can find it by going to the Airtable API (https://airtable.com/api) and clicking on the workspace which contains the database that you are using for this project. Then go to the “Retrieve a record” tab to the left. Your URL will appear in the “Example Request” on the right.

Next, you will need to authorize access to the database using your Bearer key. This key is the same as your Airtable API key. Add the following code underneath the char host[]=”api.airtable.com” line.

Once you have accessed the Airtable database, it’s time to parse the data and then display it on the TFT LCD screen. I decided to program some geometric graphics on the screen and make it display cryptic messages based on the retrieved values.

The next section of code will access the records available in the Airtable database and display the results on the screen. This bit of code is quite long, and you can access it in this gist link. It goes underneath the client.print(“”) line in the above section.

Next, add the following neon_grid() and diagonal_lines() functions to create patterns using the ILI9341 and GFX libraries for the TFT LCD screen.

The neon_grid() function creates a grid using a color that is defined in the parameters. The diagonal_lines() function draws a series of diagonal lines with a customizable starting position and spacing between the lines.

The loop() function runs continuously. It continuously runs the showResponses() function after a predetermined time interval in order to account for delays when attempting to reach the Airtable database.

Now that you have written the code, it is time to upload it to the Adafruit Feather Huzzah. In order to upload the code, press the arrow in the top left corner of the Arduino IDE.

I crafted the enclosure out of wire, masking tape, aluminum foil, and polymer clay. Here are some progress images of my crafting process:

I soldered the Adafruit board along with the components onto a perfboard before placing it into the sculpture. The below image shows the two halves of the sculpture with the lipo battery cemented to one half of the sculpture while the circuit on the perboard is glued onto the section with the opening for the screen. 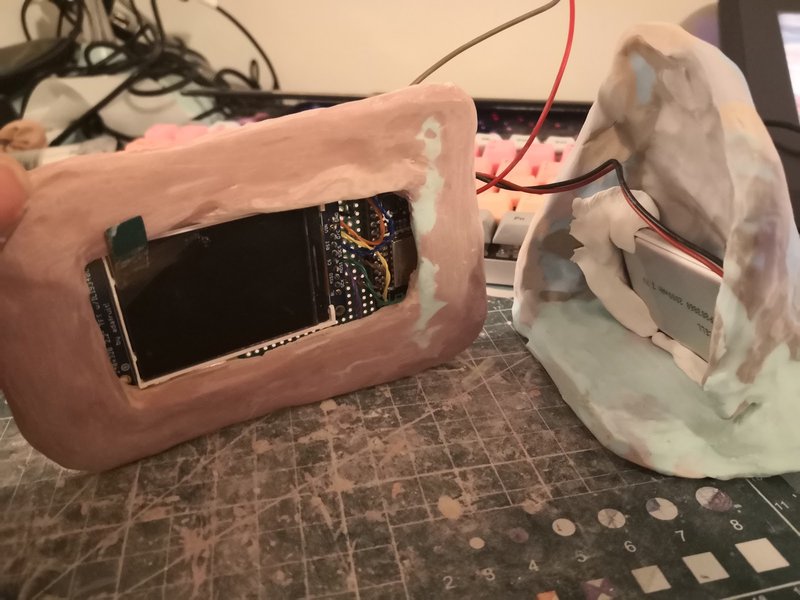 This is another view of the two halves of the sculpture. This view shows the epoxy cement connecting the upper corners of the screen to the clay sculpture. 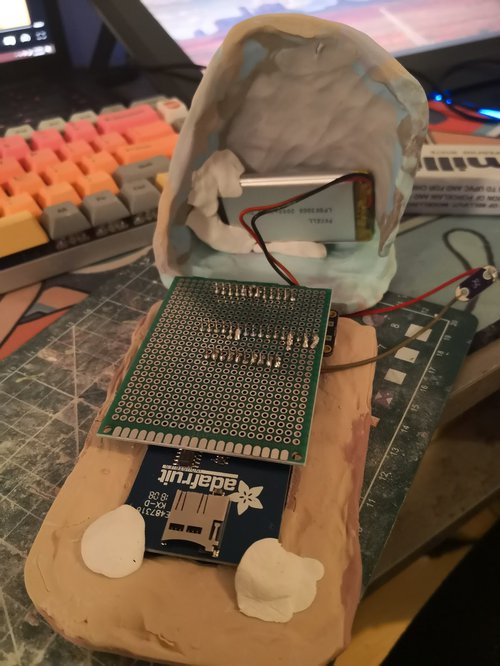 These are some clay ornaments which will be attached to sculpture once the circuit has been inserted and the two halves of the have been cemented together: 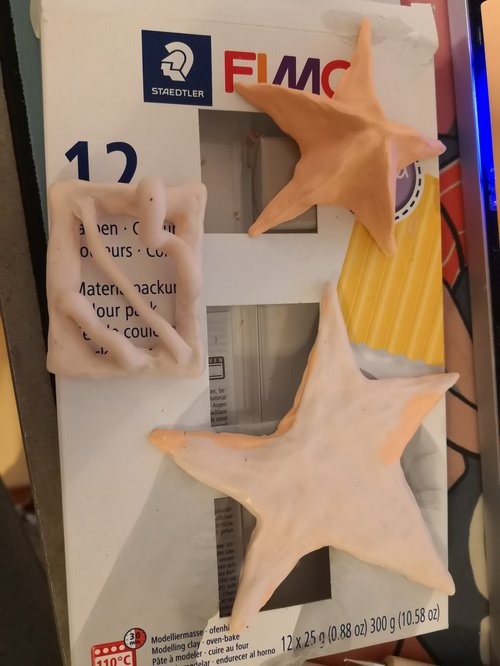 I wanted the aesthetics of my sculpture to match the retro feel of the graphics on the screen. I used pastel colors and bold shapes to match the feeling of toys from the nineties and early 2000’s. Oftentimes when audiences think of computers or technology, they think of smooth lines, symmetry, logic, and a lack of emotion. I wanted to subvert this notion by making an uneven, imperfect sculpture out of clay. 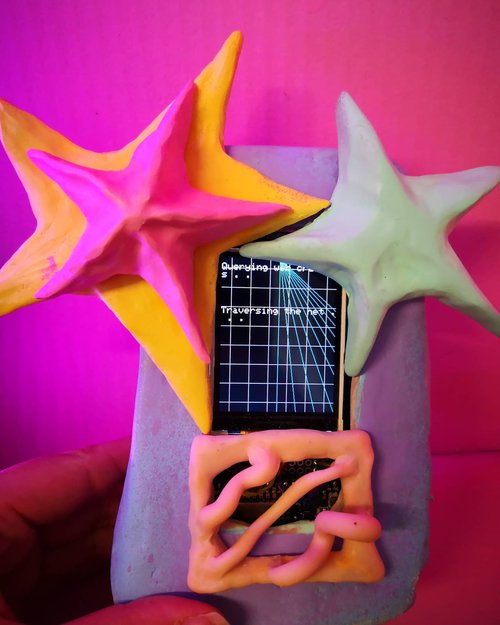 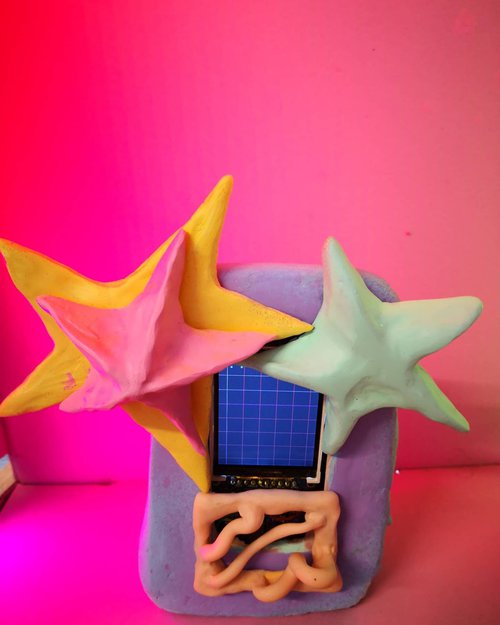 Thank you for following along with this tutorial! I hope you have a lot of fun making a sculpted physical display for your own text-based game. For more ideas on how to build with Twilio IoT, check out this blog post or the strange and wonderful Internet of Things videos on the TwilioDevs channel. You can also read an official overview of Twilio IoT here.

Julia Makivic is an artist who combines art and technology to create amazing experiences. Follow her on Twitter and Instagram for more fun projects, and check out the Camaraderie Park Facebook page for more updates on the game.

Learn how to build a text-based messaging game with Twilio Autopilot, Facebook Messenger, and Airtable.