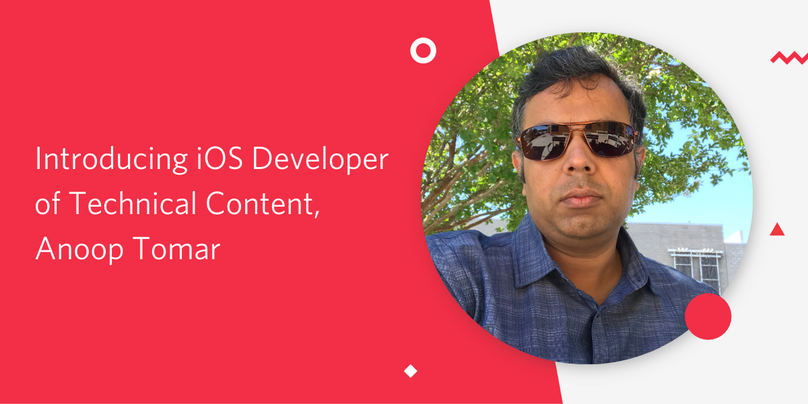 Hello everyone, my name is Anoop Tomar and I’m very excited to join the Developer Voices team. I currently live in the San Francisco Bay Area with my beautiful wife and daughter.

There is an interesting (I think 🤔) story behind how I got here and I would like to share, by taking you back in time.

My dad was an electronics engineer, so he introduced me to circuit boards and soldering irons when I was eight year old. I had the same number of LEDs, registers, and diodes as toy cars 😁. My curiosity drove me to open anything and everything that was powered by electricity, to see what kind of circuits those equipment were hiding.

Once, I got my hands on my dad’s solar powered calculator. I opened it up to see what’s inside, specifically how the small solar plates powered the LCD display. When I tried to close it, I found myself stuck since I couldn't remember where each key belonged. After several tries, I finally managed to close the calculator, not realizing that I switched the places for “C” and “AC” keys. Well my dad obviously found out 😳, but instead of getting mad at me for tinkering with his expensive calculator, he opened that calculator with me and showed me where everything belonged.

Fun fact: later that year when I got my own soldering iron, I used it to take out the solar panel from the calculator to light up a few LEDs.

Official start in the computer world

I started my tech journey with a computer language called BASIC during my high school years. Fast forward, I found myself sitting behind a computer at every opportunity I got, even if it meant falling behind in my classes 🙃.

Many years passed since my introduction to the tech world and I was working as a software engineer, learning new things and meeting new folks in the valley via meetups and hackathons. A few years back while attending one such meetup, I met an individual who was looking to build his career in the iOS app development space. We started talking and soon I found myself mentoring and introducing him to the wonderful world of iOS. A couple of years later, he went to work for Apple as an iOS engineer. This was an eye opening experience! Building new things was fun, but giving back to the community by sharing your knowledge was much more fulfilling.

Another YouTuber was born 😍

As I continued following this passion of teaching, I found a new home with YouTube to share my learnings. As a result, I also learned a ton from folks giving feedback about the do’s and don’t.

The opportunity to join Twilio came to me as a surprise. Initially, when the recruiter reached out, I declined, but when she insisted that this would be a perfect fit, I agreed to chat. When Marcus and I connected over the phone for the first time, was when I realized that sharing knowledge and doing what you love can be a full-time job as well.

What will I do here?

If you have been paying close attention while reading, you might have noticed a few hints as to my new role at Twilio. I will be supporting the iOS and Apple side of the community in this role. I will share useful posts about how to build Twilio-powered iOS apps and will be exploring the Apple app development world with you all.