What is RCS Messaging?

What is RCS Messaging?

Every day, billions of people and thousands of businesses connect via text messaging, a modern way to communicate that's actually been around for over 30 years. RCS (Rich Communications Services) is a next-generation SMS protocol being championed by the GSMA, Google & Android, Samsung, and many carriers and mobile phone manufacturers. And for businesses, the recently released RCS Business Messaging opens even more doors for customer engagement, marketing, and sales.

SMS: The Foundation of RCS

SMS has become an essential part of our lives. As of 2007, users were sending more text messages than phone calls, and now, with an SMS function available in all mobile devices, usage among all age groups has skyrocketed. Businesses, too, increasingly rely on SMS to support customers, ask for feedback, and reward loyalty with special offers. All told, there are over 15 million texts sent every minute. That’s 22 billion SMS messages a day!

Because texting is so simple, and the messages are short by design, consumers love using SMS to engage with businesses. They don't have to sit on hold, take time out of their day to visit a business in person, or wait long for an email to be responded to. They can fire off a quick message in between everything else they're doing, and be assured to get a succinct reply in no time. Businesses also love the channel; in addition to the consumer preference for texting, there’s also its ubiquity, global reach, immediacy, and unrivalled open rates. Sure, email open rates are great at 20-30%. But according to a Dynmark study, email can’t compete with the 98% open rate that SMS enjoys! In fact, 90% of texts are read within 3 seconds, and nearly a third (29%) are responded to!

SMS isn’t alone in its popularity. Apps like WhatsApp and Facebook Messenger, each with over 1.2 billion users, compete in a crowded market with iMessage, WeChat, Slack, Skype, Viber, Android Messages, and many others. These free and low-cost messenger apps provide an experience that builds on SMS, offering group chat, image sharing, video, audio, and a seemingly endless range of emoticons. Once you’ve used one of these feature-rich apps, it’s easy to see why they’ve taken off.

The popularity of chat apps is perfect for businesses looking to engage with consumers in increasingly ’sticky’ ways. But the sheer number of different apps has fragmented the landscape. To support users across such a crowded messaging ecosystem, developers have to wrestle with variations in APIs, capabilities, and tooling. Keeping up has proven to be difficult, time-consuming, and — most important — costly.

RCS: The Next Generation of Text Messaging

Enter RCS, an upgrade to SMS through a universal standard known as Rich Communications Services. RCS, a platform that’s significantly more interactive and capable than today’s SMS, has been supported and promoted by the GSMA since 2008.

In short, RCS makes text messaging as engaging as WeChat, WhatsApp, and other messaging apps while providing the reach of SMS & MMS. Rich features like high-res photo and video sharing, mapping directions, location sharing, typing indicators, the ability to add and remove members to group chats, and so much more, are delivered to a device’s default messaging app irrespective of the network the user is on.

As you might imagine, A2P messaging can be a little more complicated than messaging in a P2P context. Previously, to support users across multiple messaging channels such as SMS or Facebook Messenger, developers found themselves grappling with variations in APIs, app capabilities, and display restrictions. RCS messaging posed similar challenges. While allowing businesses to move beyond basic texting, RCS messaging remained costly and difficult to develop and deliver due to a lack of standardization. But by coming together under the umbrella of the GSMA's Universal Profile for RCS, carriers can cost-effectively provide RCS messaging to businesses and help them engage more users than ever.

RCS business messaging (the term used by the mobile industry for rich business-to-consumer messages) will help organizations of all sizes benefit from creating truly branded conversations across networks and sent to any device. This can include delivery of things like digital concert tickets and boarding passes, hi-def video and PDFs, product carousels that consumers can browse and buy from, and suggested replies and actions for more straightforward A2P engagement. In addition, RCS Business Messaging helps alleviate consumer ‘fear-of-fraud” by indicating that the message delivered is from a verified businesses sender. It also lets marketers know how messages are performing with real-time data on when messages are delivered and read, and whether recipients have tapped on embedded app links.

RCS Business Messaging lets businesses move beyond texting to send beautiful images and customized offers. This was a perfect fit for 1-800-Flowers.com, one of the first brands to integrate RCS Business Messaging into their digital customer communications. Having used Twilio Programmable SMS to ensure that recipients are always aware of what’s going on with their orders, 1-800-Flowers.com found it easy to quickly extend this experience to support RCS using the same API. Now the company is bringing richer experiences, built with Twilio, to supported devices, and is allowing customers to make, modify, and track orders, and adjust the delivery window, all without leaving the messaging app. Best of all, customers on the receiving end of the RCS messaging never have to dial the phone or sit on hold to speak with a CS agent. 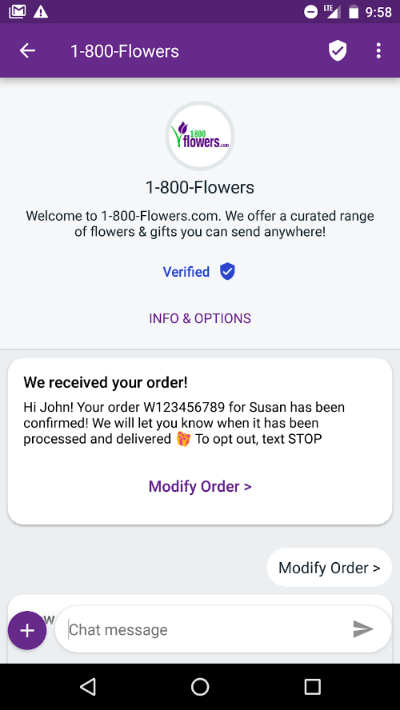 Google, through its Early Access Program, is helping brands and developers adopt RCS business messaging more easily. Currently, RCS is supported by over 50 carrier networks and is serving nearly 160 million users globally on handsets developed by over 20 international manufacturers. The GSMA estimates that there will be 350 million RCS users by the end of 2018, and a billion in 2019.

Moving Forward: What’s Next For RCS

Here at Twilio, we're already starting to see some innovative and engaging ways that business marketers are thinking about using RCS. And since Twilio RCS is just one part of an omni-channel API, we’re helping these brands “future proof” their development efforts by making it easy to expand reach to the channels customers are using most. Today it might be Facebook Messenger, tomorrow it might be Slack, or something else. And like with any new technology, we’re excited about enhancements to the platform that will continue the momentum.

At Twilio, we’re excited be part of Google’s Early Access Program, to support RCS Business Messaging, and to enable enterprise developers to build more engaging, rich messaging experiences. With Twilio, developers can use one API to deliver the richest experiences for any device, while reaching every user. And with our Rich Messaging Extensions, your developers can extend the Programmable SMS API with additional optional parameters for including rich content and interactive experiences.

RCS Business Messaging and Rich Messaging Extensions to the Programmable SMS API are now in Developer Preview. Request early access or talk to us to learn more.

Knowing who, what, how, and when to message consumers in the United States can be challenging. In this whitepaper, we’ve compiled SMS best practices to help you determine your compliance strategy.

How to Use Twilio for Marketing

Using Twilio, you can build marketing campaigns that are infinitely flexible and instantly responsive, allowing you to create the ideal customer experience for your users.

Email to SMS: Strategies and Tactics for Optimal Performance

Explore best practices for the use of email and text messaging in your marketing strategy, and discover why omnichannel cloud communication is the ultimate path to marketing success.