The four behavioral nudge case studies below speak to how little changes in communication can make a huge difference in healthcare outcomes across communities.

The application of behavioral economics and behavioral phenotyping lets healthcare organizations drive more effective care and improve acceptance and adherence to a range of health and wellness service offerings.

To that end, the Penn Medicine Nudge Unit is leading an effort as the world's first behavioral design team embedded within the operations of the health system. The unit takes a more systemic approach to see how they can help guide, remind, or motivate both clinicians and patients to change their behaviors in an increasingly more digital world.

“The way we frame information and the way choices are outlined can have a huge impact on patient behavior, and we need to really focus more strategic attention on how we design those choices to help nudge them in the right direction,” Penn Medicine Nudge Unit Director Mitesh Patel said.

Behavioral nudges are subtle changes to design of choice architecture. They could be as simple as the order in which options are laid out, the default choice a user can make, or even the way language is framed in making that choice. Nudges don't force decisions. They're really meant to guide users in the right direction, but still give them freedom of choice.

“We’re using nudges to improve transparency around needed costs of tests or treatments or to show individuals when they're outliers compared to their peers. The goal is really to help frame the choice environment within healthcare,” Patel said.

Through a series of behavioral nudge trials, Penn Medicine Nudge Unit successfully leveraged Twilio's communications technology Twilio to improve patient outcomes by enabling customized messages, and scaling communications via SMS and voice. The four case studies below showcase some pretty astounding results and speak to how little changes can make a huge difference in healthcare outcomes across communities.

The study: Penn Medicine Nudge Unit partnered with the Behavior Change for Good team and the Way to Health platform to use messaging to nudge roughly one million people for flu vaccination from September to December 2020.

The method: Rather than testing just one or two types of nudges, the unit engaged a group of leading behavioral scientists from around the world to test over 20 different types of nudges. The nudges were received by roughly one million individuals enrolled in the program via two major northeastern health systems and also in Walmart pharmacies across the United States. Using these different approaches,  the scientists tested which nudge worked best with the idea that their research could inform the upcoming COVID-19 vaccination efforts.

People were sent either one or two reminders in the preceding days up to their doctor's appointment, or one message if received from a Walmart pharmacy. The messages varied broadly in approach from telling a patient a joke about the flu to having them dedicate the flu shot to a family member or friend. In total, there were 22 different interventions that were tested head-to-head against the control group.

The findings: “It was actually a really simple intervention that changed behavior the most. And that was switching just one word. We changed the message from, your vaccine is available for you, to your vaccine is reserved or your vaccine is waiting for you. What these two words or phrases have in common is it makes you feel like the vaccine is yours and that this is your opportunity to get your shot,” Patel said.

Just by changing one word to either reserved or waiting led to an 11 percent increase in vaccination across the nearly one million patients nationwide in the study, showing how powerful language can be—and how a really simple change can be scaled broadly and quickly for vaccination efforts via SMS.

The study: During the height of COVID-19, Penn Medicine Nudge Unit developed the COVID Watch program for Penn Medicine clinicians to monitor patients with mild cases of COVID-19 from home, to help from overwhelming the hospital’s emergency rooms.

The method: Using a text-based approach, a physician would enroll a patient based upon their COVID-19 results or general health standing. From there, the system would text the patient twice a day for a two-week period to check in on any breathing issues.

In the event the patient began having trouble breathing or if they wanted to speak with their clinician, they could text a single keyword within the conversation. From there, the information was escalated up to a nurse who would then give the patient a call and decide whether they should come in-person.

The findings: “Over a six month period, we were able to save about 436 staff hours, which meant that we could essentially run a much bigger operation with a smaller number of people while providing the same level of care,” Corporate Director of the Center for Healthcare Innovation at Penn Medicine Mohan Balachandran said.

By using consistent automated messaging, Penn Medicine was also able to save about $2.3 million over the first 100 days of the program. This program shows how this type of communication could let healthcare systems do a significant amount of work but in a cost effective, efficient way.

Use case #3: Community outreach with Way to Health platform

The study: Penn Medicine Nudge Unit partnered with Mercy Health as well as local community and faith leaders to communicate through text and voice about ongoing community vaccination clinics in underserved minority geographies throughout the Philadelphia area.

The method: Information about these clinics was passed through churches and community centers which were given a phone number that individuals in the community could either text or call to be enrolled for vaccination. Regardless of choice of communication channel, the system would walk a user through the process of setting up an appointment, gathering the key patient information needed.

Once all the data was captured on the platform, the information was printed on a form that was kept at the clinic. The patient would pick an appointment slot and all they had to do was show up. The process has been simple—and successful.

The findings: “Each of the clinics outperformed the goals that were set. At the first three, about 3,000 vaccinations were completed. The goal was 2,750. The most fascinating thing about this was that the aggregate net promoter score across all three clinics was 96, which is a slightly astonishing number especially given healthcare generally ranks pretty low in this category,” Balachandran said.

Thanks to the dual SMS and phone calls system, the team accredits the high NPS score to patients having almost zero wait times, given nearly all of the patient information needed was filled out prior to a patient arriving. They also accredit overall success rate to partnering with communities on a local level to help individuals feel more comfortable with the vaccination process, and plan to continue the program and expand its frequency.

Use case #4: Keeping at-risk moms safe during pregnancy with Way to Health platform

The study: Using a combination of a remote blood pressure monitoring device and SMS communication, clinicians created a simple tracking program for new moms to send in their blood pressure information without having to leave home.

The method: The American College of Gynecology guidelines require new mothers to come into their doctor’s office at least twice during the two weeks after giving birth to make sure their blood pressure is normal. Given how busy new moms are, however, the adherence to this guideline was nearly zero.

To help new moms manage their health more effectively, patients were given a simple take-home blood pressure cuff and reminded via SMS to take their blood pressure twice a day and text back results.

The findings: “The guideline adherence number before this program was essentially zero and afterwards is now about 80 percent. Further, before the program, the readmission rate was about five percent or so and now has dropped to around one percent,” Balachandran said.

Nudging patients into a healthier tomorrow

As we move into a new phase of this pandemic where vaccines are available, using this kind of communication technology to make tiny changes to the way health systems can help guide, remind, or motivate both clinicians and patients to change their behaviors, will be particularly important in defeating COVID-19.

Learn more about how simple behavioral nudges can revolutionize your healthcare communication, dissemination, and logistics efforts and read the full whitepaper.

Susan Lucas Collins is the Global Head of Healthcare Services at Twilio. She has extensive experience managing through shifting regulatory and reimbursement models, has provided trusted counsel to executives seeking insight in rapidly evolving markets, and is passionate about developing solutions that create a measurable difference in the world. Prior to Twilio, she led Salesforce’s healthcare and life sciences organization. 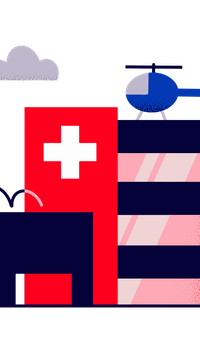 Perhaps the COVID-19 pandemic represents a sea change—our lightbulb moment. Could the silver lining be that we are forced to dramatically transform in a meaningful way?

Here’s how two health systems and a community-based collaborative used communication nudge technology to increase the vaccination rate in a Philadelphia community—and how the same techniques could be used in similar communities around the United States.

Understanding health disparities is a crucial starting point, but what comes next? Healthcare organizations need the right engagement to guide patients toward better outcomes based on their own unique challenges and goals.