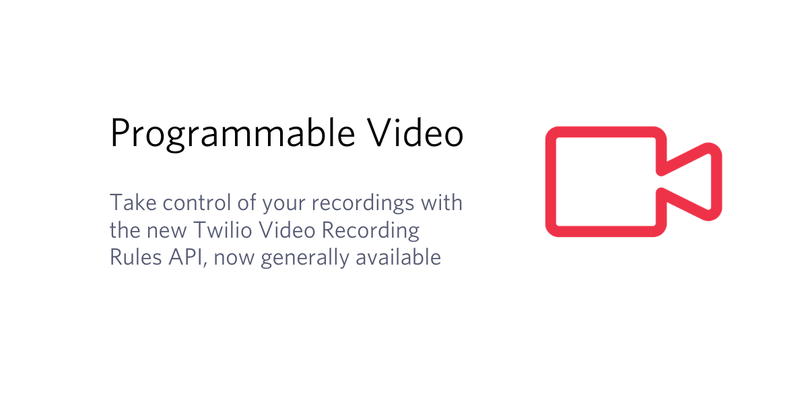 Choose your own recording adventure! Decide when and who you want to record from a Twilio Video Room.

Back in March of 2020, we introduced enhanced recording features which include the ability to compose the media files of a Room recording into a high-quality, custom layout that matches a specific use case, public key encryption, and external storage. Since then, we have seen how a large number of companies have benefited from these new features including use cases such as capturing calls with clients, analyzing and improving negotiation sessions, exams proctoring, performing historical reviews of doctor-patient sessions, and more.

But, what happens when part of the conversation cannot or must not be recorded? What about when a customer shares some confidential data, or if a customer just wants to record the audio of a participant, or if they want to start the recording in the middle of the session, or if they are only interested in the recording of the candidate during an interview?

Up until now, when using Twilio Video Recordings, developers had to initiate the recording prior to the start of the room. At Twilio, we are always listening to our customers and looking for ways to improve. Based on your feedback, we have released a new feature, Video Recording Rules API.

Why we built this feature

Before this release, If a developer wanted to customize their recordings, they had two options. In the best-case scenario, the problem could be solved by adding post-production processes to the recording, which is not scalable due to required additional investments in third-party software and developer time. In the worst-case scenario you could be storing sensitive information that could jeopardize your security reputation as a company.

These are some situations where, as a developer, you do not want to record certain parts of your video session. A few of those include:

Twilio Video Recording Rules API is a feature that allows developers to select and record individual tracks on-demand while a room is already in progress. This means that during a video room session, developers can determine:

This enables companies to better control their recordings and navigate local regulations. As Gene Podolyak, Co-Founder of Remeet.com put it, "New recording control API was super easy to integrate and it improved our compliance with GDPR.”

It also provides organizations with flexibility around who they record, which in turn helps manage costs. “The ability to record an individual user is a vital function for FitSwarm, improving efficiency and reducing cost.” said Tony Beim, Founder of Fitswarm, a fitness and well-being company.

How does this new feature work?

A set of rules applied to start and/or stop recording tracks based on the kind of track and the identity of the track publisher.

Here’s a couple examples of how you can benefit from this new feature:

Scenario A: A contract is being negotiated through a Video Session. You want to record all the negotiation apart from the signing of the contracts. At that moment, your customer wants to stop the recording.

After the signing has happened, your customer wants to resume the recording.

Scenario B: A session is being hosted by Alice and John but only Alice is officially presenting so John’s recordings are not needed. We don’t want to record attendants' videos either because they are working from home, but we do want to record their audio tracks in order to capture the discussion.

Ander Telleria is a Staff Product Manager at Twilio with over a decade of experience envisioning and delivering worldwide software products. When he’s not designing new business models or products in his lab, he will probably be traveling and getting to know new cultures around the globe.