It was the first weekend in November when hundreds of hackers descended upon Microsoft NERD in Cambridge, still recovering from their Halloween sugar highs. Their goal: to create the next generation of music tech at Music Hack Day Boston.

The event began as most hackathons do, with API demos from the sponsors and project pitches from the hackers. But once the brilliant MC Paul Lamere shot his figurative starter pistol, things descended quickly into the untraditional...

In one corner there was a hacker-musician rocking out on his guitar.

On the opposite side of the complex was a hacker wrapped in wires, surrounded by power tools, doing some hardcore hardware hacking.

And in the de-facto operating room a hacker named CJ was quite literally creating music by brain power. 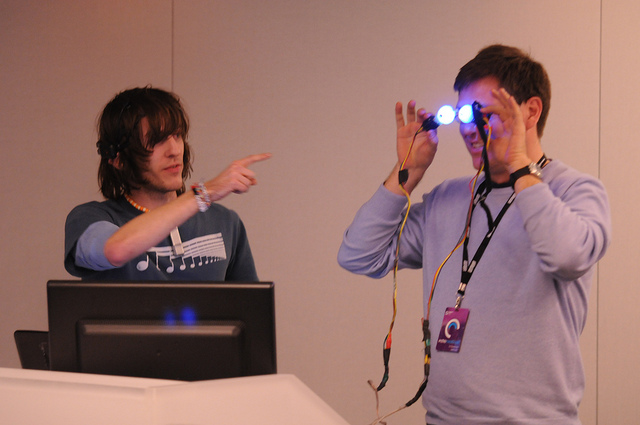 After a full day of hacking, we left Microsoft NERD on a school bus destined for the Echo Nest offices, where we were met by DJ Ali Shaheed Muhammad of A Tribe Called Quest and a rockin’ party on one floor and diligently working hackers on the next. While most hackers opted to get at least an hour of sleep, many more decided to take advantage of the extra Daylight Savings hour and hack through a solid 13-hour night. Bright and early the hackers migrated back to the beautiful Microsoft NERD campus, preparing for the crunch before demo time.

When the demos finally began, there were a staggering 56 completed hacks up on the Hackathon Wiki, ranging from social playlists to laser-generated MIDI streams. There were a solid number of Twilio hackers in attendance and they presented the following awesome demos:

muTxt (pronounced mew text), lets you search for artist data via TXT message. UK Twilio Hacker Martyn Davies used Twilio, The Echo Nest, MusicBrainz, and Songkick to create a complex search engine that lets you search for recent gigs, similar artists, when their birthday is (so you can get them a gift, of course) and even how much of a scenester an artist is. This sweet and well-polished hack won him the prize for best Twilio integration. Congratulations, Martyn, we look forward to seeing you rep Twilio back in the UK!

This hack was created by Janine Yoong using the EchoNest, Rdio, MusiXMatch, and Twilio APIs. It lets users guess the names and artists of songs picked from the ubiquitous jeopardy categories, pulling in data from a variety of APIs to generate questions on the fly. Janine added Twilio Client support to allow players to call a friend for help if they can’t guess the answer alone – lucky for her Paul Lamere was standing by to help her answer a trivia question in her demo!

Ctrl+Freak was created by Kevin Dela Rosa and Nitin Agarwal using the EchoNest, YouTube, and Twilio APIs. It allows venues to put up a crowd-sourced video stream and have users TXT in to vote for the next song in the playlist which will automatically be queued up from YouTube. It is based on the classic MTV show Control Freak, which let viewers call in and vote for the next music video to play on live TV.

I wrote this little hack Twizam to allow users to call in, record a snippet of a song, and receive its name and artist back via SMS. It uses the Echo Print API to identify the snippets and the Echo Nest API to get detailed data about the songs.

This next hack didn’t actually use Twilio (though its creator also made a Twilio hack this weekend), but it was amazing to watch and have explained to me. CJ used an Emotiv EPOC EEG, Ableton Live, and PureData to generate music and light patterns based on his mediative and emotional state. In his own words: “Although binaural beats are mainly used in neuroscience, I think it would be cool to compose music using this psychoacoustic phenomenon and make complex the rhythms which challenge your auditory cortex to decipher the pattern of the combined signals.” Try to grok that while you watch the mind-boggling video of his demo below.

Thanks to the Echo Nest and Microsoft for hosting yet another amazing Music Hack Day Boston. And a huge thanks to Thomas Bonte for taking some great photos of the event! If you’re interested in watching the demos I have videos of most of them up on YouTube, though unfortunately my camera died part-way through so I apologize if I missed yours (next time I’ll bring an extra battery!)