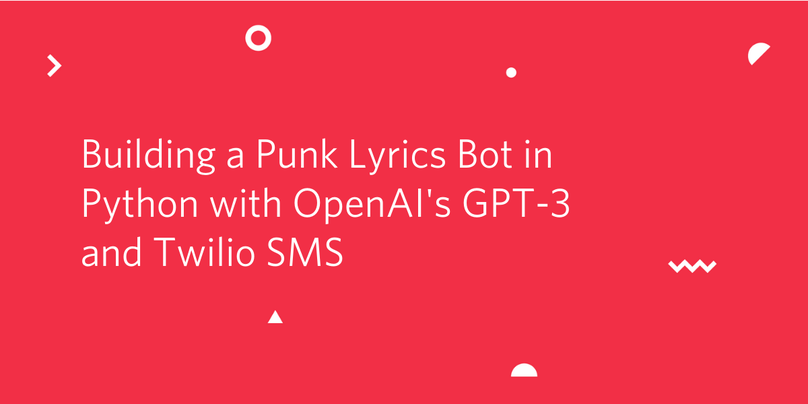 In the midst of pandemic-related lockdowns, many people around the world miss seeing their favorite bands. What if you could bring the anti-authoritarian, do-it-yourself ethos of punk rock home in the form of new song lyrics created by your Python code?

OpenAI's new GPT-3 (Generative Pre-trained Transformer 3) model was trained on a massive corpus of text making it incredibly powerful. This can be used to generate song lyrics with surprisingly little input text given to it as a prompt.

Let's walk through how to create a text-message powered bot to write Punk songs in Python using Twilio Programmable Messaging and OpenAI's API for GPT-3.

GPT-3 (Generative Pre-trained Transformer 3) is a highly advanced language model trained on a giant amount of text. In spite of its internal complexity, it is surprisingly simple to operate: you feed it some text, and the model generates some more, following a similar style and structure.

We can see how versatile it is by giving it a tiny amount of input. Simply providing a format like you'd see on a lyrics website with an artist name can potentially generate lyrics in the style of that artist. For example, here's what it generates with the input "Artist: Bad Brains\n\nLyrics:\n": 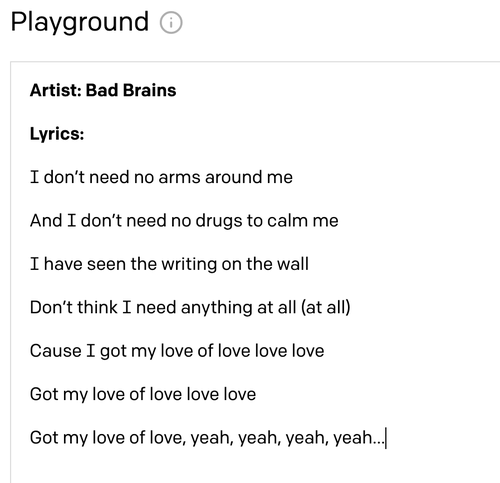 Bad Brains is one of the classic early hardcore punk bands, which is my favorite iteration of the genre. They did sing a lot about having a positive mental attitude, so these lyrics seem to fit that. Let's try another classic band, Black Flag:

Yeah that kind of sounds like something Henry Rollins would write.

This code uses Bad Brains again, but you can try it with any of your favorite bands. For the sake of variety I am going to use D.R.I., the fastest band around at the time, for this example. You should see something like this printed to your terminal: 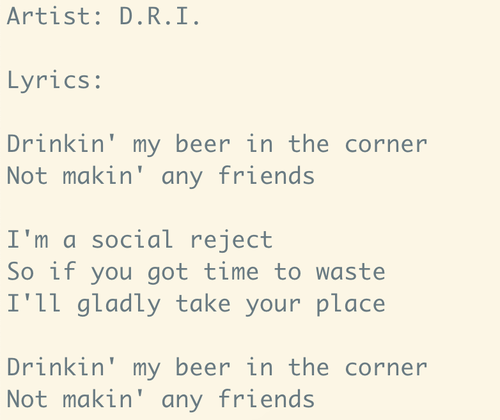 Let's change the code to begin the prompt with a randomly selected band:

Run this code a few times to see what happens. You might have to try it a few times before getting a good one.

With this taken care of, we can move onto actually building the Flask app to respond to text messages with some AI-generated punk songs!

So you have a Twilio number and are able to have the OpenAPI generate songs.

Before moving on, open a new terminal tab or window and install the Twilio and Flask Python libraries with the following command:

A few changes were made to the OpenAI API code. First, we are having it generate only 128 tokens, because we are using the davinci engine, which is the most advanced model. This can potentially take a lot of time to generate text, so keeping the number of tokens small will make sure the HTTP response to Twilio doesn't timeout.

Because we have ngrok running on port 5000, the default port for Flask, you can now text it and receive some hilarious or questionably sensical punk lyrics. Sometimes you get anti-war anthems: 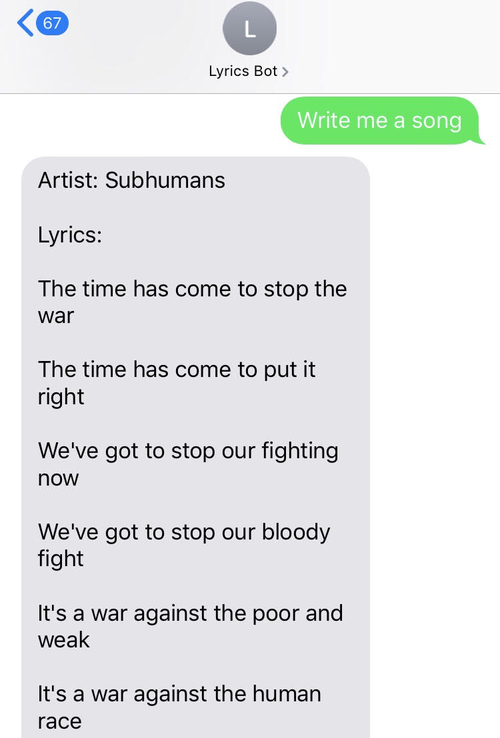 And sometimes you get meme-worthy, plagiarized gems: 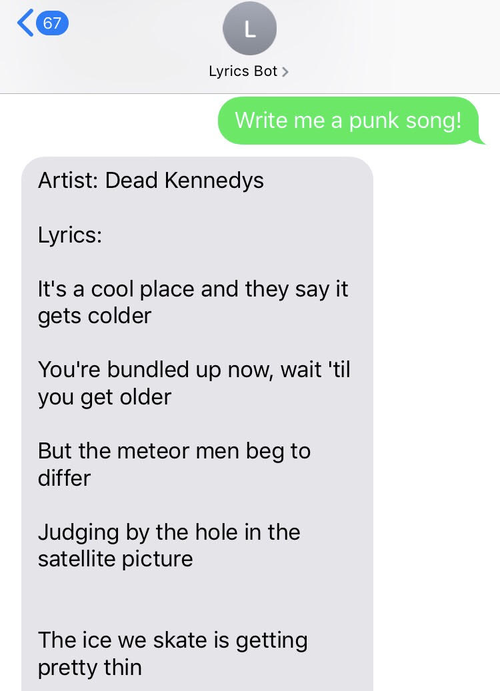 I'm pretty sure the Dead Kennedys didn't write that one!

Hopefully you've had fun generating new Punk songs with code. You can do this with any form of music by just replacing the bands in the Flask app with your favorite artists. My good friend Brodan wrote a similar post about generating metal lyrics, which inspired me to write this one.

In terms of technical changes you can also experiment with generating more tokens, and making up for the added time that takes by using Redis Queue to send a text message asynchronously when generation is finished, rather than risking a timeout by responding to Twilio's HTTP request right away with TwiML.

If you want to do more with Twilio and GPT-3, check out this tutorial on how to generate Dragon Ball fan fiction.

Feel free to reach out if you have any questions or comments or just want to show off any songs you generate.