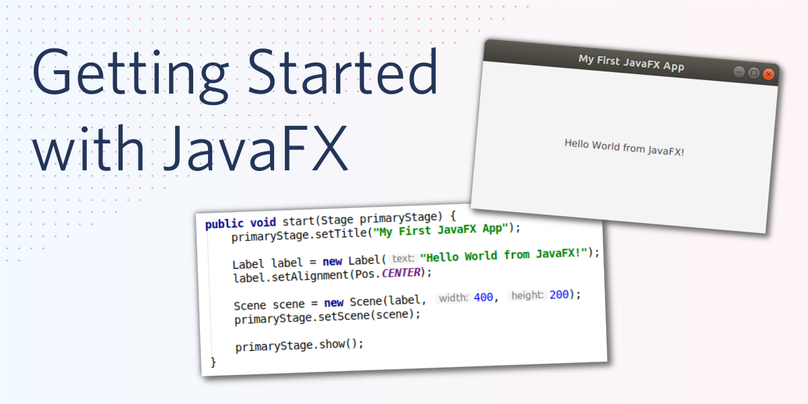 JavaFX is a Java toolkit for making GUI applications which run on Windows, MacOS or Linux and mobile. It is the successor to the old Swing and the older AWT toolkits.

Since the release of Java 11 in 2018 JavaFX has been part of the OpenJDK project, so it is open-source and is developed by many people from many different companies. If you are interested in creating a desktop application today then I would recommend starting with JavaFX and not using Swing or AWT, but it can be hard to know how to get started.

This post will walk you through creating a JavaFX desktop application from scratch - the application will use JavaFX’s controls module to draw a label with some text, then we’ll move on to creating an interactive app that can send SMS messages.

What do I need in order to make a JavaFX Application?

The latest versions of JavaFX need Java 11 or later, and we will be using Maven for this tutorial. However, JavaFX does work fine with any build tool (there are examples in the JavaFX docs).

We will create a new project by hand. Normally we could use a Maven archetype, but for this project we’ll be building it up step by step and only adding things when necessary so we’ll start in an empty directory.

Create a file called pom.xml - this is Maven’s Project Object Model, which describes the build configuration and dependencies.  All we need in this file for now is:

You can choose your own values for <groupId> and <artifactId> following the Maven naming guide if you’re not sure what to use.

After you make those empty directories you can import the project in your IDE.

As mentioned above, JavaFX needs Java 11 so we need to tell Maven to use that.  We’ll also set a property that defines how the source files are encoded to avoid cross-platform encoding issues.  Add this xml before the closing </project> tag in pom.xml:

While we have the pom.xml file open we can add a dependency on javafx-controls.  Add this into your pom.xml after the <build> section:

This is all we need to do in the pom.xml file for now - you can check that it matches the version in my project on GitHub.

The Java Platform Module System was added in Java 9, and was a big change to the internal structure of the Java core libraries. It allows developers to better modularize their libraries and applications by specifying groups of packages that can be considered as a “public API”. It won’t take much for us to use modules in this project.  Inside src/main/java create a file called module-info.java with the following contents:

This file declares that we require the javafx.controls module, and that our javafx.helloworld module will export classes from the package com.example.javafx - your IDE might show an error as that package doesn’t exist at the moment, so create it now by creating a new class called Hello in the com.example.javafx package.  The code in Hello.java can look like this for now:

As long as there is a class in that package then our module-info.java is valid.  The directory structure should now be like this:

If you want to double-check your project at this point, compare it with mine on GitHub.

Now the Maven and Java Module configurations are done, we can close everything else and concentrate on our Java code in Hello.java.

The Hello class will be a JavaFX Application, so it needs to extend javafx.application.Application which is an abstract class containing a method called start. We need to implement the start method in our class, and we can also add a main method to Hello to make it easy to run:

Our “Hello World” JavaFX application has a Label with some text, added to a Scene, and the Scene is added to the Stage that is passed into the start method. The components are nested like this:

Change the start method to create those components and add them to the `Stage`:

You can again check that your project matches mine on GitHub at this point. Then run your `main` method either through your IDE or from the command line with: 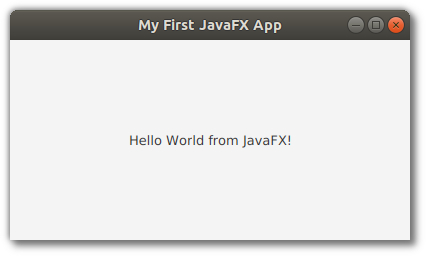 It’s time to pat yourself on the back, have a cup of tea ☕  and quickly recap what we have seen so far:

“Hello World” is nice, but how about making our application do something a little more interactive? For this final step I’ll walk you through building up an SMS sender using Twilio’s SMS API. 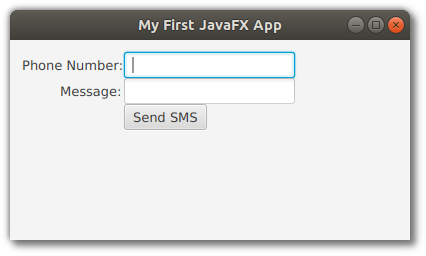 As you can see, we will need a few more controls in our Scene, and the way to add multiple components is with a Pane. There are many kinds of pane, depending on the layout you want. We’ll be using a GridPane, so the components will be nested like this: 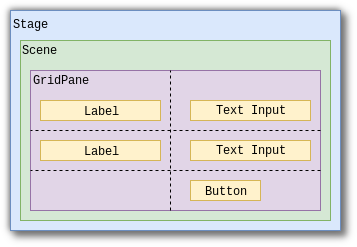 To make this happen, change the code in your start method to this:

Now you can run the application again, and you’ll see all the components, but nothing happens when you click the button.  Let’s fix that.

After the sendButton is defined on line 27, add the following code:

Again, you can check that your code matches mine on GitHub at this point. Run the application and see that “Clicked” is printed when you click the button.

Again, congratulations! You’ve built an interactive JavaFX application and you’re only a step away from finishing the SMS sender. All we need to do now is put the right code in place for sending the message to your phone.

For this you’ll need to add the Twilio Java Helper to your pom.xml, in the <dependencies> section:

And add requires twilio to your module-info.java.

Put this code at the top of your main method:

Again, the code at this point can be found on my GitHub. I ran into this bug running this from within IntelliJ but it’s fine to run from the command line as before:

If you get the error that Username can not be null then double-check that your environment variables are set correctly. When you have done that, then...

One more rousing round of congratulations for you - you have created an SMS sender using JavaFX and Twilio!

Now you know how to create the base of a JavaFX application, there are lots of directions you could take it:

Whatever you build, I’d love to hear about it. Let me know in the comments, by email mgilliard@twilio.com or on twitter @MaximumGilliard.