Photobooths are cool, but what’s really cool is powering that photobooth with a rotary phone and an arduino, with a Twilio hack. And it looks pretty hip too. Rotobooth took third place out of over 50 hacks at PhotoHack Day 2 in New York and truly captured the classic photo-inspired theme of the event.

Rotobooth is controlled by a rotary phone (super hacked!) connected to an arduino and a Mac mini that collects images on a Flickr account. Then it sends you a link to your photos via SMS. We had the chance to chat with Chris Bell, Liangjie Xia, and Mike Kelberman after the event to talk about their inspiration for Rotobooth and what’s next for the team.

Twilio: How did you get involved with PhotoHack?
Mike Kelberman: Liangjie stays up to date on the hackathon scene. He gave Chris and myself the heads up on Photo Hack Day 2. It was with Liangjie that we attended our first hack day, Game Hack Day at General Assembly last summer. With some other friends from ITP, we made Hadokam. It’s a Street Fighter IV hack that puts your face on the 3D character. I think we all wanted an excuse to play more Street Fighter and had tons of fun making it. The first prize was a nice perk to a weekend of hard work and intense silliness.

What was your inspiration for Rotobooth?
MK: The Rotobooth started as an attempt for turning a public payphone into a photo booth. Likely to be stolen or removed by the phone company, it made more sense to build a phone booth. Building my own booth gave me the freedom to use any phone. I chose a rotary phone. That’s when Rotobooth was born.

To use the booth, you pick up the phone and dial your own 10-digit number. A series of four photos is taken and uploaded to Flickr. The photo links are then texted to your phone. You can use the booth without giving your number. Just dialing ‘0’ will take one photo. It can then be retrieved on Rotobooth.com.

What technologies are you using to build/support it?
MK: We are using a hacked rotary phone as an input device. An Arduino identifies the numbers dialed and controls the digital camera. Once the Mac Mini receives the photos, they are resized, watermarked and uploaded to Flickr. The photo links are sent via text message using Twilio.

How does it use Twilio and how did you get started with Twilio?
MK: Rotobooth uses Twilio to send its users photo links. Liangjie and Chris work together and had already experimented with the Twilio API. 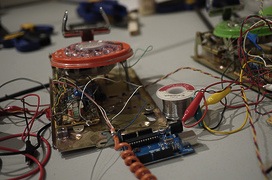 How was the experience of integrating Twilio with your chosen tools and technologies?
MK: I should preface this answer with the fact that we’ve done some phone hacking
before. Liangjie and I took a class together called Redial, where we played around with
Asterisk, an open-source software version of a telephone routing system. We had a lot of fun in that class, but there were many sleepless nights. Knowing the headache that goes into maintaining a PBX, we were psyched to use something out of the box and well documented like Twilio.

What are your future plans for the product?
MK: Right now we’re just trying to get the word out about Rotobooth. It’s the third photobooth we’ve built, and we’re happy with the case design and new software features. The next step is to further play into the phonebooth aspect of the device. I’d love to setup a second booth at a remote location and allow distant people to take photos together. Maybe they pose together, maybe they photo-bomb each other. We’ve also been coveting a red telephone box like they have in England.