Last March, we opened up Twilio Fund Europe to help kickstart European companies building their business using Twilio. We were amazed by the amount of applications, and the quality of DOers changing communications. Today, after much deliberation with our fund partner 500 Startups, we’re excited to announce the winner of Twilio Fund Europe-OnePageCRM. 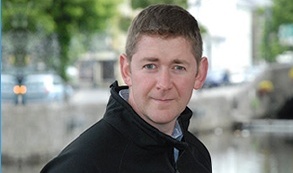 What’s in a name? For OnePageCRM, their name is a promise to their customers. OnePageCRM CEO Michael Fitzgerald (pictured right) wants their CRM to be a one-stop shop their clients’ needs from logging information to contacting customers. “We want to stay true to our ‘one page’ promise, so our new call functionality will be hard coded into the app itself,” says Michael.

To keep true to that promise, the OnePageCRM team is building a new in-app call function powered by Twilio. Their previous Skype plug-in solution required users to leave their CRM and dial through a separate app.

They’re even building billing into their app. Fitzgerald wants to make the user’s initial experience seamless within their CRM. “We plan to offer all customers a 30 day trial period for our calling service, which will log call times and much more. After this, they will be offered the option to top up directly through us each time they need more minutes. Twilio’s infrastructure makes this a fairly easy integration, and the billing structure fits the business model perfectly.”

When Fitzgerald pushed the proverbial big red button and launched OnePageCRM in December 2010, he raised a few eyebrows — on his technical team.

The product was fledgling. It was a few months into development and was considered a ‘hacker time’ experiment by the technical team. But, the experiment, initially created to see what client services team could build alongside their existing portfolio developed into something more.

“I was inspired by the words of [LinkedIn founder] Reid Hoffman, who once said ‘If you are not embarrassed by the first version of your product, you’ve launched too late,’” Fitzgerald remembers. “We launched warts and all, and we were more than a little embarrassed by that first run.”

While the company’s initial ship had a few errors – there were functional bugs that prevented users from even logging in at first – OnePageCRM actively gathered feedback from users on Twitter, and Facebook and iterated quickly. “We set up filters on Twitter services like Hootsuite and contacted expert sales people in specific fields such as lead generation, asking them to get involved and to let us know what they wanted from a service like ours. That all proved invaluable in shaping up the lean product we offer today.”

‘Sales Actions Help You Sell, Not Fancy Graphs And Charts.’

The team at OnePage designed their CRM with day-to-day sales actions in mind. The focus of the platform is on the micro actions that sales teams take to convert leads and make opportunities into customers.

“The larger, more traditional players in the CRM software market effectively offer vast database systems of alphabetized potential customer contacts. Once this information goes in, it’s effectively dead data which is getting ever more out of date with each day that passes,” explains Fitzgerald. “Our product operates on a system of actions and reminders, with the most pressing and time sensitive listed at the top. Once the salesperson completes a task, OnePageCRM will ask them to immediately add a follow up action to be completed later, be that a following up call, attending a face-to-face meeting, or whatever comes next. This new action then goes down the list, and will return to the top at the appropriate time.”

Michael credits the GTD (Getting Things Done) philosophy for the new structure of OnePageCRM. With seed funding, Twilio Fund and a new set of customers under their belt, it looks like the team’s philosophy is working well.

OnePageCRM team will be on hand to present their story at TwilioCon Europe 2013 in London on 21st October. Register here.