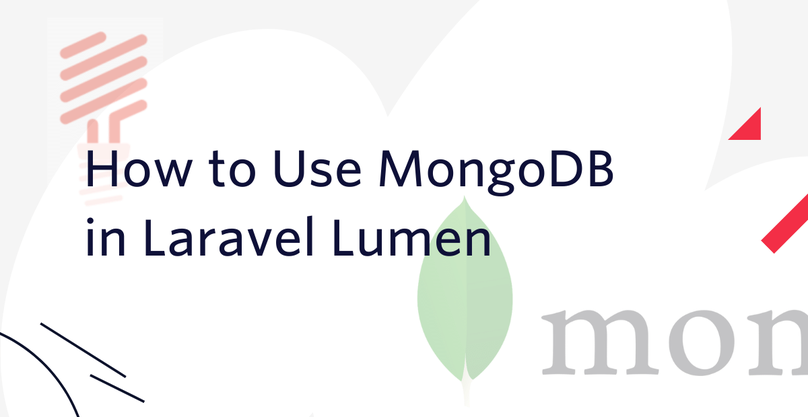 One of the most widely adopted versions of NoSQL is MongoDB, an open-source document-based database used for cross-platform document-oriented database programming.

In this tutorial, you will learn how to use MongoDB in a Laravel Lumen application, to store, edit, and read data.

In order to complete this tutorial you will need access to the following:

MongoDB is a document-oriented, NoSQL database that does not rely on tables, supports transactional queries, and has a powerful search query system while using a simple and common query system, returning the data in JSON format to be consumed.

Advantages of MongoDB with Lumen

Just in case you’re new to implementing MongoDB within Lumen, here is a more comprehensive look at the benefits:

To begin, you will install Lumen into a specified folder, before configuring MongoDB. Open your terminal/command line and run the following code to create a new Lumen project:

Change into the newly created project folder lumen-mongodb, and start the application on port :8000 by running the commands below.

Next, generate an application key using the maxsky/lumen-app-key-generator package. Run the following command to install the package:

Next, add the command into your kernel file in app/Console/Kernel.php.

Now, open up your terminal and run the following command to generate a new application key:

The key will now be available near the top of .env.

After installing and setting up Lumen, you’ll need to do three things:

Next, register the Laravel MongoDB Provider to support the newly installed package by adding the following code to bootstrap/app.php, underneath // $app->withFacades();.

Then, uncomment the following line.

After the installation is complete, create a new directory named config, and in that directory a new file named database.php. This new file supports the MongoDB connection and makes it the default database for the application. This code will update your .env environment variables to determine where your MongoDB cluster is located.

The DB_URI environment variable, in the preceding example, is generated by MongoDB when you generate a new cluster. To retrieve it, follow the instructions in this article which shows you how to install your MongoDB client, obtain your MongoDB connection string (URI), and connect to your MongoDB instance.

After the cluster has been generated, add the following snippet to the bottom of .env and replace the placeholder <MONGODB_URI> with the retrieved MongoDB URI.

Interact with the MongoDB Database

With the installation process out of the way, next up, you have to create an application model that will target a collection in MongoDB and fetch the relevant data from it. After which, a new controller will be generated to fetch data from the MongoDB database.

Creating a new model allows us to connect with MongoDB and interact with a specific collection in the database. Upon connection, we can then specify the columns that can be filled, specify id in some scenarios, and so much more.

Create a new file, named Blog.php, in the app/Models folder and add the following code to it:

After that, add the following use statement to the top of the file:

In the previous code block, the private variable $connection stores the database connection. This is important because, by default, Lumen uses MySQL as its default database.

Next, the variable $collection specifies the name of the MongoDB database collection to query. When a request is made through a route, picked up by the controller, and sent to the model, the requested data is fetched from the specified $collection.

To interact with the model created, a controller needs to be created and functions added to it. Upon completion, this controller will be able to fetch, update, create, and delete data in the specified MongoDB collection.

To do this, create a new file in the app/Http/Controllers directory, and name it BlogController.php. Then, in the newly created file, add the index() function as described in the next section. This function will retrieve all the blog items from the collection and return them in JSON format.

After that, add the following use statements to the top of the file:

The next step is to create a route that will accept the API request and return all the blog items from the collection as a response.

To do that, at the end of routes/web.php create a new route that targets the index() function in the blogs controller, by adding the following code.

To test, we will be using curl on our terminal to make a get request to the all route. This request will interact with the specified controller to get data from the collection, use the model, return a response that contains the data in a JSON format, and display it in the terminal.

To do that, run the following code in your terminal:

You should get a response similar to the following JSON example:

That's how to use MongoDB in Laravel Lumen

In this tutorial, you briefly learned what MongoDB is and its advantages for developing large-scale applications; including fast data queries and document-based data storage.

Then you created a new Laravel Lumen application and integrated MongoDB into it so it could interact with clusters and collections. Lastly, you learned how to fetch rendered data in JSON format in response to an API query.

I hope this article gave you a broad introduction on how to use MongoDB in your next Lumen project. If you want to clone the code used in this article and look further into it, you can use this GitHub repository.

Kenneth Ekandem is a full-stack developer from Nigeria currently in the blockchain space, but interested in learning everything computer science has to offer. He'd love to go to space one day and also own his own vlogging channel to teach the next generation of programmers.