Forest fires are burning in Singapore and Indonesia. Here in San Francisco, news about the fires is contained to climate change blogs and a few tweets. It’s easy to feel distanced from a problem when you’re 8,435 miles away.

The fires aren’t a result of climate change, or a drought. They’re man made and illegal. They wreak havoc on the forest ecosystem and produce a toxic haze that blankets Singaporean cities, affecting millions of citizens’ health.

A small group of volunteers from the World Resource Initiative made it their mission to stop the wildfires using using NASA satellite imagery, GIS satellites, and Twilio SMS. Everyday, they’re spotting fires from space, putting them out on the ground, and holding corporations responsible for the way they source palm oil.

Palm oil? Yes. It’s a $40 billion dollar market that’s vital to corporations like WalMart, Unilever, McDonald’s and more. The quickest way to get a palm oil manufacturing facility up and running is to burn down the forest.

The wildfires are changing the shape of the forests, the lives of citizens in Singapore and Indonesia, and the global economy. Palm oil is used in everything from coffee lids, to soap, to deep fried food, and thousands of different plastics. What starts in the forest ends up in the homes and hands of billions of consumers in the form of palm oil. 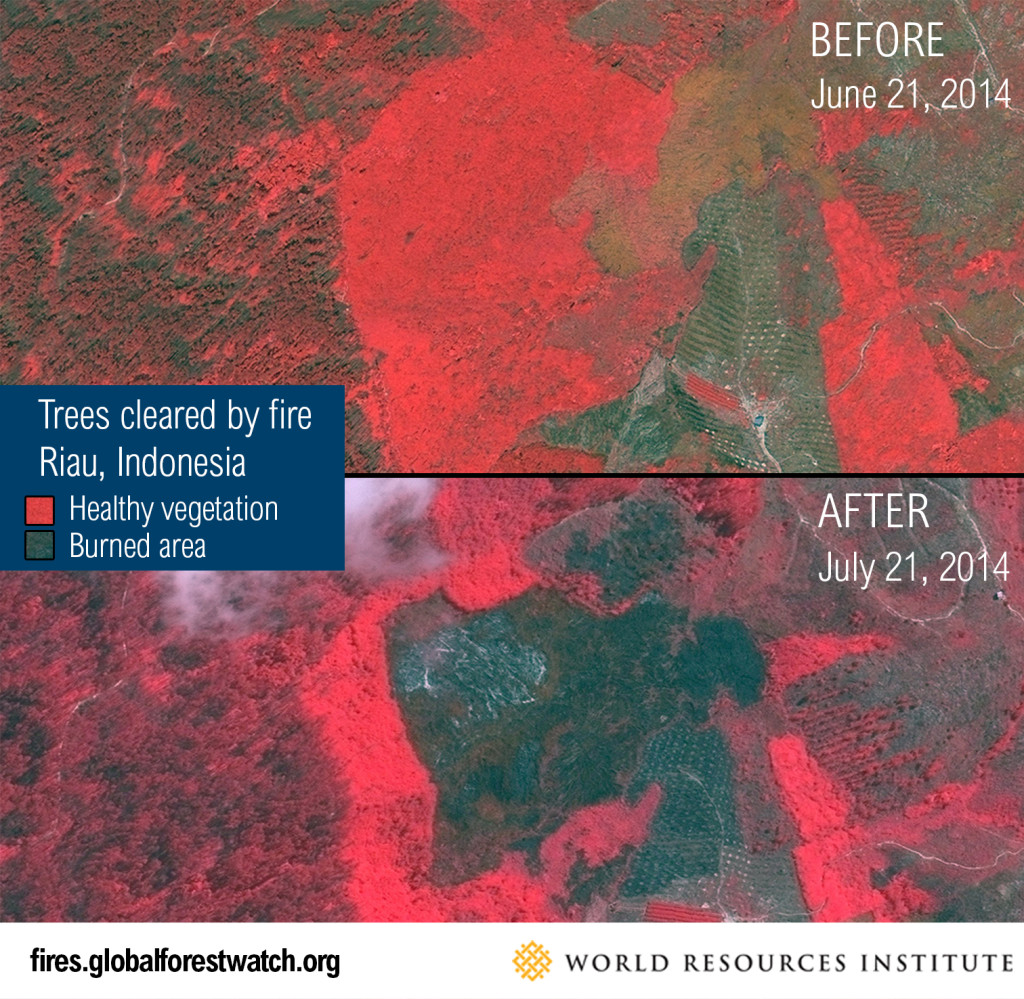 Fires, Photos, and a Fax Machine

WRI enlisted the help of ESRI, BlueRaster, NASA, and Twilio to spot fires and snuff them out. NASA’s satellites identify hot spots and relay the coordinates to ESRI’s GIS satellites which take a picture of the fires. At the end of this highly technologically advanced system, all the information was sent via fax. Yes, a fax. Worse, the fax would arrive to Singapore’s Ministry of Forestry in the late afternoon, after staff had gone home. The staff wouldn’t see the update until the next morning, then they’d start the trek into the forest to meet WRI.

It would typically take 30 hours to get the fire data from satellite to volunteer on the ground. WRI knew they needed a different way to relay data, but email, web and phone calls were all out of the question. Volunteers don’t have internet access in the deep forest, but they do have SMS enabled phones.

With the help of Blue Raster, an agency specializing in GIS services, WRI integrated all their satellite data and replaced their fax notifications with Twilio SMS notifications. “It was a very, very rapid turnaround,” said Michael Lippmann, Co-Founder of Blue Raster.

Now volunteers get updated information on fires in the area in the morning and afternoon via SMS, cutting their response time down to four hours, from 30. WRI staff receive a text relaying the starting coordinates of the fire, where it’s moving, it’s speed, and wind direction with a link to a map.

The solution is a giant step forward for WRI, but just one step along the way in their larger mission. “The goal is to drive change. We want to add more transparency to the supply chain,” says Lippmann.

The wildfires produce a toxic haze that drapes over large parts of Singapore, and drastically reduces the air quality in the area. Over 11,000 people in South East Asia are affected by the haze, spawning social media movements like #StopTheHaze. Singapore recently introduced a groundbreaking Transboundary Haze law which relies on data pulled from WRI efforts. Now, Singaporean and Indonesian governments can prosecute companies who contribute to the haze, based on WRI’s evidence of where the fire originated, what plant it came from, and which corporation is responsible. The law carries steep punishments, citing a 1.6 million dollar fine and jail time for the CEO of any company found responsible for contributing to the haze.

Punitive justice is not at the forefront of WRI’s concerns. As of now, they’re just trying to save lives more efficiently and faster with Twilio SMS. But, with the tremendous data they’re gathering WRI, ESRI, and Blue Raster hope to change the culture surrounding the fires, encouraging responsibility and stomping the true cause of the fires out at its source.