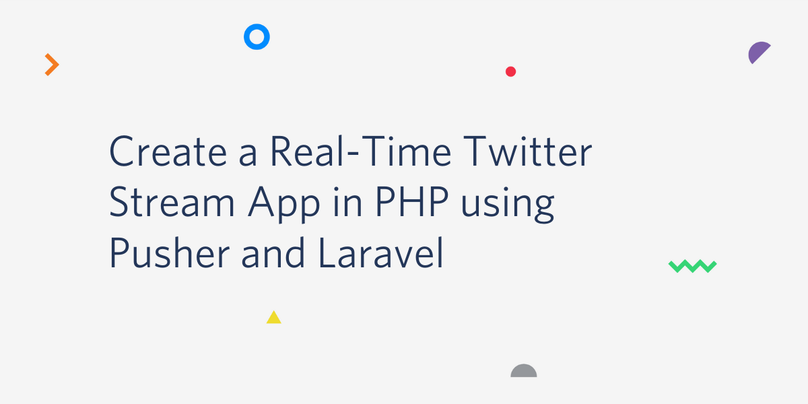 Laravel is one of the most famous PHP MVC frameworks, largely due to its commitment to modern architecture and active community. Laravel 7, the latest release, has added the coolest new features like Blade-X, Stubs, Cache optimization, and much more.

Pusher is the hosted service that enables developers to add real time data and functionality easily and securely by taking care of all the heavy lifting under the hood.

Laravel supports Pusher integration very gracefully, which makes it very easy for developers to add real-time functionality to their application. In this tutorial, we will be using Twitter APIs to fetch tweets based on a specific hashtag, and create a dashboard to display them in real-time using Pusher.

How does Pusher work?

Pusher uses Channels to provide real-time communication between the server and the client. What are these Channels? Pusher Channels are based on the popular Publish/Subscribe Model. In the publish-subscribe model, senders (called publishers) don’t send messages directly to receivers (called subscribers), they send messages into a specific categorized channel without knowledge of the subscribers. Anyone who is a subscriber to that specific channel will get the message.

To complete this tutorial you will need the following:

Set Up a New Laravel Project

If you don’t have Laravel installed in your system, a quick download from the Laravel Official Documentation will get you started. A setup guide can be found in the Laravel docs.

Let’s start with setting up a new Laravel project named pusher-tweets. Remember, you can give your project any name you want. Run the following command in your terminal to begin:

This will install Laravel v7.0, along with all the dependencies required by it. Composer post-create scripts automatically create the .env file for us and set the APP_KEY environment variable. If you’re unaware, the .env provides secure, non-cacheable storage of our application security credentials.

Add the APP_KEY in the .env file by running this command, if it is not configured automatically.

Let’s add the frontend where we will integrate pusher for real-time communication to exchange data related to the latest tweets. I have coded a small frontend for tweets which you can find also find on codepen “Twitter gradient animation card”.

Create a new file tweets.blade.php under resources/views directory and copy and paste the code below.

We have added the asset reference for custom CSS and JS on line 8 and 16 in the code above. We can also see that on lines 14, 16, reference to JS is commented. We will uncomment that, later on while integrating with Pusher at the client-side.

Let’s now add the assets to the public directory.

In the public/css folder create a new file style.css. Copy the code below into your style.css file. You will need to create the css folder inside of the public directory.

Awesome, let’s now add the route for the tweets.

Implementing Authentication in Laravel is very simple, as everything is already configured for us out of the box. We are not putting this route behind Authentication for demo purposes, so we don’t need to set up the database.

NOTE: I highly recommend using authentication for production, or before making the application live to keep the data safe.

Open the web.php file under the routes folder and add the following code:

We can check whether everything is working perfectly or not by running our application with a simple Artisan command. Make sure that you’re in the project root and run this command to start your local server: 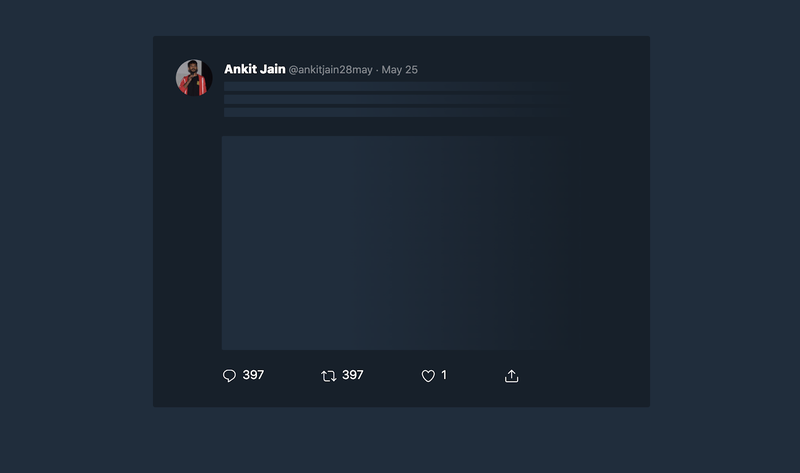 Our client-side is almost ready and working fine. Let’s add the next part; fetching tweets from Twitter using Twitter APIs.

We will be using the laravel-twitter-streaming-api composer package to easily integrate Twitter Streaming API with Laravel.

Install the package by running the following command inside the pusher-tweets directory.

Once the Composer package is installed and the config has been created, we need to add the following environment variables in the .env file.

In order to obtain the credentials above, we need to create a new developer app called “Pusher Tweets” in the Twilio Developer dashboard. You can read more about creating an app from the Twitter Official Page.

The “Consumer API keys” and “Access token & access token secret” will be generated after your app is created, as shown in the image below: 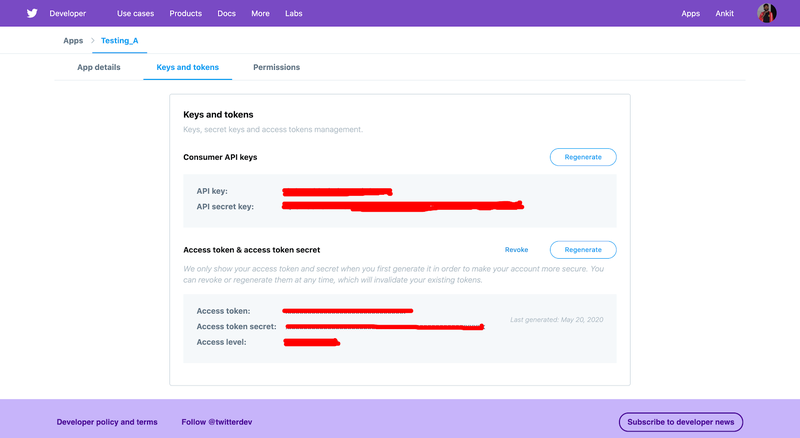 Now that these credentials have been generated, copy their values to the .env as outlined in the previous step.

Let’s continue to the next part of writing functionality to fetch tweets in real-time using the above composer package. For this, we will be creating a console command to run independent to our Laravel application.

Let’s add the code to stream the tweets in real-time in the TweetsStream.php file created in the app/Console/Commands directory.

In the code above, we will be listening for hashtag “#twilio”, we can listen to as many hashtags as we want and pass them as a comma (,) separated string into the TwitterStreamingApi::publicStream()->whenHears() function.

I made the dummy tweet “Hello World #twilio” to test it out. Write your own tweet using the #twilio hashtag and monitor the output. You should see something similar to what is shown in the image below:

If this is working then everything is going as expected. Now let’s integrate Pusher within our application to render tweets in real time.

As a reminder to our introduction,Pusher uses channels for real-time data communication. We will leverage this logic to build out the next steps.

Login to Pusher and create a new pusher channel app as shown in the image below: 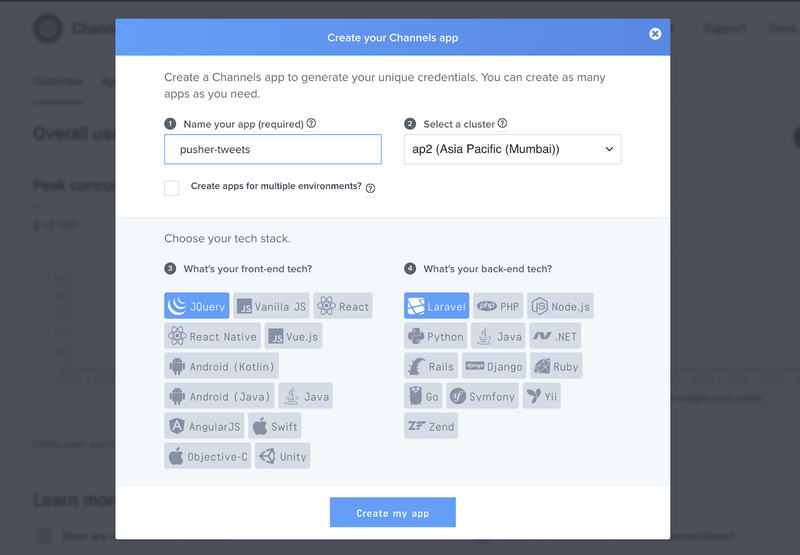 Once we create a channel app, we will get the “Pusher App ID, App Key, App Secret, and App Cluster”. Open your .env file and replace the values respectively.

Let’s go back to our tweets.blade.php where we have commented lines 14 and 16. Uncomment those lines and subscribe to “tweets” event in “pusher-tweets” channel as shown in the image below: 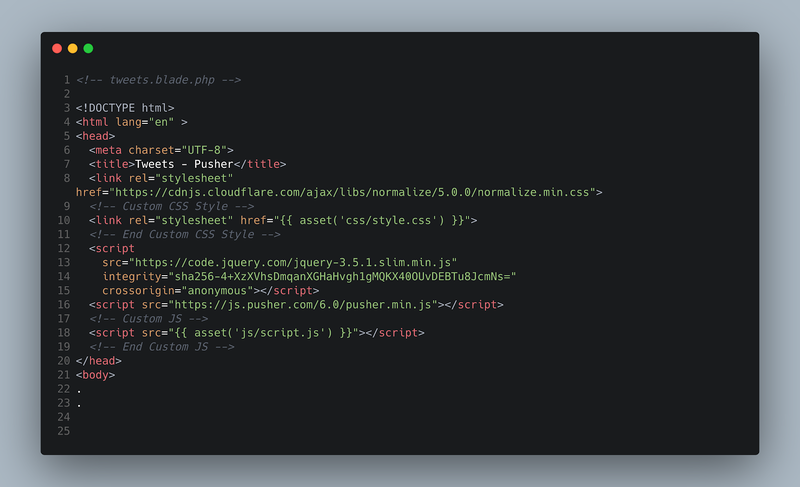 Next in the public/js folder create a new file script.js. Copy the code below into your script.js file.

Make sure to replace the PUSHER_APP_KEY and PUSHER_APP_CLUSTER placeholders with the appropriate values as seen in your .env.

In JavaScript, we have subscribed to the channel “pusher-tweets” and bound the “tweets” event so that any data sent to this channel with this particular event will be available to us directly at client-side in real-time.

With the data, we will be doing some DOM (Document Object Model) manipulation like updating the image, username, name, date, and user reaction.

Awesome! We have now integrated the Pusher channel at the client-side. We will also need to do the same in our Laravel Application in order to broadcast our tweet data.

Laravel supports the integration of Pusher using Events out of the box. Let’s install the Composer package for Pusher by running the following command:

If we check the config/broadcasting.php file, we can see that multiple drivers like "pusher", "redis", "log", "null" are supported by Laravel for the broadcasting of events. Let’s set the driver to Pusher by setting this environment variable as follows:

In the Events Class above, we have defined the channel which our application will publish the events to, the name of the events, and the data that we will be broadcasting. In Laravel, we can broadcast the message simply by using the broadcast() function.

The next important step is to modify the console command to broadcast the Tweet data.

Open the TweetsStream.php file in app/Console/Command directory and add the following code in place of var_dump at line 63.

Congratulations!. You have completed integrating Pusher with your Laravel Application to communicate Tweet data in real-time. Let’s test it out.

Let’s add more hashtags so we can have more data before running our console command. In TweetStream.php, replace #twilio with  #covid19.

It will look similar to this:

As you can see, our page is now updating with the latest tweets in real-time. We can check the overview page on the Pusher Dashboard for the messages/data that we have sent using pusher.

In this article, we learned how to use Pusher for real-time data communication with Laravel. With Pusher, we can do more like add some visualizations and update the graph in real-time, sending messages. We can also extend this to add features like sentimental analysis of user tweets to predict something based on user’s tweets and generate reports.