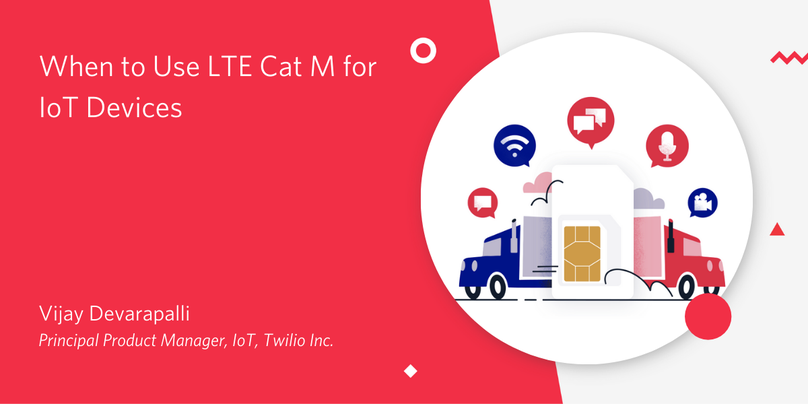 What is Cat M?

There are key benefits of Cat M for both the Mobile Network Operators (MNOs) and IoT builders.

The main benefit to MNOs is that Cat M devices operate on much smaller frequency bands (1.4 MHz). This allows them to pack more devices into the available spectrum at each cell site. A typical LTE cell site can support 10x the amount of active Cat M devices compared to active regular LTE devices.

The main benefit to IoT builders is that Cat M modems use less power, enabling power-constrained devices to operate for months or years on a small battery with advanced power saving features. Cat M modems also boot up faster than Cat 1 modems from cold boot up, resulting in faster connection times. Another key advantage is that Cat M modems tend to cost less than regular LTE modems, which helps in reducing the hardware cost.

The power-saving features of Cat M

Depending on the use case, you may need to use just eDRX, PSM or both. Note that not all Cat M networks support eDRX and PSM, yet most do today. We expect the situation to keep improving, with more networks turning on these two critical features to enable power-constrained devices.

While Cat M presents a tremendous opportunity for power constrained IoT devices, there are some drawbacks as well.

As should have become clear by now, Cat M is best suited for IoT devices that are power-constrained and exchange low volume of traffic with your application cloud. Here are a few example use cases:

In general, any device that operates on small batteries, which can’t be replaced or recharged easily, benefit significantly from using Cat M.

When LTE Cat 1 is better than Cat M

If your IoT use case involves maintaining an “always-on” connection between your devices and your application cloud, then an LTE Cat 1 (or Cat 3/4) modem is better suited for your device. In an “always-on” mode, which prevent your devices from ever sleeping, you are not taking advantage of any of the power saving features provided by Cat M, but at the same time facing the constraints of being on a low bandwidth connection, and getting forced to disconnect when there is congestion at the local cell site to which you are connected.

Regular LTE coverage is far superior to Cat M coverage. There are countries where Cat M is not available and even if available not all mobile network operations in that country support Cat M. So when you use Cat M for your IoT devices, it automatically translates into fewer options with respect to available connectivity providers.

If your device routinely transfers large amounts of data to/from the network, a regular LTE modem may be a better option than a Cat M modem. The low bandwidth provided by a Cat M connection means the device has to stay online for a longer period of time to transfer the large files.

If you are using PPP (point to point protocol), some of the Cat M lower power modes are not supported. These modems prevent entering into the low power modes when PPP is used.

Twilio Super SIM supports both regular LTE and Cat M devices. It is agnostic to the LTE category; it supports devices belonging to all LTE categories. While Cat M was designed for IoT devices, we suggest taking the Cat M constraints described above into account before choosing an LTE modem for your IoT device.

Vijay Devarapalli is a Principal Product Manager for Twilio IoT, responsible for the Twilio Distributed IoT Mobile Core that drives Super SIM and other IoT cellular connectivity products. Vijay is a telecom industry veteran, having designed and built 3G and LTE packet core and edge computing solutions, as well as technologies for improving radio network efficiency. He has also made significant contributions in the standards space, having authored 17 RFCs in the IETF and numerous contributions to 3GPP LTE specifications.