On August 1st, Oscar Bolmsten tweeted about how he found a malicious npm package called crossenv that scans for environment variables and POSTs them to a server.

@kentcdodds Hi Kent, it looks like this npm package is stealing env variables on install, using your cross-env package as bait: pic.twitter.com/REsRG8Exsx

This is particularly dangerous considering that you might have secret credentials for different services stored in your environment variables. Apparently it’s also not limited to just crossenv, but a series of packages — all of them are names of popular modules with small typos such as missing hyphens.

Check your project for malicious packages

These packages have been taken down by npm, but since credential theft happens upon installation, you should check if you have installed one of them. Ivan Akulov was so kind to compose and publish a list of (at least some of) these malicious packages on his blog. He also wrote a small one-liner that you can execute to check if these packages are installed in your current project:

Search for infected projects on Mac/Linux

If you are like me a person who regularly develops Node.js applications you might have a series of projects and not just one project to check for. I extended Ivan’s command for that reason using find and xargs to actually scan all subdirectories of the folder that contains my projects and execute Ivan’s command there. You can run it by simply copy pasting this command into your command-line:

I know this is quite a long command so what does it do?

Search for infected projects on Windows

That command works when you are on Mac or Linux.. Corey Weathers wrote a small PowerShell script for that will do the same thing on Windows:

How do I see if it found a malicious package?

The output should be similar to this example (where I actually searched for express instead to demonstrate it). 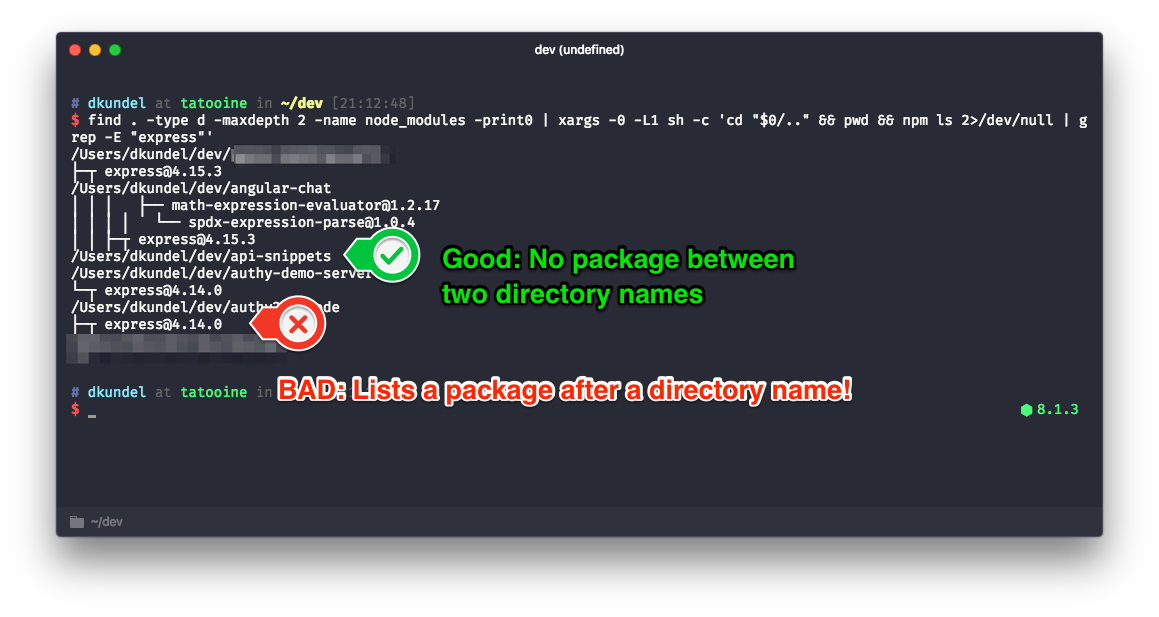 What if a malicious package was detected?

It didn’t find any malicious packages so I’m good right?

Well this is just a list of packages that we know of but since the npm ecosystem is massive it’s hard to know if these were all. So if you want to be sure simply rotate the secrets nevertheless.

What if I found another malicious package?

If you found another malicious package make sure to report it to npm that it can be taken down as soon as possible. There is more information on how to contact them at on their website or simply shoot an email to security@npmjs.com.

Is there a way I can see if my Twilio account has been compromised?

If you discovered you used one of these libraries with an application using your Twilio Account Credentials you may want to check for unusual spike in product usage, such as phone calls or messages. Also make sure to change your secret or API Key/Secret depending on what you use.

In case you have any questions feel free to shoot me a message: