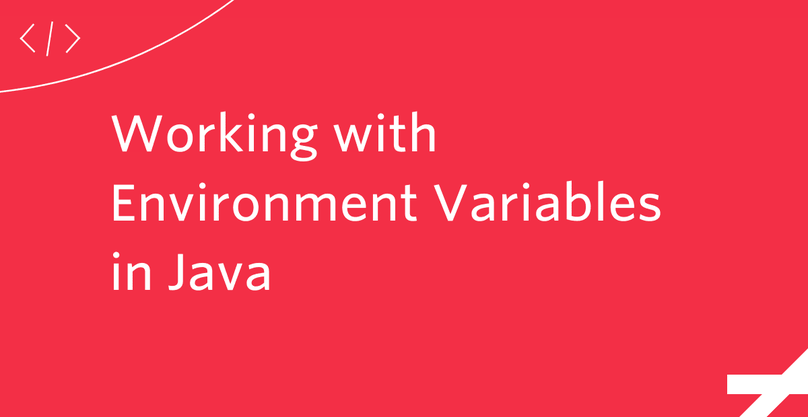 Environment variables are a great way to configure Java applications without having to explicitly store settings in code, such as for database and caching servers, or for third-party APIs.

Keeping such settings outside of the code has several distinct advantages:

In this short article, I'm going to show you some of the ways of working with environment variables in Java.

One of the most common ways is to use System.getenv(), which accepts an optional String argument. Based on whether a String argument is passed, a different value is returned from the method. Specifically:

Keep in mind that different platforms operate in different ways, e.g., on UNIX, Linux, and macOS, environment variables are case-sensitive, whereas on Microsoft Windows they are not.

Below, you can see an example of how to use the method to retrieve the Linux SHELL environment variable (which contains the user's shell).

If you want to supply a default value, call System.genenv() as follows:

As well as reading environment variables, it's helpful to know how to set them. I won't go into too much detail, instead sticking to the essentials. However, if you'd like to learn about them in greater depth, Dominik Kundel has written a detailed blog post about them.

On UNIX, Linux, and macOS, environment variables can be set in three core ways.

Available to the current session and all child processes

Available to the current session

You can initialise an environment variable so that it's available to the current session but not any child processes, as in the example below, by not using the export command.

Available to a specific process

Finally, you can initialise an environment variable so that it's available only to a specific process. This is helpful when only that process needs the variable. You initialise it as in the example below, when starting the desired process.

Setting environment variables is a little different in Microsoft Windows. You can either set them via the Control Panel, or you can set them in the command prompt or PowerShell console. There are examples of the latter two below.

While setting environment variables this way can be very effective, it can also become cumbersome rather quickly. For example, by setting them in the operating system's shell, there is no concrete list of the variables which the application needs, nor is there information available about what a variable is for or what data type it must be.

Given that, among other reasons, The 12-Factor App recommended a strict separation of config from code. This practice quickly took hold throughout the developer community commonly through the use of .env (dotenv) files. These are plain text files that store a list of key/value pairs, defining the environment variables required for an application to work, as in the example below.

To simplify getting started on a project, a further common practice emerged, that of including a .env.example file in a project which contains all of the keys—but without their values. When a new developer started working on the application, they would copy the file, naming it .env and set values for each key applicable to their local development environment.

Assuming that the example above was the .env file for our project, we could use a package such as dotenv-java to make the variables available to our application.

If you're developing in Kotlin, you can use dotenv-kotlin.

You can see an example of using the package in the code example below.

The code initialises a new Dotenv object, dotenv, and calls Dotenv.configure().load() to read in the environment variables in .env, located in the project's root directory. Following that, dotenv.get() is used to retrieve the value of the String object passed to it. If a matching key is not found, the method returns null.

You can supply a default value as the second argument to the method if desired.

It's important to bear in mind that if sensitive data is stored in .env, that it must not be stored under version control. If that happens, then all of the security benefits of using dotenv files is lost. That's why it's common to exclude them from version control, such as by adding .env (and variations of the filename) to a project's .gitignore file when using Git.

That's how to work with environment variables in Java

I hope this article helped you understand how to use environment variables in your Java projects.

Do you have any other ways to work with environment variables? I’d love to know!

How to Make a Clicker Game with Java

Learn how to make a clicker game to keep track of how many clicks an image has using Java Spring Boot technologies.

Get to Know Java SDKs and Libraries

Get an overview of some of the SDKs and helper libraries available for the Java programming language.

How to Set Up and Deploy a Java Spring Boot Application

Learn how to quickly set up and deploy a Java Spring Boot application locally and to a publicly hosted domain.

How to Organize a Lunch Order with Java and Twilio SMS

Learn how to add and view entries in an array list using Java, Maven, and Twilio SMS to organize a group lunch order.