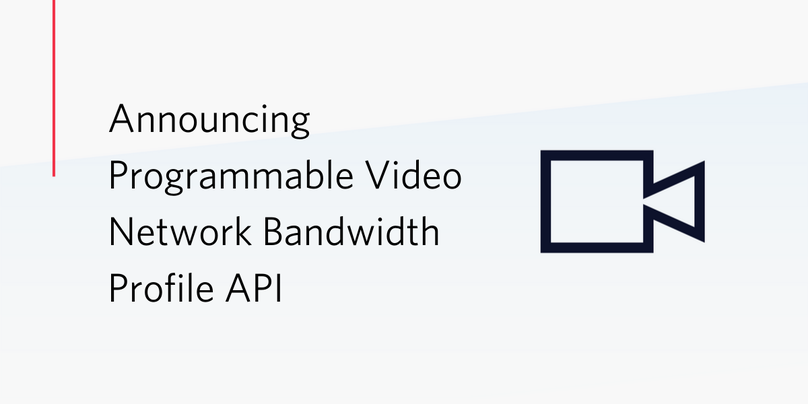 We are thrilled to announce that the Network Bandwidth Profile API is now available via Public Beta: a Programmable Video API designed to improve the quality of experience in Group Rooms. Before this release, video bandwidth was split equally between tracks, which meant that lower and higher priority tracks received the same treatment. Now with this release, developers can specify how the available network bandwidth is allocated, reallocate bandwidth to higher priority tracks, protect audio quality, and optimize battery and network resources consumption.

Why a Network Bandwidth Profile API?

Programmable Video Group Rooms are based on an SFU (Selective Forwarding Unit) architecture. This means that participants publish audio and video as independent tracks to the SFU server, which in turn routes them to the rest. Hence, the number of subscribers tracks per participant grows as N-1 where N is the total number of participants.

The SFU can control the quality of the forwarded track. For this, it needs to determine what bandwidth to allocate to each track: the higher the bandwidth the higher the fidelity. However, this is a non trivial process that requires the following considerations:

A Network Bandwidth Profile is a specification defining how the available downstream bandwidth of a participant should be allocated. The Network Bandwidth Profile does not define which tracks a participant subscribes to (that’s the task of the Track Subscription API) rather, it controls the bandwidth allocation (and quality) of the subscribed tracks.

Before working with Network Bandwidth Profiles we need to understand two new concepts:

A Network Bandwidth Profile is a JSON object containing the following properties:

Getting started with the Network Bandwidth Profile API

To use the Network Bandwidth Profile API you need first to determine what are your higher priority video tracks. Note: audio tracks are always considered as a top priority and that cannot be changed. For example, in a collaboration application you may wish to set the screen share track a high priority. This is done at track publication time, as the following code snippet illustrates:

If you don’t specify any priority, video tracks are published with priority standard.

Next you have to define your Network Bandwidth Profile. For this, the first step is to select the mode. The following guidelines tend to be useful for that purpose:

After that, you just need to select the rest of parameters that best fit into your use-case requirements. Check our official documentation for further guidance on how to do it.

Once you have decided your settings, you can define a Network Bandwidth Profile at connect using the following code:

We want your feedback

The Network Bandwidth Profile API is essential for creating high quality Twilio Programmable Video applications. This is why we consider this API as a critical feature of our platform.

To learn more, check out the docs. Questions or feedback? Don’t hesitate to reach out to us.