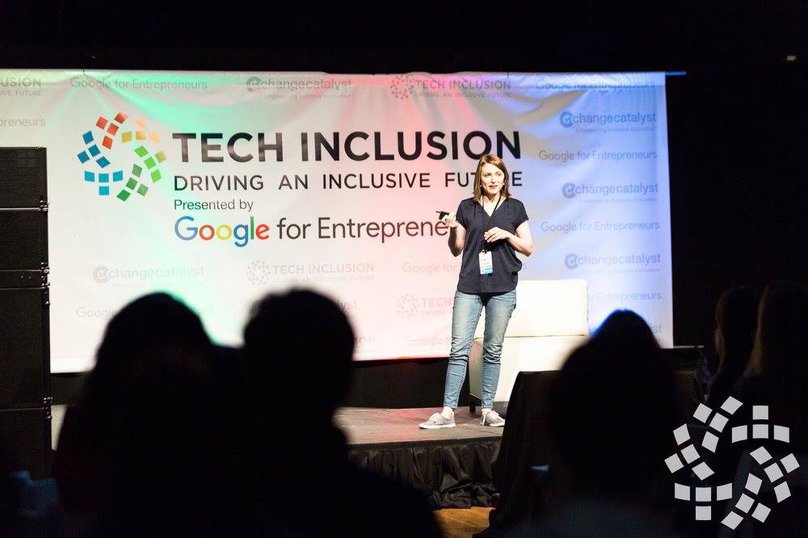 Becoming a software engineer in 2012 not only introduced me to work that would always be interesting, it also tripled my income. That was really empowering.

My new career came with a cold dose of reality, however—there wasn’t really any kind of diversity represented in the technical teams I saw. As I thought about why that was, I wondered why no one had ever pointed out that I might be interested in software engineering. After all, I was the only girl I knew or member of my family who’d taught myself to navigate DOS as an 8-year-old and memorized all the WordPerfect commands. The first time I accessed the internet, I spent hours looking up topics that interested me at the time—mostly Tamagotchis. I picked up some Visual Basic 6 in the .Exe Filers computer club at school, snuck Juno dial-up onto the family computer, and wrestled with HTML to make a dropdown on my blog. Maybe it was because I was a girl?

As I began my journey into tech and started enjoying all the perks—swag galore, snacks all day and free food at Meetups, Odwalla smoothies for the taking, flexible vacation time—the contrast between the life I’d had and this new world was striking. I’d been struggling to pay rent while working full-time, and now I could cover bills and eat out occasionally. My heart went out to underrepresented people in the situation I’d been in. What could be done to keep them from being displaced by tech? It seemed like what had worked for me could work for others, so I began to help great organizations like RailsBridge, PyLadies, and Women Who Code.

However, the barriers to a career transition like mine grew. The tuition of training programs like the one I’d attended tripled while the cost of housing spiked. Even free introductory coding classes all required attendees to have laptops. Though some companies and training programs worked together to start scholarships, none of the scholarships helped participants pay for housing, childcare, and other bills while making a career transition full-time. I saw new junior engineers struggle to find jobs when they didn’t already have a tech network and felt like programs should include placement.

Then, in 2015, my spouse’s coworker was featured on a company ad and there was a lot of public doubt that she was a software engineer because she was a woman of color. I had the idea to respond with billboards showing underrepresented engineers. When she came up with the #ILookLikeAnEngineer hashtag, I spread the word to women-in-tech groups and on different social media platforms. Within a few hours, the hashtag went viral and underrepresented engineers all over the world shared photos of themselves. With so much interest shown, we started the #ILookLikeAnEngineer ad campaign. In a whirlwind two months, I found and engaged volunteers, organized an event with a diverse panel, launched a crowdfunding campaign, managed logo and ad development, arranged photography of underrepresented engineers, raised $47,000 dollars, managed the ad launch, and distributed contributors’ perks. The hashtag and ad campaign had four purposes: 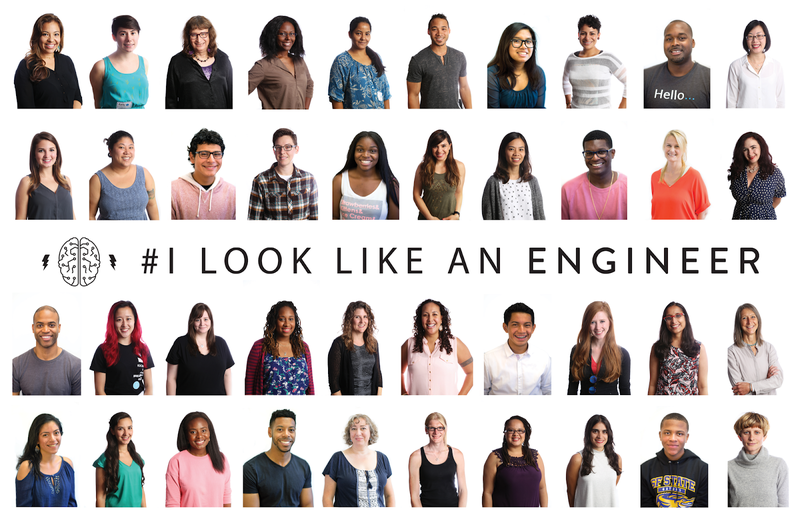 When the billboards came down and the dust settled, I realized two things: I could do hard, new-to-me things, and I wanted to take my community work farther—to change lives by helping those most in need of the opportunity I’d had to join tech.

I started organizing free coding workshops at computer labs in partnership with Bay Area nonprofits like the St. Anthony’s Foundation. It became quickly apparent that words like “coding” were unintelligible jargon to many, so flyers were changed to say “Learn how to build a website.” So many people liked the workshops and it quickly became clear that a full-time program was needed. Who better to invest in people than companies dedicated to building more diverse engineering teams and alleviating the income disparity caused by the industry?

That’s when I founded Techtonica—a nonprofit that provides six months of free tech training with living and childcare stipends to women and non-binary adults with low incomes. Upon program completion, graduates are placed with the companies that sponsored their training. 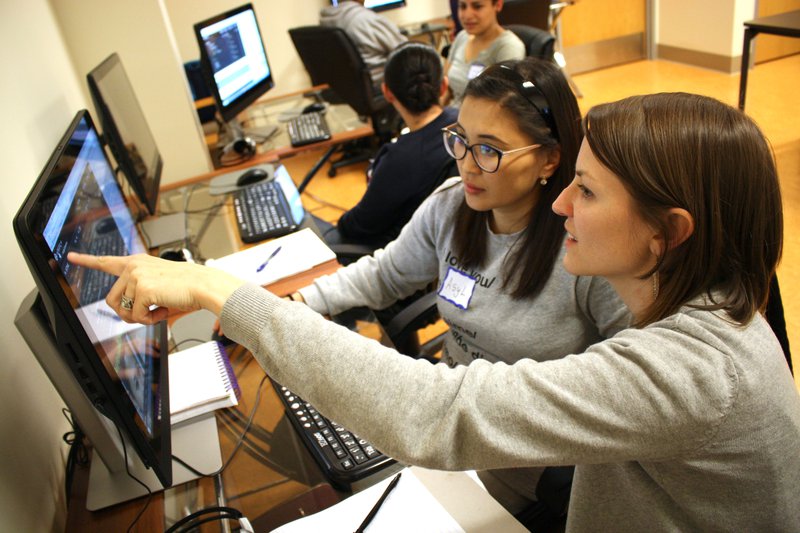 It took two and a half years for me to pull together all the right resources—a website, nonprofit partners, fiscal sponsorship, an open-source curriculum, laptops, a rigorous application process, the right participants, a board, space, funding, hiring partners, laptops, and more. There were many times when I wasn’t sure how Techtonica could possibly continue. My firm belief that this was a cause worth fighting for kept me going even as I also led a group called LadyNerds, the San Francisco chapter of PyLadies, and Diversity Advocates.

In January 2018, Techtonica’s first cohort of apprentices began six months of training. Starting the cohort was a leap of faith—we only had 1⁄3 of the necessary sponsors but hoped that more would commit when they met participants. It was a huge challenge to run the program while securing support. The road was very bumpy, but it was always my community connections that helped us make it through.

Watching the group become close and learn and grow professionally despite uncertainty about the future was really rewarding. Some days I’d listen to the participants and think, “They couldn’t have even said that sentence six months ago” because they had learned so many new technical words.

It wasn’t until the last few weeks of training that I was able to secure sponsors for every participant. At our graduation celebration, the apprentices talked about what made it hard to get into tech without Techtonica and showed their final projects, then we announced where they’d be working.

After graduation, I wasn’t sure if it would take another two and a half years to get sponsors or not, and I was going on three years of not being able to pay myself. So when my friend specifically reached out to me about a Community Developer job at Twilio, I was intrigued. Not only was the job description a good outline of so much of what I do already, every interaction I’d ever had with Twilio had been positive—I went to TwilioCon (now SIGNAL) as a new developer in 2013, attended several events at Twilio, organized a Meetup where a Twilio employee presented a tutorial, and really enjoyed the interesting projects that could be built with Twilio’s technology. The hiring manager told me he thought my experience with community organizing was exactly what they needed. He listened to my worries about not being able to handle the job while running Techtonica and set up a call with his very convincing manager, who’d run a large hackathon competition while working at Twilio.

As the weeks went by, I provided ongoing support to Techtonica’s graduates while making new plans for Techtonica’s next cohort. With each new meeting with Twilio, I began to think about how I would handle Techtonica and a job, and finally, I was convinced I could do it. With Twilio’s fantastic teams, flexibility, and support, I’ve been able to secure new sponsors for Techtonica and find apprentices for the next cohort while doing meaningful work for Twilio.

That’s how I came to join the Developer Community Team at Twilio! My first month was all SIGNAL—I utilized my community skills and connections to help with giving out scholarships, getting feedback on talks, and work out details with speakers. I also earned my red track jacket by writing a simple script called Voluntext. It enables me to text Techtonica’s volunteers—listed in a Google Spreadsheet—about upcoming events, something many volunteers have requested. Now I’m working on several projects to build and engage the Twilio community. I’m really excited to get to know members of the community and to introduce them to the other communities I manage. 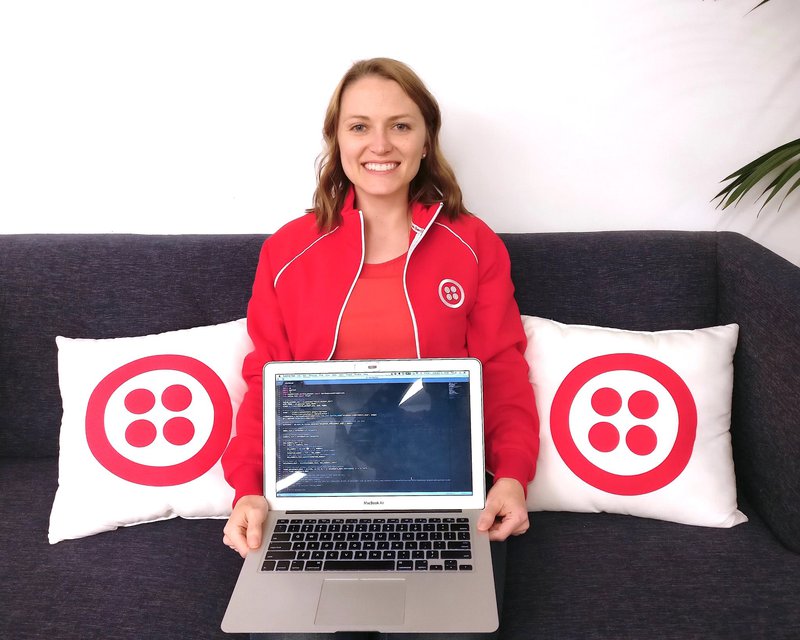