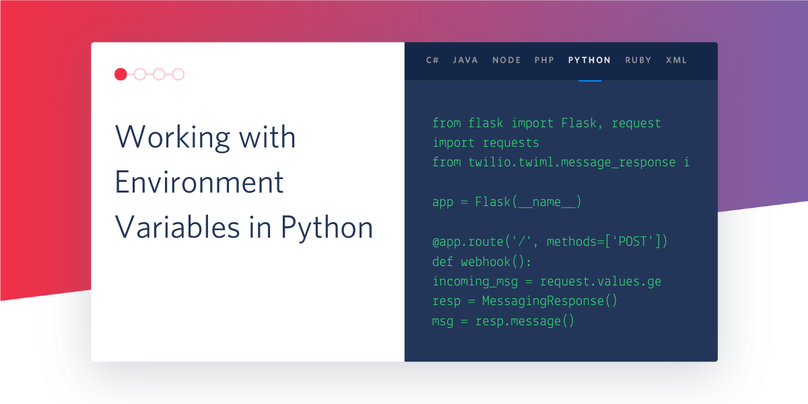 In this article I’m going to share some of the techniques and tools available in Python to work with environment variables.

Using this method, if you try to import an environment variable that doesn’t exist Python will raise a KeyError exception:

Getting the KeyError is a good idea for environment variables that your program requires, but there are situations where you may want to allow some variables to be optional. To avoid the error you can use the dictionary’s get() method, which returns None when the requested key does not exist in the dictionary:

Adding a default value if the variable is not defined

If you’d like to provide a default value for the missing variable that is not None, you can add it as a second argument:

Python also provides the os.getenv() function to access environment variables. This function works in a very similar way to the os.environ.get() method. Here is how to access a variable with it:

This function does not raise an error for missing variables, it returns None just like os.environ.get(). And it also accepts a second argument with a custom default value:

Is os.getenv() better than os.environ? That is really up to you. I personally prefer to use the os.environ dictionary, since it gives me the option of halting the program with a KeyError if a required variable is missing.

There are two basic ways to set an environment variable from a bash or zsh terminal session. One is using the export keyword:

A variable that is set in this way will be passed on to any programs or scripts that you start from this terminal session. Keep in mind that environment variables are not saved anywhere outside of the context of the shell session, so they will go away when you close the terminal session.

An alternative way to define an environment variable is to set it in the same line where the target application is executed:

This second form has the benefit that the variable is only set in the environment space of the intended application.

If you are using Windows you have a few options. If you are interested in setting environment variables via the control panel, see the article linked above.

If you are in a command prompt window, you can set an environment variable using the set command:

Like in the Unix case, the variable is not stored or remembered beyond the current session.

If you are using the newer PowerShell console, the syntax for setting environment variables is completely different:

Finally, if you are using a Unix compatibility layer such as WSL or Cygwin, then you must go to the Unix section above and use any of the methods listed there for bash or zsh.

Are you confused by all the different ways to set environment variables? I personally find it inconvenient that each platform or shell requires a different procedure.

Here is a short .env file example with two variables:

You can create a .env file in the root directory of each of your projects, and that way you can keep all the variables that are needed by each project neatly organized!

Below you can see how to import a .env file into a Python application:

If you want to prevent python-dotenv from searching for a .env file through your directories, you can pass an explicit path to your file as an argument to load_dotenv():

There are some additional arguments that you can use when you call the load_dotenv() function. If you want to learn about them consult the documentation.

Once the .env file is imported, you can access environment variables using any of the methods shown above.

In many cases you will be adding environment variables that contain sensitive information to your .env files, like passwords or API keys. For that reason, in general you do not want to add these files to your project’s source control repository.

The standard practice is to add an exception for files with this name, so that they are not committed to source control by mistake. For git, you can add a line with the name of the file to the .gitignore file in the root of your repository.

But if you cannot commit the .env file, how do you tell users of the project which variables need to be set? For this you can add an example .env file to your repository with a name such as .env.example, that contains the list of variables that the project requires, but without including their values. This serves as guidance for users of your project, without giving away sensitive information.

I hope this article was useful to help you understand how to use environment variables to configure your Python projects.

Do you have any other ways to work with environment variables? I’d love to know!

Miguel Grinberg is a Python Developer for Technical Content at Twilio. Reach out to him at mgrinberg [at] twilio [dot] com if you have a cool Python project you’d like to share on this blog!