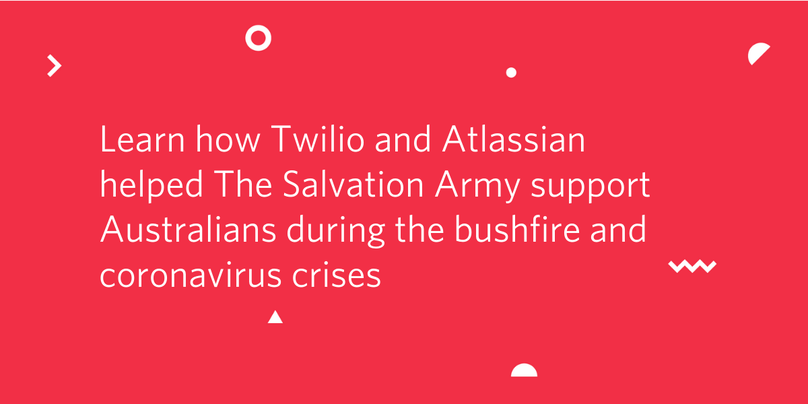 The past few months have been a wild ride in Australia. The summer brought extreme bushfires up and down the country and the autumn followed that with a global pandemic. Suffice to say that charitable organisations in Australia have been busy.

Late in 2019 The Salvation Army reached out to us asking for some help dealing with their increased contact centre volumes. The Twilio team sprung into action, trying to design a complete solution for them.

"Can we have something now?"

With the pressure piling on, we received another email from the head of operations at The Salvation Army. They needed something that could send and receive SMS messages now rather than provide a perfect solution weeks or months down the road.

They wanted to be able to send SMS messages from within Atlassian's Jira Service Desk and respond to incoming messages with an automated message.

Twilio's Rob Shaw rolled up his sleeves, dug into the Atlassian developer documentation and three hours later produced a simple Jira extension that enabled the Salvos staff to send SMS messages from within their Jira dashboard. 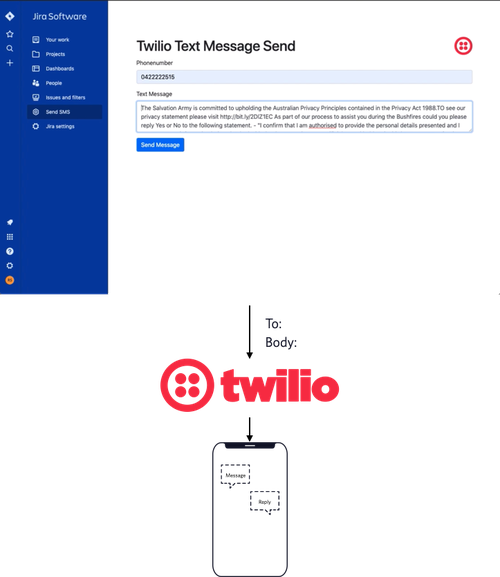 Automated responses to incoming messages were handled with Twilio Studio.

Thanks to the straightforward Jira plugin framework, Rob was able to build this simple integration to allow them to reach people in need via messaging. This was so important because it allowed back and forth conversations between the contact centre and people in the field. Many of these people didn’t have access to the internet due to the fires and remote locations so SMS messages were the most resilient way to communicate.

If you're interested in building Jira plugins like this, check out this post on how to build the simple plugin above that sends SMS messages from Jira.

This was a simple solution, but it gave the Salvos team a tool that they could use immediately and something we could revisit later to improve upon.

Requirements change, improvements must be made

A month after deploying the first version of the plugin, the Salvos team was back in touch with us. With a grant for bushfire relief allowing them to grow their team, the plugin wasn't scaling with them. Rob and I pledged to build a better second version.

We gathered requirements. The plugin would need to:

To expedite the development of the plugin, we got in touch with Oliver Wessels, team lead on the Jira Service Desk Ecosystem team. With Oliver on hand to direct us around the Jira plugin system we spent half a day building a new version of the plugin that could do all of the above, was secured with JWTs, and hosted on Twilio's Serverless platform.

The new version launched a week before the impact of COVID-19 in Australia started to ramp up, bringing a new set of problems with it.

Thankfully, the plugin wasn't built with a specific purpose in mind, so it was able to help out as The Salvation Army's requirements changed. We heard later that one way it had been used was to send messages to people in need before calling them. Warning or reminding someone of an incoming call, especially if they are vulnerable and it is coming from a withheld number, can lead to a better chance of them answering and receiving the help they need.

The power of code in the hands of people who help

Below you can see the messaging usage of The Salvation Army over the time of the bushfire crisis leading into the pandemic alongside when we deployed the second version of the plugin.

Each one of the messages represented in this graph was intended to help someone, from organising and communicating with people in the field during the bushfires to making it easier to connect with someone in need as effects of the pandemic grew. It was a privilege to work with Oliver from Atlassian and be able to support The Salvation Army in this small way.

If you're interested in how to build plugins like this, check out how to write a plugin to send SMS messages from Jira and you can find that example, as well as the more fully featured plugin, on GitHub.

Check out how Twilio.org is supporting crisis response efforts as this pandemic continues.