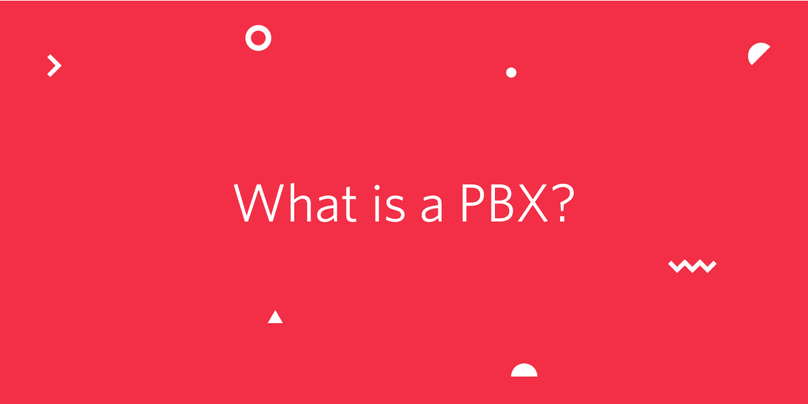 In a landscape inundated with business telephony system options, it can be hard to know which system works best for which business.

Before you dive into different providers and systems, let’s go over the basics and get some background information on the subject. There are two main types of telephone systems you’ll need to be aware of: a PBX and the PSTN.

Beyond that, there are a few types of PBX phone systems that can be personalized to suit the needs of a given organization. There is an abundance of information out there about each type of PBX, and while that may seem intimidating, it doesn’t have to be – we’ve got your back! We’ve outlined everything you need to know about PBX and included a crash course in each type of system.

What is a PBX and how does it compare to the PSTN?

A PBX, or Private Branch Exchange, refers to the enterprise phone system that handles inbound and outbound calls, both internally and externally for an organization. Traditionally, PBX systems function on copper phone lines.

The PSTN, or Public Switched Telephone Network, is the worldwide telephone line system accessed by the public. Unlike PSTN phone systems, PBX systems are private and primarily used as business phone systems.

How does a PBX work?

Traditional PBX telephone systems work by utilizing physical, on-premises copper landlines and a PBX box through which users share a given number of phone numbers and lines. There are several iterations of the PBX system now, from the original analog to the top-of-the-line hybrid and cloud-based systems that utilize VoIP.

Let’s talk about the differences between a few of the more popular kinds.

A PMBX, or Private Manual Branch Exchange, refers to a traditional switchboard system connecting phone calls with different landlines. This system requires a person (or several people) to manually connect and redirect every call coming in and out of an organization. This analog form of PBX is essentially outdated – most modern systems are now considered PABX, defined below.

The original PMBX systems and switchboards are no longer the default technology for most businesses – there are now more efficient ways to connect and route calls. Newer PABX systems utilize modern technology and embrace online calling, making it easier to reach people around the world.

Often thought of as the advanced version of PBX, PABX (or Private Automatic Branch Exchange) is an automated version of a traditional PBX system. Instead of utilizing humans to route or transfer calls between lines manually, PABX systems do this automatically. This cost-effective solution reduces the overhead of a traditional phone system, allowing organizations to reallocate funds towards more phone lines and more folks making calls.

Because manual switchboards are essentially defunct in a digital world, all PBX are now generally some version of PABX. Depending on the PABX, they may also fall under one of the following categories: IP PBX and hosted PBX. You’ll learn more about those below.

PABX is the bare minimum for a modern PBX solution. Unlike a traditional switchboard, automatic call connections allow businesses the freedom and flexibility needed to route and place several calls at once. However, unless the PABX also falls under the category of IP PBX or hosted PBX, it is fairly limited in its capacity outside of directing, receiving, and placing calls.

If you’re looking to collect analytics and data or move your system to the cloud, you will need to look at one of the next generation PBX options.

An IP PBX (or Internet Protocol Private Branch Exchange) is the next generation of PBX phone system. Incorporating VoIP, cloud connectivity, and traditional phone lines provides organizations with the best of both digital and analog technologies.

Also known as VoIP PBX, IP PBX systems provide users with all of the functionality of a PABX system (including call routing, voicemail, and call forwarding) while adding the benefits that only VoIP systems can provide. This includes less reliance on traditional telephone lines, meaning incoming calls are more reliable and more straightforward to manage via an internet connection.

IP PBX options also offer the opportunity to dig into analytics and data, allowing organizations to find efficiencies and debug as they grow. IP PBX systems can also provide easier scalability than traditional telephone systems, as they are not tethered to the same on-premise setup required by copper landlines.

SIP (Session Initiation Protocol) trunking is a layer on top of an IP PBX that uses an existing PBX to route calls around the world via an internet connection. Because these calls take place on internet infrastructure rather than old school copper phone lines, organizations have access to any customer around the world – so long as they have a phone number.

SIP systems enable existing phone systems to function in the cloud, providing businesses the flexibility to meet customers on reliable phone lines no matter where they are located. SIP phone calls are routed through a business’s existing phone system and on-premise PBX, through a SIP trunk, and on to the outside world through network infrastructure.

Having a PBX system that functions in the cloud is crucial to building a scalable telephony solution. Because an IP PBX can function in the cloud while working well with traditional telephone systems, this setup is extremely popular among businesses – no matter the industry.

With access to PBX analytics, businesses can optimize their calling practices using concrete data. Of course, if an IP PBX is used in combination with traditional phone lines, the matter of maintenance and relying on physical setups can still be a concern.

For those ready to connect completely in the cloud, a hosted PBX is an option. A hosted PBX (or virtual PBX) allows your phone system to operate entirely in the cloud with little maintenance as you scale. Hosted PBX systems provide organizations with all of the benefits of VoIP telephony systems without the strings that come with traditional systems, such as complicated physical setups and costly phone lines.

Organizations can still access all of the functionality of traditional telephone systems including conferencing and voicemail, as well as allowing access to the data and analytics unique to voice over IP systems.

With a hosted PBX, the benefits are many. A hosted PBX offers the most flexibility for businesses by removing the need for the maintenance and startup costs that come with a physical setup. In embracing the cloud as the base for your PBX system, you gain the ability to scale and adapt as your business and needs change.

Using Twilio to set up your PBX

No matter your PBX setup, when you’re ready we’re here to help optimize your current system and set you up with our Programmable Voice API. Though your PBX system options are numerous, you don’t need to fret over which service provider to choose. Twilio’s Programmable Voice, Elastic SIP Trunking, and Twilio Flex are here to meet all of your telephony needs.

And when you’re ready to build, we’ll help get you started.