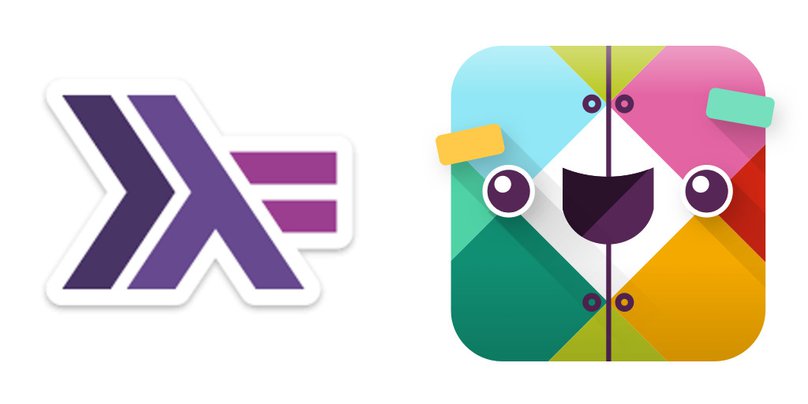 This is the second Haskell post here on the Twilio blog. So if you haven’t read the first one on setting up your Haskell developer environment, check that out here.

What are Slash Commands?

According to the Slack API site, messages beginning with “/” are treated differently from other messages: they “enable Slack users to interact with your app directly from Slack” and all send their messages “...to the configured external URL via HTTP POST.”

In this post, we’ll build a custom slash command that shares a trending programming post from Reddit about whatever you pass it as a command. For example, if you typed /redditbot python, it would return an article about Python.

What We’ll be Using

Get started by cloning the repo here by entering the following in your terminal:

This keeps things simple because otherwise, so many package dependencies would clash and turn into cabal hell.

Next, fire up another terminal, cd into the directory you cloned the repo into, and let’s open up a Ngrok tunnel.

The core of stack.yaml, our auto-generated stack file, should look like this: 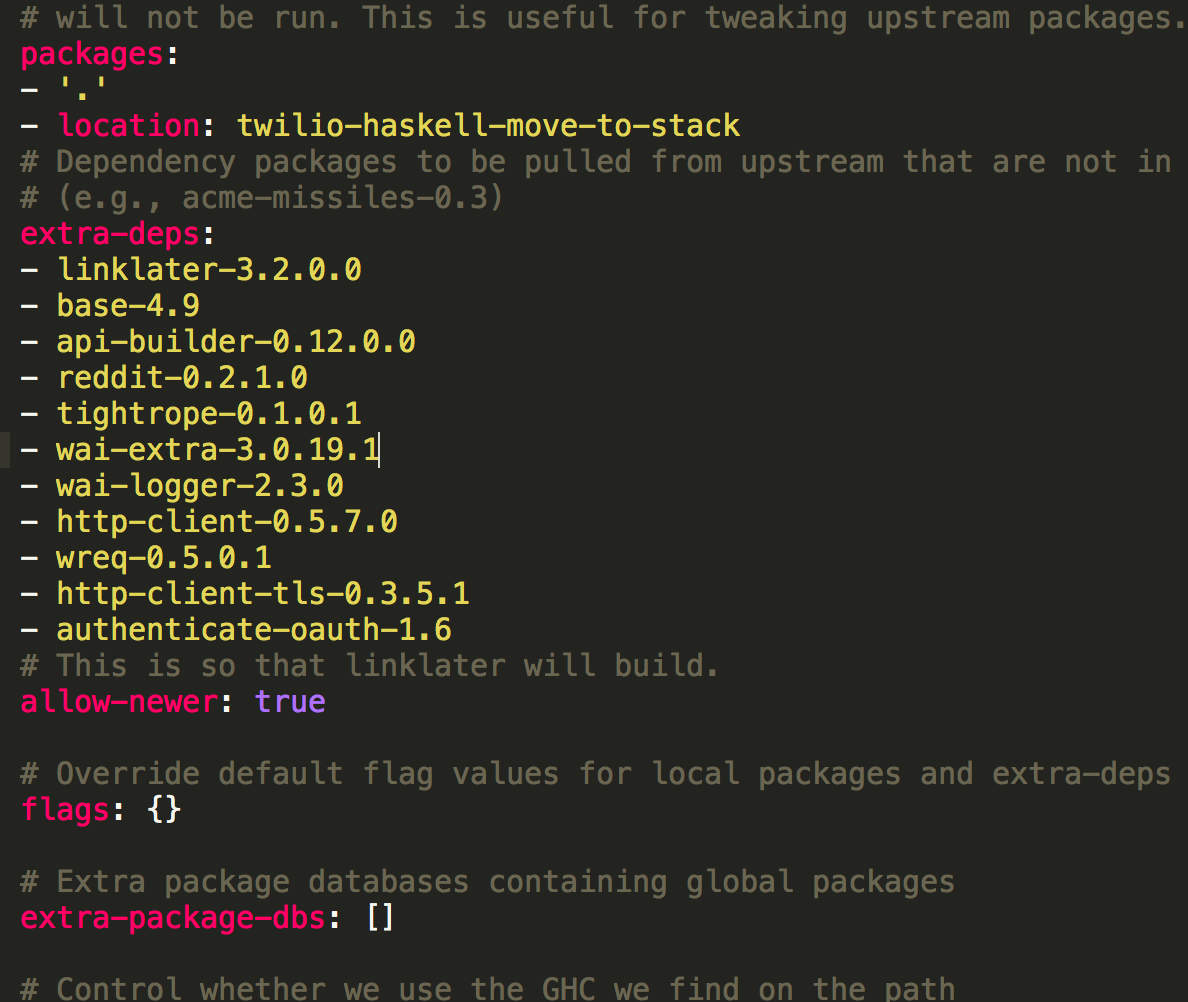 We need that location part to pull from the move-to-stack fork of Twilio-Haskell which works with the dependencies of all the other packages.

Get Started with Slack Apps

First, let’s go to https://api.slack.com. Then, click Your Apps in the top right-hand corner. You should see a page like the one below, and then click Create New App. 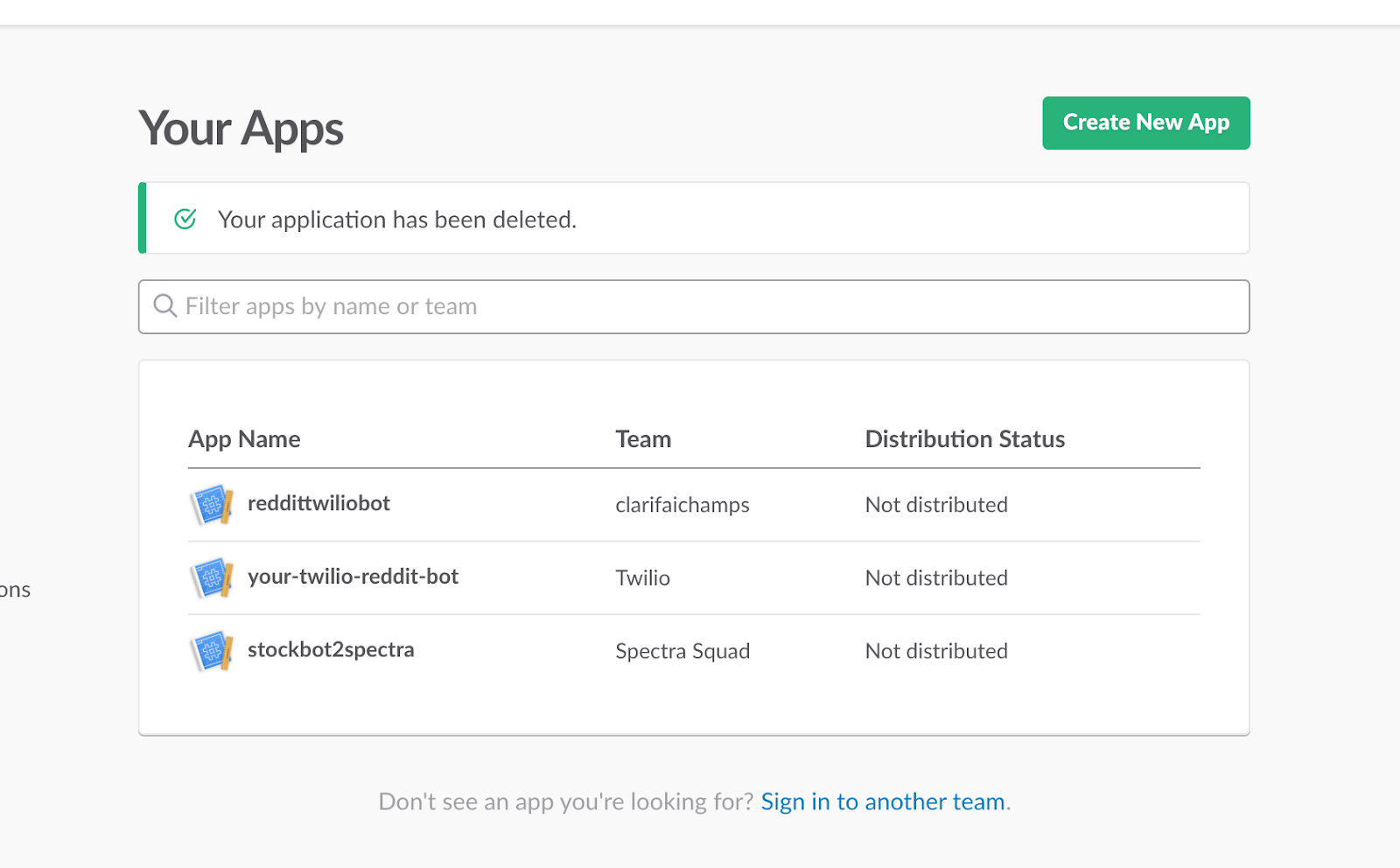 Pick a name for your bot and pick one of your Slack channels to deploy the bot to. Many groups now have a channel dedicated to testing bots. That’s one channel you could use. You should see something like this image below, which asks for your app name and a team you’re in (like a hackathon you were in, a class you took, a team you were on, or your company): 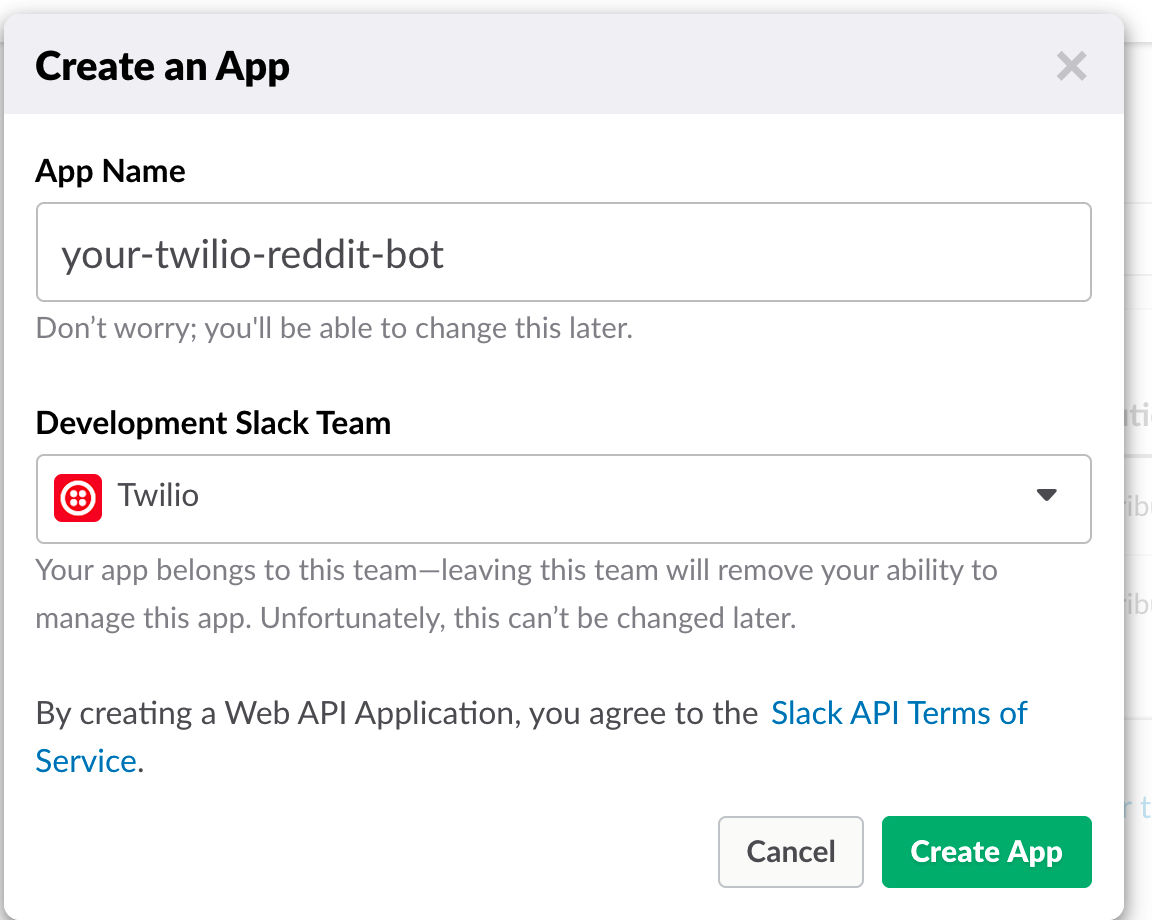 Click Create App, and then under features on the left-hand side, click on Webhooks. Make sure Activate Incoming Webhooks is on, and then scroll down and click Add New Webhook to Team. That page should look something like this: 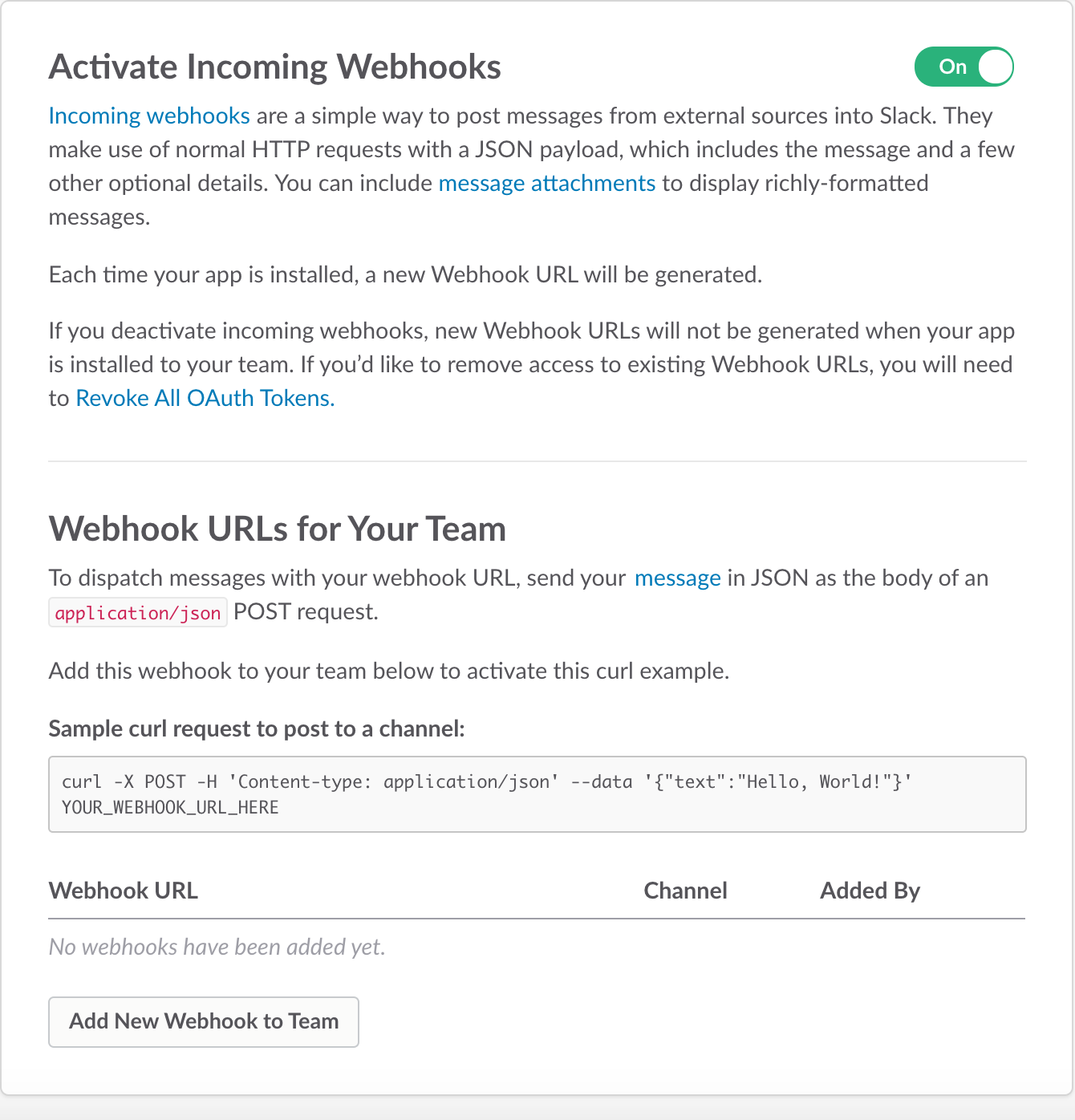 Copy this webhook URL and paste it into a new file in our project called hook.

Sweet! Now, again on the left column of your app’s page, under Features go to Slash Commands. Click Create New Command, and you should see this following page: 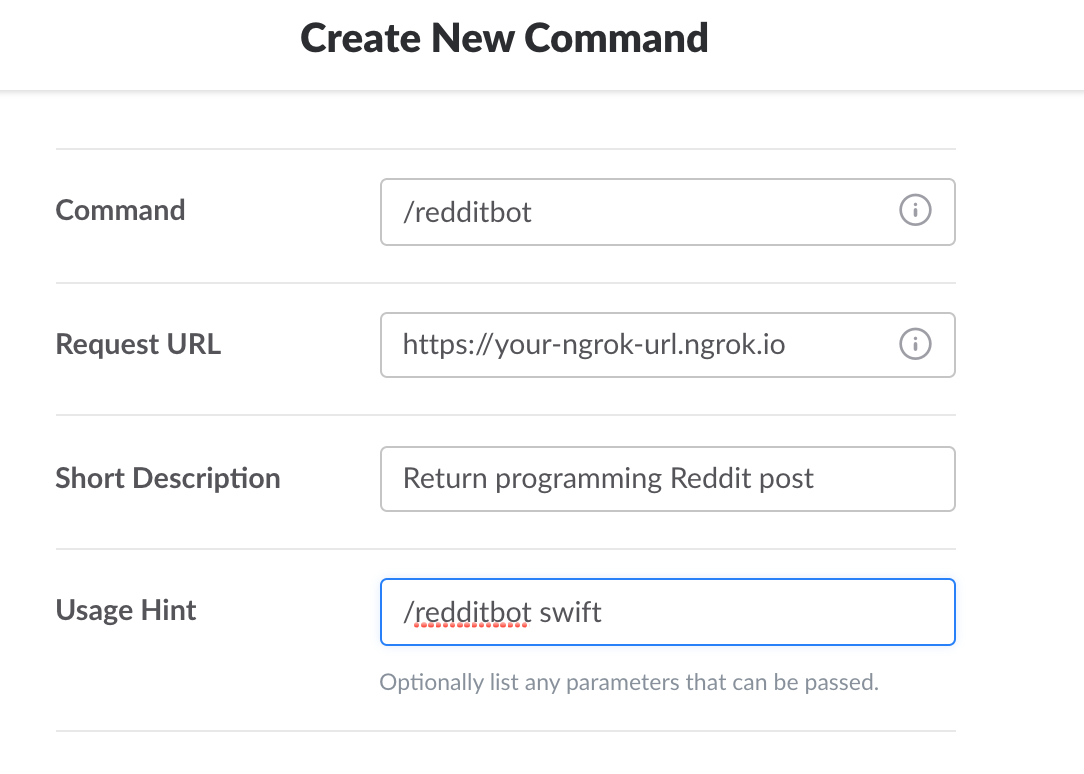 Fill in the text boxes above however you wish. The slash command /redditbot will be followed by a word that is searched for on Reddit. The bot will search Reddit and return a trending post about the word you searched for. Let’s check if the slash command registered. Save your project, open Slack, go to the team and channel you used above, and try your slash command:

If you don’t see the command auto-complete, then go back to Create New Command, check each step, and try again.

Now it’s time to examine some code. You will see a lot of packages and libraries imported into our project at the top of Main.hs. Let’s go over the functions our project already has.

First, we have readSlackFile which takes in our hook file and formats it into a type we want–in this case, one of IO Text. We need to read this file to send our message on Slack. Then configIO actually calls the function.

Then we have parseText and liftMaybe check that there is a word to search following the slash command. Whatever parseText returns is passed to liftMaybe to return the topic we want to search Reddit for. Our printPost function formats the link to display in the message.

Next, we have findQPosts which takes in the query we return from liftMaybe and passes that to runRedditAnon from the Reddit API, which gets all the posts from the front page of Reddit. FindQPosts searches those for trending posts on a certain topic (in this case, programming).

Now we need to get Reddit posts and create the message that will be posted to Slack. We do this by calling all the functions we just made above. We also use some of Linklater’s functions to check the command and its passed text, search Reddit for the passed text, and format the information as a message for the Slack channel you configured. The returned Slack message @’s your Slack username in the beginning, too.

This is actually called in messageOfCommandReddit which checks if there’s no parameter passed. In that case, we post “Unrecognized Slack request!”

Lastly, our main function uses Linklater’s slashSimple method to run on that same port you also call with ngrok. It prints a message out upon successfully running.

To run, go back to your current directory in the terminal, type stack build. This could take some time. So let’s check out Reddit in the meantime.

Once that’s complete, type stack exec redditbot. In the Slack channel that you configured to handle apps, type in /redditbot ____ where you fill in the underscore with a programming-related topic, like Python, Swift, or Haskell.

If you see a pop-up asking if you want your application to accept incoming network connections, click “allow”.

If your app is successful, you should see something like this: 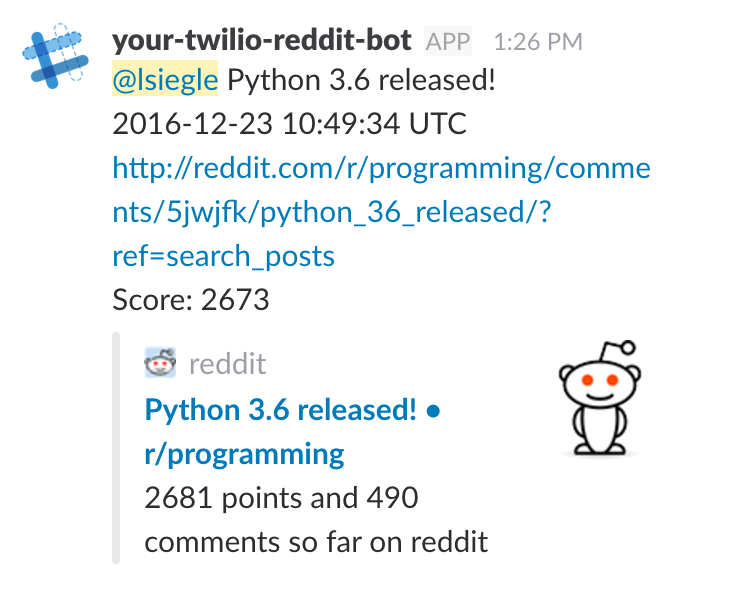 Yes, building Slack bots in Haskell is really that easy! Some Haskell APIs that you could use for another bot (or just in general) include: