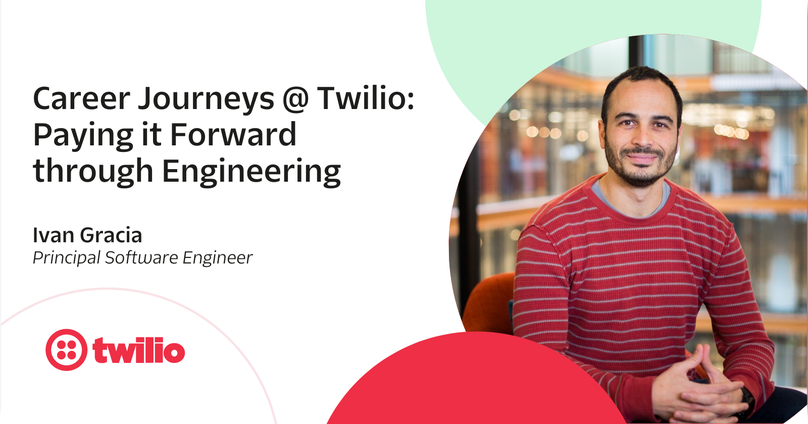 FunFact: Ivan regularly volunteers with the Red Cross to give back after witnessing a helicopter rescue in 2002. 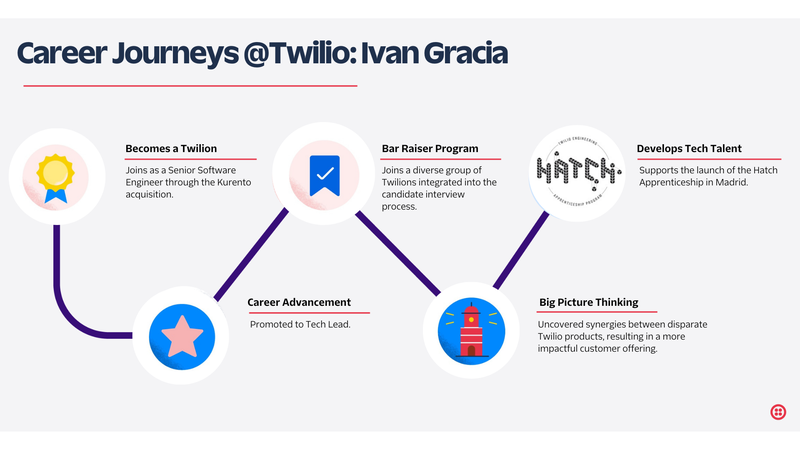 Ivan Gracia isn’t afraid of uncertainty – he thrives on it.

Before Ivan officially joined Twilio, he was a part of Kurento, the team behind the open-source project that became a wildly popular WebRTC media server on the Internet. When Twilio acquired the group in 2016, Ivan found himself at a crossroads: Continue that work as part of Twilio — or switch gears entirely and forge a new career in disaster relief.

He ultimately chose to stay at Twilio, where he is now a Principal Software Engineer, a role that gives him plenty of time and space to explore big questions and the innovations such brainstorming can yield. "The people I met and had conversations with at Twilio were incredible. Twilio was completely the opposite of other companies," he remembers. "They told me, "We want you to create. We're going to give you the freedom to do things."

An Acquisition - and a ‘Conundrum’

Ivan is passionate about two things: advancing technology and disaster relief. And, not long ago, he faced a major decision about which to devote his attention to.

In addition to being an accomplished software engineer, Ivan is also an experienced Red Cross volunteer, a commitment he embraced after he and a friend had a mountain-climbing accident – and his friend had to be evacuated by helicopter by the Guardia Civil de Montaña — basically the equivalent of the National Guard. From that day, Ivan vowed to pay forward that act of goodwill by volunteering with the Red Cross.

One of those volunteer opportunities – to support refugee relief in Greece – emerged at the same time as the Twilio acquisition.

Two options that could use his skills. Two chances to do what he loved. But he couldn’t do both.

It took Ivan weeks of weighing the decision, but the scales eventually tipped in favor of Twilio. While the work in Greece was critical, other people were available who could provide relief there. That was less true for his team at Twilio. He chose to stay in Madrid. “For me, joining Twilio was like the major leagues. The scale, reach, and the impact we could have were immense,” he says.

And he wasn’t alone: Out of the 12 engineers on the original Kurento team, nine decided to stay on with Twilio, and all are still with the company today! But they’re hardly a small team anymore.

“There were just nine of us for a long time, almost three years. Then, along with the rest of Twilio, the Madrid office started growing a lot,” Ivan recalls, pointing out that by establishing strong engineering practices and a local presence, the Madrid hub has expanded to over 200 people. 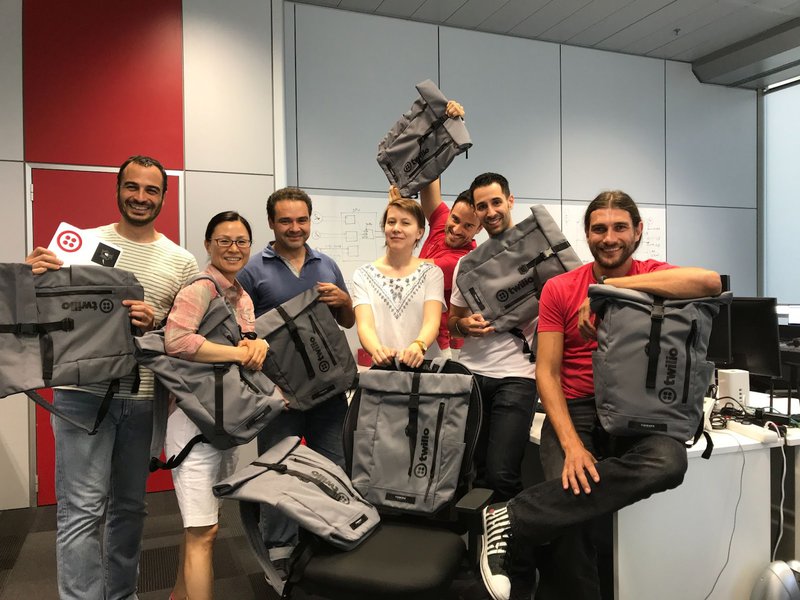 Ivan's approach to performance and innovation epitomizes a key Twilio Magic value: Curiosity. Rather than focusing only on large and ambitious projects, he takes great delight in working on "micro-goals," which he likens to "picking up gems on the side of the road."

"Gems," he says, "can lead you to a different opportunity than what you initially set out to find. You'll find things that you didn't know were there, which I enjoy. And at Twilio, I have the freedom and time to pursue that kind of innovation."

In one of Ivan’s recent projects, picking up a “little gem” led directly to a big breakthrough.

Twilio had just acquired Segment, a customer data platform. Ivan was intrigued by "an awesome piece of software" the Segment team had developed called Centrifuge, which runs a system for reliably sending billions of messages per day to hundreds of public APIs, AWS Lambdas, and data lakes.

"So I sent a message to one of the engineers on the Segment team," he recalls. "I wrote, 'Hey, I'm curious. What would happen if we sent everything we have through you?'"

The outcome of that conversation turned out to be a giant leap forward in merging the user experience between Segment and Twilio, uniting the platforms seamlessly for customers.

A Commitment to Serve and Empower Others

Ivan is a true Positron — one of the four central Twilio Magic values — and his commitment to serve and help others has had a positive impact on more than just his own career.

In 2019, Ivan joined the Bar Raiser program, a Twilio initiative that asks a diverse group of Twilions to be part of the interview process with potential employees. Once he started participating, Ivan realized that there was a lack of diversity in tech in Madrid — right in his own backyard. “It’s not a sprint we can fix,” he says. “It’s a marathon.”

So Ivan reached out to local boot camps and tech organizations to address diversity in the tech pipeline in Spain. With the help of colleagues from other Twilio locations, he started the process of introducing Madrid to Twilio’s renowned Hatch Apprenticeship — a software engineering apprenticeship program designed to identify and grow exceptional talent from sources that technology companies have not typically considered.

Creating and finding opportunities to support young professionals in his community is important to Ivan. He is passionate about uplifting underrepresented groups in the tech world and giving them a chance they might not otherwise receive. “If we are all the same, we won’t make a significant impact,” Ivan says.

The tech landscape of each country is different, so, Ivan notes, each Hatch program must align to a specific country’s needs and identify unrecognized groups unique to that region. Otherwise, he says, “it’s like going on a holiday in the Sahara desert with a wetsuit.”

Through his work with the Hatch program, Ivan has made significant strides in expanding the diversity of his team and the tech industry in Madrid as a whole. “I believe in hiring for talent and training for skills, and talent is talent, no matter where it comes from.” 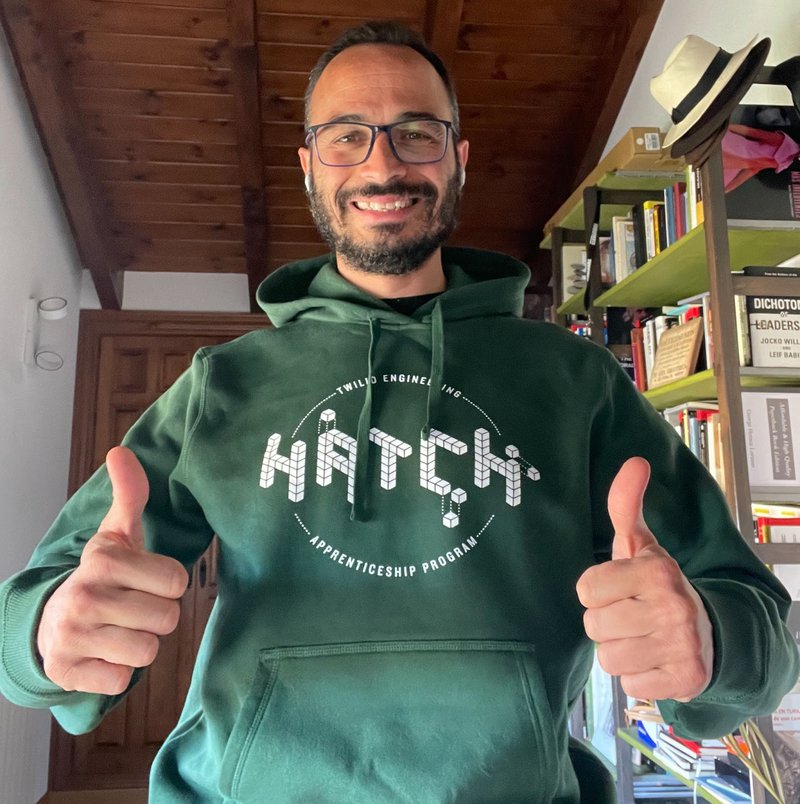 With every project that he works on, Ivan says, he sees and experiences Twilio's fundamental integrity – from empowering and building a new generation of leaders through the Hatch program to giving him space to allow his curiosity to flourish.

He especially appreciates how much emphasis Twilio's leaders place on the human side of the business. "It's never just about technology. It's about the people," he says.

"You saw that with all the care our leadership put into their response to the pandemic," he says, recalling how diligent and focused Twilio was as the world was engulfed in daily uncertainty. "It's something that permeates the culture. The values are more than something on a webpage."

And Ivan continues to be committed to carrying out those values, making an extraordinary difference at Twilio and within his community.