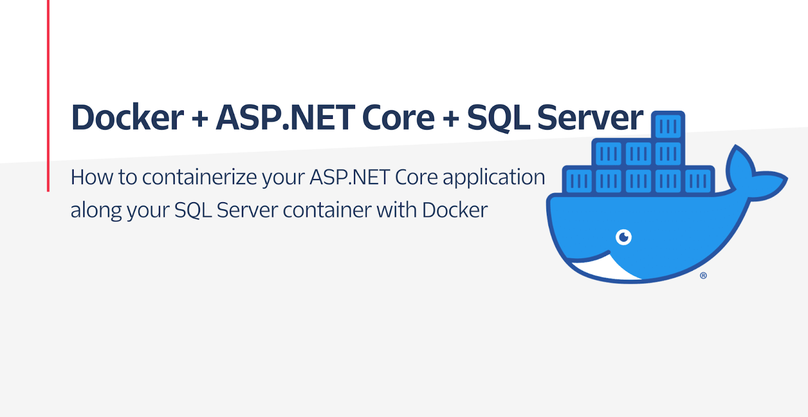 In my previous blog post, I showed how to deploy SQL Server in a Docker container, then connect to it from a .NET Web API application using Entity Framework Core.

In this post, you're going to build on the previous post and learn how to deploy a .NET Web API application in a Docker container and connect it to SQL Server running in a container also.

You will need the following things in this tutorial:

To get started, clone the repository from the previous post, and open the project in your favorite IDE.

It has a working .NET Web API application that connects to a SQL Server database, seeds, and queries the database for a list of products.

To deploy the Web API application in a Docker container and connect it to the SQL Server container, you'll need to do a few things.

Step 1: Add a Dockerfile to the Web API project

In the WebApiEntityFrameworkDockerSqlServer directory, create a file named Dockerfile and add the following content to it:

This Dockerfile performs a multi-stage build. The content of the above file is what Visual Studio would give you if right-clicked on the project and selected *Add > Docker Support...*, and chose Target OS as Linux.

Briefly (and somewhat simplified), it pulls down two Docker images, one to build the .NET application (that image includes the .NET SDK), and one to run it (that image has .NET ASP.NET runtime only, not the SDK).

The application will run on port 80, this will be exposed to your computer via the docker-compose.yml file.

To learn more about .NET on Docker, I recommend the excellent series by Steve Gordon.

Step 2: Change the connection string to the database

Open the appsettings.Development.json and cut the text from there, and paste it into appsettings.json. Within the connection string, change the server name from localhost to sql_server2022.

You should now have an appsettings.json file that looks like this:

Step 3: Build the Docker image for the Web API application

Open a terminal and navigate to the folder where the Dockerfile is located.

Run the following command to build the Docker image for the Web API application:

The -t flag tags the image with a name. In this case, the name is web_api. You will use this name in the docker-compose.yml file to reference the image.

This will take a little while to build. Once complete, you can run the following command to see the image:

Create a file named docker-compose.yml (it doesn’t matter where the file is located, but I suggest placing it in the same directory as your Dockerfile) and add the following content to it:

The first service web_api, uses the image named web_api to create a container named web_api_application. It maps port 80 inside the container to port 5000 on your computer.

The second service sql, uses the image mcr.microsoft.com/mssql/server:2022-latest to create a container named sql_server2022. It maps port 1433 inside the container to port 1433 on your computer. As mentioned above, this is not needed, but it is useful if you want to connect to the database from your computer.

Remember, you changed the connection string to point to a server named sql_server2022, that is the name of the SQL Server container defined in this file.

You don’t need to define any network, docker-compose will do this for you and place both containers in the same network.

To start the two containers, run the following command:

It will take a moment for them to start, especially if you need to pull the referenced images from Docker Hub.

In your terminal, you will see output from both containers as they start up. Watch for any errors or exceptions, but if all goes well, you can open http://localhost:5000/products in your browser, and you should see the same output as in the previous post.

To stop the containers, press Ctrl+C in the terminal.

In this post, you learned how to run a .NET Web API application and your SQL Server in Docker containers using the docker-compose tool.

You could upload the image of your Web API application to Docker Hub, or another image repository to share with your peers.

Bryan Hogan is a blogger, podcaster, Microsoft MVP, and Pluralsight author. He has been working on .NET for almost 20 years. You can reach him on Twitter @bryanjhogan.

How to get secrets from HashiCorp Vault into .NET configuration with C#

Learn how to read secrets and sensitive information from HashiCorp Vault and load it into .NET configuration with C#.

Learn about the new features, improvements, and breaking changes in the 7th release of the Twilio helper library for ASP.NET.

Learn how to retrieve the Visual Studio dev tunnel URL and use it to automatically update your Twilio Webhook URLs during startup of your ASP.NET Core application.

Develop a C# .NET application to generate spooky audio with Amazon Polly, upload the audio to Amazon S3, and then play your spooky audio as a phone call using Twilio Voice.

Learn how to scrape a magazine website on a periodic basis and send out SMS/MMS messages to notify subscribers of newly published issues.

How to build a URL Shortener with C# .NET and Redis

Learn how to build a link shortener using C#, .NET, and Redis. You'll be using ASP.NET Core to build the URL forwarder and the System.CommandLine libraries to manage the data.