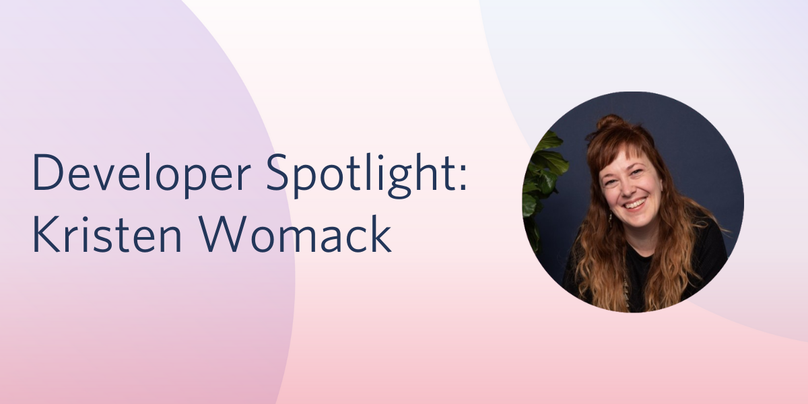 Kristen Womack may not be a traditional developer. She didn’t dream of building computers as a kid and she didn’t pursue a computer science degree. In fact, she studied sign language interpretation and linguistics in school. But, she is driven by something that fuels developers across the globe: “the hacky nature of wanting to make something work.” This nature has enabled her to use software and technology as the building blocks for her dreams.

Her career spans a number of roles in the tech stratosphere. As a Technical Product Manager at Best Buy, she first learned about Twilio. She found her “curiosity about API strategy wouldn’t end” and Twilio stood out to her as one of the companies with the best API documentation.

Her tech career grew as she co-created a Minneapolis chapter of the Geekettes and then co-founded the company, Hack the Gap, a hackathon designed for technical women and other under-served groups to come together and build without barriers.

But this is just a glimpse at what Womack has (and will) accomplish. Using tech as a “vehicle to make her vision come to life,” Womack is working to solve major gaps in the U.S. birth system.

The problem: parents need support too

From her own experience as a mom of two, Womack found the U.S. birth system and society’s perspective on birth to be medicalized, pockmarked by capitalism, and fiercely lacking when it came to supporting parents’ health and mental wellbeing. She asked us to think about the last time someone posted on Instagram or Facebook about the birth of their child.

“There will be dozens of comments on the baby, saying congratulations or how beautiful the baby is, but there will be maybe 1 comment referring to the wellbeing of the parent,” Womack explained.

In addition to not commenting or asking about the parent’s wellbeing, many parents are shamed for going off-path. Womack plucked a post-it note off of her computer and read, “Planning my birth at a birth center felt like a political act.” Parents stop sharing their birth plans for fear of being judged for doing something different.

And then, once the baby is born, parents are unlikely to share if postpartum isn’t going well.

But she had an idea. Could we change the way we talk to parents, about birth, their choices, and postpartum? Can we normalize the situation through language and support parents?

Womack decided to test her theory. If she set up a program to send positive, supportive text messages to parents, would 100 people sign up?

She placed “Hello Mom” cards in coffee shops in the Minneapolis area for moms to text “Hello” to a number to receive affirmational text messages. In her “hacky” way, she and a friend used Google script code in Google sheets as the data store. One tab was for incoming texts, one tab was outgoing texts, and one tab had the programs in it—strung together with Twilio SMS, Typeform, and Zapier.

She wrote messages that recognize how challenging it is to raise a child while also providing moral support;

The cards were shared via word of mouth, Facebook, and Instagram, and it wasn’t long before 2,300 people signed up. Hello Mom sent 90k text messages over 7 months, blowing the experiment out of the water.

Many moms told Womack that the text was sent at exactly the right moment, but the messages were programmed to send at a randomly selected time. It was only after Hello Mom had been running for a while that Womack was struck with a realization:

“It’s never not the right time to tell a mom (in the U.S., especially) that they are doing a great job.”

Womack could only recall two people, besides her doulas, that recognized how difficult it is to raise a child and specifically told her, "this is hard, but you can do it" completely believing in her.

She wanted to share that sentiment with moms. Telling them, “Whatever you’re doing, we’re here for you.”

Womack was funding these text messages on her own but without a business model, it wasn’t financially sustainable. Not to mention, she was worried her hacky setup would break as more people signed up. She decided to shut down Hello Mom, but this wasn’t the end of her mission to support parents.

Round 2: bigger and better with Mina Families

Instead, Womack expanded upon her initial idea and created the platform, Mina Families. This platform connects parents with doulas, lactation consultants, birthing centers, and resources to guide parents through the birth and care of their babies.

“We have this mission to change the world by giving people more agency over their own health, birth plan, and having education upfront,” Womack said.

A component of the platform is the ability to text into Hello, 💛 Mina to receive similar positive messages of affirmation. But, unlike Hello Mom, Hello, 💛 Mina is for all parents inclusive of all genders. 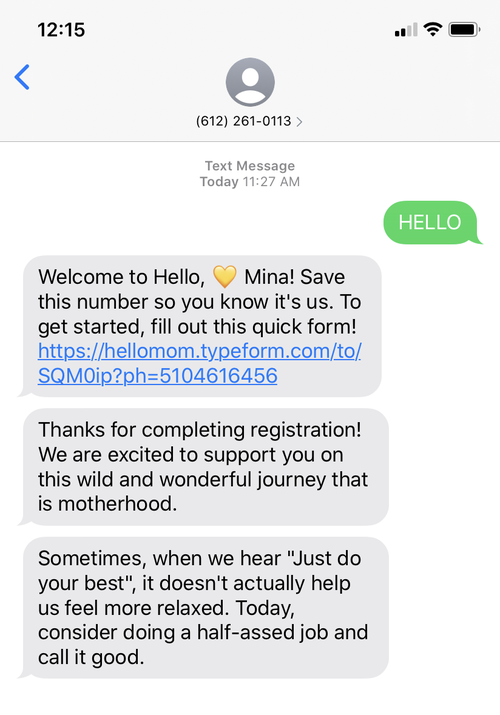 This time the messaging platform is built with their own proprietary APIs. “Our current one is much more grown-up,” Womack grinned.

Her goal is to expand the Mina Families to allow for parents to have a conversation via SMS with natural language processing. A parent, for example, could ask a question about lactation and a chatbot could respond with a few resources regarding their question.

And eventually, Womack would like to build out the platform even further to accommodate conversations between caregivers and parents.

“My dream would be for people who are caring for pregnant and birthing people to also sign up. Our text messages could evolve to be back and forth SMS communications with the birthing person and their partner or support person.”

The caregivers could serve as a lifeline to parents who have questions, concerns, or just need a little encouragement.

As Womack expands upon her vision to support parents, improve our birth system, and change the way we think about birth, we’re thrilled she’s using Twilio to build it.

Are you a parent who could use a little TLC and encouragement? Check out Hello, 💛 Mina texts for yourself.