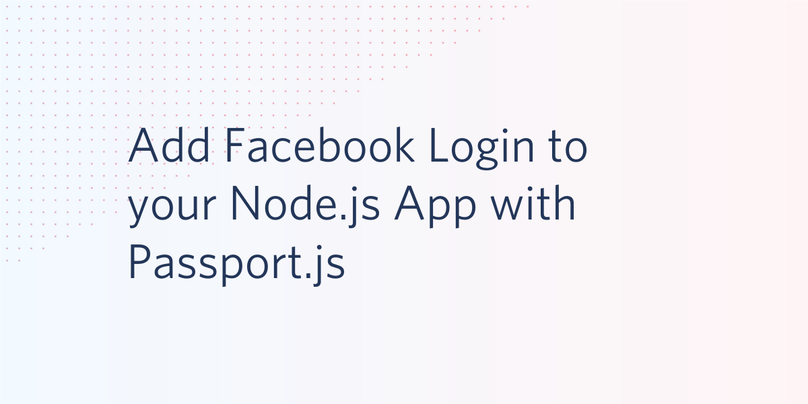 Almost all applications require users to create accounts on their websites in order to use certain services. This repetitive process of setting up new profiles and creating new passwords for every application is not only time consuming, but frustrating, and over time, account management becomes hard remembering credentials for every application.

Thanks to OAuth, we can use popular social media applications such as Google, Facebook and Twitter to authenticate users. This process makes implementing authentication easier and increases adoption due to existing trust built with the social network. So why not integrate it into your application?

In this tutorial, I will take you through how to integrate Facebook into your Node.js application.

You will need the following dependencies to complete this tutorial:

Follow the instructions below in your preferred terminal in order to set up your development environment:

To confirm everything is working as expected, open your preferred REST Client (Insomnia is my preference) and make a GET request to the following endpoint http://localhost:3000/users. Confirm the response is as below: 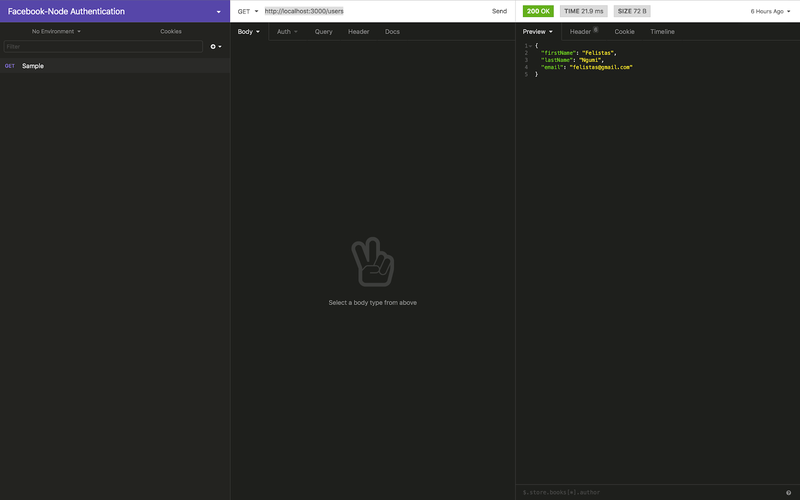 In order to understand how our project is set up, we will go through the individual folder structures which follow the MVC (Model View Controller) pattern. As a recap of the MVC pattern, the model defines the schema of the data in the database and how it will be stored. Controllers hold the business logic of the application while the view holds all our routes.

Inside the app folder, we have user and utils folders which are responsible for the user resource and database configuration respectively. The index.js file, which is the entry point of our app, is responsible for express setup. In this project, we will use ES6 and Babel to compile the code. I have also configured nodemon to listen to any changes made to the app then reload the server.

In our case, the application we are building would be the third party application. Facebook would be our HTTP service and the end-user the resource owner. These three fall under the following OAuth roles:

In order for successful user authentication to happen, a series of steps need to be followed:

Note: Auth2 has different types of grant types. For this tutorial, we will use the Authorization code grant type. To learn more about OAuth2, you can have a look here

According to the official documentation, Passport an authentication middleware for Node.js supports a number of strategies including Facebook, Google, Twitter, etc. Now, lets get our hands dirty and get the FaceBook authentication up and running. To start off, run the following commands to install the various dependencies needed:

The passport-facebook package enables us to authenticate users using Facebook. In app/user/user.controller.js replace the existing code with the following lines of code:

Next, in app/user/user.router.js replace the existing code with:

Here, we have defined our callback URLs and specified successful and failure routes in case authentication fails i.e the / and /fail routes for success and failure respectively.

For successful authentication, we need to register our application callback URL and obtain the client secret and client id from the Facebook app developer console. Navigate to https://developers.facebook.com/ and create an app. 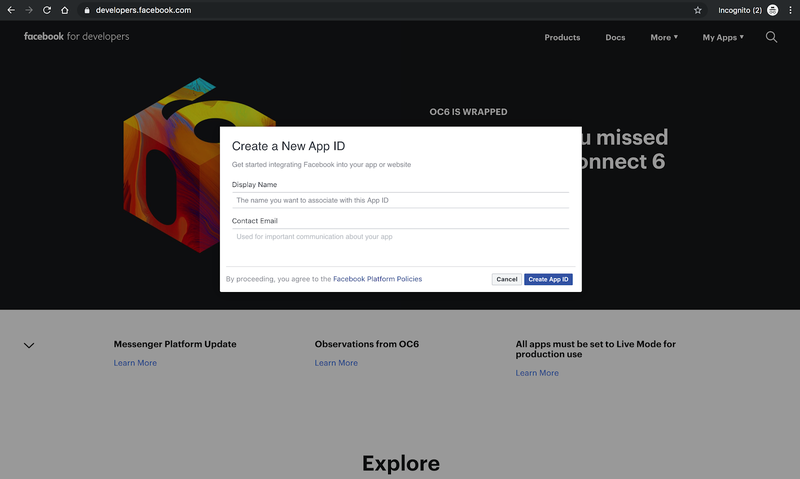 You will then be redirected to the app's dashboard which should be as shown below: 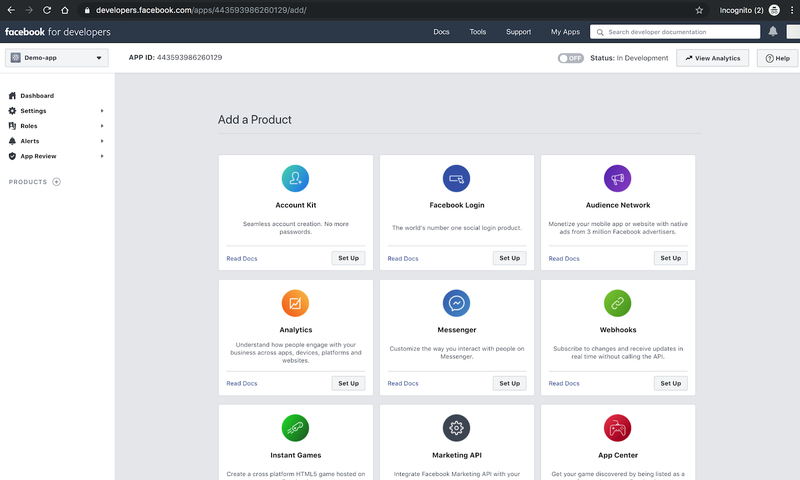 Next, let's configure our callback URL by adding a platform under the basic tab in settings:

Note: Be sure to select a website as your platform type. 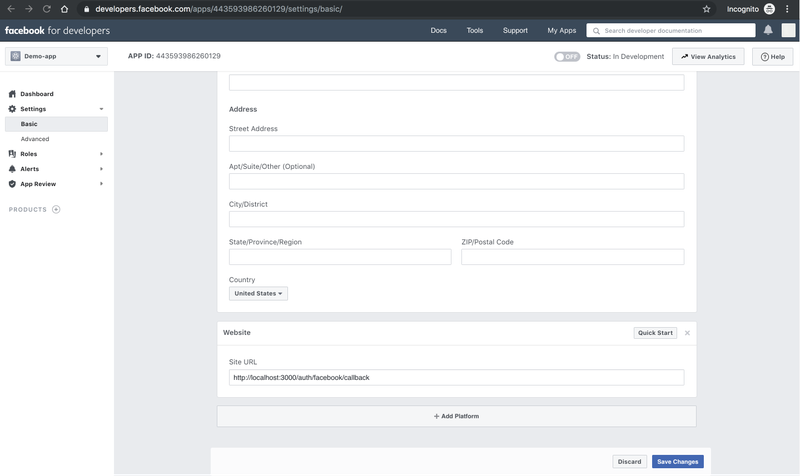 Next, create a .env file in our project directory and add the following:

Be sure to obtain the keys from the app console.

In your browser, paste the following URL http://localhost:3000/auth/facebook and you should see the resulting screen below prompting you to enter your Facebook credential details. 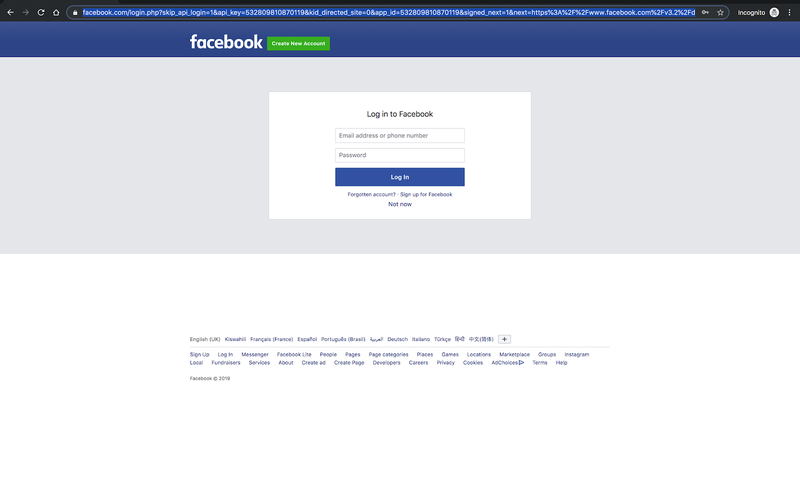 Upon successful validation of your credentials, you will be redirected to a success screen as shown below: 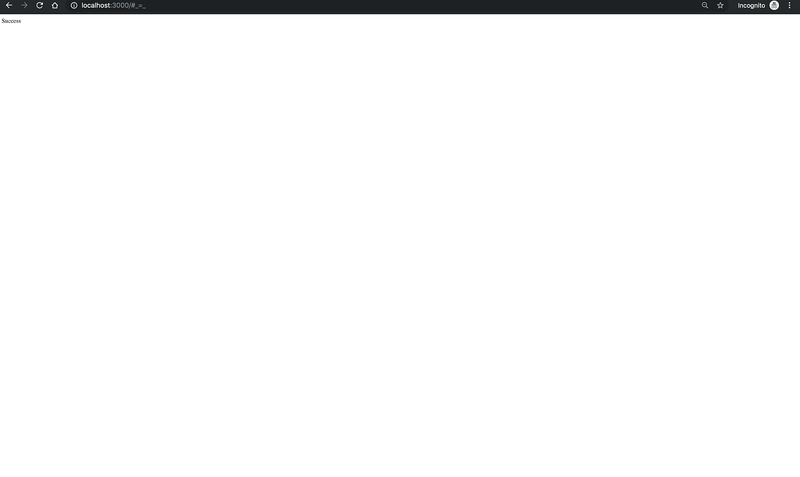 To understand the process flow, a number of steps need to be followed:

Once we obtain this, we can now use our user model to save data in the database configured as shown above.

In this tutorial, we learned how to authenticate users using Facebook in a Node.js application. For the full working project, you can have a look at it here. The process should also be similar and straight forward for other platforms like Google, Github and Twitter. I would love to hear from you! You can reach me on Twitter, LinkedIn or drop me an email. Happy hacking!