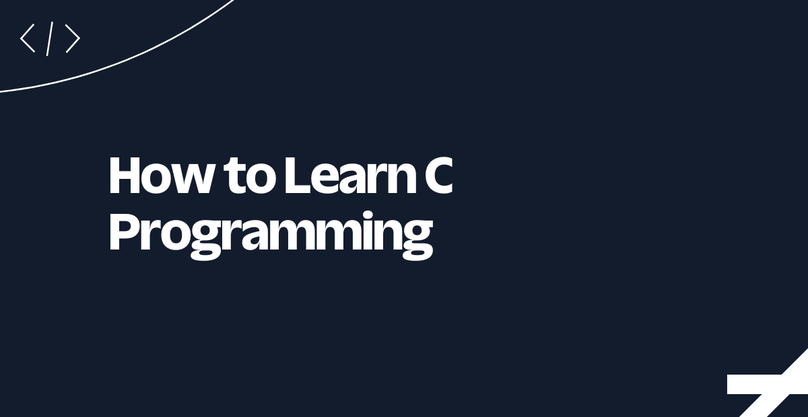 That’s too bad, as the job market for C programmers continues to be strong, and the resources available to learn C programming for beginners are abundant and easy to find.

In this post, we’ll provide you with a starting point to begin learning C. We’ll discuss the C language and its benefits and then point you in the direction of resources and tutorials to help you learn and begin programming with C.

Let’s start with the fundamental question: what is C?

C is a procedural programming language, meaning the code appears in functions or procedures separate from the data structures.

Additionally, C is very portable. This means that you can recompile most programs written in C with many types of processors or microcontrollers in other computers, and virtually any modern computer in use today has a compatible C compiler. Because of its portability, C is useful in a wide variety of applications, including:

C is also the basis for other languages. So you’ll find many modern languages written in either C or its relative, C++. Additionally, you can use C to extend most languages—e.g., Java and Python.

The benefits of learning C

Here are some of the top benefits of learning C.

Compared to other languages—like Java, PHP, or C#—C is a relatively simple language to learn for anyone just starting to learn computer programming because of its limited number of keywords.

Because C is a lower-level programming language, this makes it an excellent language for learning the fundamentals of how operating systems and hardware work. For example, when programming with C, you manage the program's memory compared to many other programming languages that automatically handle memory allocation and garbage collection. This characteristic is partly what makes C a great learning language for new programmers and budding computer scientists—even if it doesn’t require you to have a great deal of knowledge of the inner workings of your computer before getting started. In addition, this can be of great benefit where high performance and efficiency are needed.

Ease of transition to other languages

C syntax is the basis for other popular languages like Java and C#. This means that a C programmer can transition to other languages quite easily.

Learning C can also be very useful for programmers experienced with other languages, especially if there’s a need to build cross-platform applications to communicate with specific hardware on each device. C is often the best tool for this, as it can link between hardware devices and the business logic written in another language. For example, if you don’t have a library in your favorite language to talk to a new sensor, C would be the perfect tool for that.

No cost to start

There are also many free and open-source tools for C software development available for all modern operating systems. So when you download a compiler and an editor, it’s very easy to start using C—and at no cost.

Finally, C programmers are still very much in demand, so the market isn’t shrinking.

Where can I learn more about C programming?

Among the countless online resources available to learn C programming, below is a list of the notable ones, including C programming tutorials:

The C Beginner’s Handbook tutorial can get you started with C programming training in no time. There’s also a PDF and an ebook version of the handbook.

This detailed video tutorial goes through all the basics of C for beginners, including what you need to get started on Windows and Mac computers.

In this excellent video, you get an introduction to computer science and the C programming language.

In addition to the above, there are many other courses available through online education platforms, such as Coursera.

How can I start using C?

Although there are C compilers and development tools for many platforms, here’s a few to get you started:

Write and Run C in Xcode 13

This video shows you how to use the Xcode IDE available on macOS to write and compile C programs.

Walkthrough: Compile a C Program on the Command Line

If you’re using a Windows operating system, this article walks you through how to compile a C program on a Windows computer.

How to Compile and Run a C Program in Linux

This article explains the steps to compile a C program on a Linux computer using the GCC compiler.

If you want to get started programming in C for a device other than your desktop or laptop computer, this might be the tutorial for you. It shows you how to start programming Arduino devices with C.

Keep the following list of useful references for C programming handy when getting started.

These FAQs are from the book “C Programming FAQs: Frequently Asked Questions” by Steve Summit and are available online for free by the publisher and the author.

This page provides a complete reference to the GNU C compiler/language.

Although not as trendy as languages like Python or Go, the applications for C programming—especially at the device level—are ubiquitous and diverse. And it’s because C has been around for several decades, that a wealth of resources to learn C programming are available and easy to find. The above resources will help you get started.

Learn how to send messages in C with Twilio

Ready to send messages in C? Sign up for a free Twilio account to get started today.