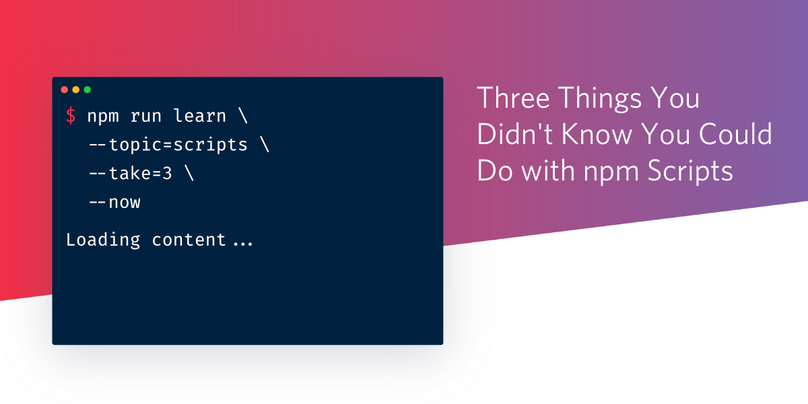 The Node.js ecosystem is full with useful CLI tools and most of them offer configurations that let you tune them to do exactly what you want. However, sometimes you still have the need for very custom configurations and scripts. This is where "npm scripts" come into place. While you might have used this to set up your "build", "dev" or "start" script, there's a lot of things you can do with them. In this blog post we'll talk about the most useful and some hidden features.

Before we get started, make sure you have the latest version of npm installed. While a lot of these things should work in yarn, berry and pnpm as well, we'll focus on npm in this article. Everything in this post has been tested with npm version 6.10.

What are npm scripts?

When we talk about "npm scripts" we are talking about entries in the scripts field of the package.json. The scripts field holds an object where you can specify various commands and scripts you want to expose. These can then be executed using npm run <script-name>.

You'll be able to run:

This is especially handy if you want to pass a variety of arguments to a CLI command and don't want to re-type them every time. Additionally you'll be able to access any scripts that were exposed by your dependencies, which means you no longer need global dependencies.

After that, anyone who wants to use your project, doesn't have to install TypeScript globally but instead can run npm run build after they've run npm install. It also means that people can have multiple projects with different versions of the same command installed.

Command aliasing like this might be the thing that npm scripts are most known for. But there is a variety of things you can do to uplevel your npm scripts!

From the tips and tricks we'll cover in this blog post, this might be the best known, but I think it's a very powerful one that should be covered.

Let's say you have the following scripts section:

If you now run npm run build the following things will automatically be triggered:

This works because npm will automatically detect if a script has other scripts named the same way but prefixed with pre or post and will execute those in the respective order. It's a great way to chain commands without convoluting your scripts. Good use cases for this would be:

The next thing was a pleasant surprise for me the first time I discovered it. When you run a command or script through npm run..., your environment variables will automatically be augmented with a set of variables from npm.

All environment variables are prefixed with npm_ and can be grouped into two types:

If you are curious of all the values that are passed to scripts in your project, add the following entry to your scripts:

Then run npm run check-env in your command-line and you should see a list of all the environment variables that npm has set for you. Some that stood out for me:

There's a variety of different useful variables in here and I encourage you to check it out, especially if you are working on creating automation scripts.

Check out my blog post If you want to learn more about environment variables in Node.js in generalt.

So far we covered how to create scripts, which environment variables are set and how to call the scripts. However, sometimes you want to be able to pass arguments to your scripts so that they can be more dynamic. There are two different ways you can pass arguments to npm scripts.

The first one way just passes the arguments directly to your actual command. For example:

Will be executed as:

The important part here is the -- followed by a space. Anything after that will be passed one to one into the actual command for the script. This is useful for examples like the one shown above where you expose a base command like tsc and just want to occasionally pass additional arguments to the command.

The second option is to use npm's built-in argument parser. This is probably one of the lesser known features of npm scripts and I was super excited when I learned about it. Essentially, npm will parse any argument you pass to the script unless it's passed after -- followed by a space. After npm parses them, they'll be available under npm_config_ in the environment variables.

To test this, create a new scripts entry:

It should output Hello Dominik Kundel. It's important to note that since we are not configuring this arguments parser, it is not very flexible in terms of argument syntax. For example if we remove the = signs and run the same command again:

We'll get Hello true true Kundel Dominik instead because it will interpret --last and --first as boolean flags and set their value to true and will pass the rest of the arguments to the script as unparsed arguments resulting in echo "Hello $npm_config_first $npm_config_last" "Kundel" "Dominik" being called.

Now that we covered a few ways you can use npm scripts and unleash their power, I wanted to share a few of my favorite tools that might help you bring your npm scripts to the next level.

These are just a few tools and I'm certain there are a lot more. If you have some that you think should be listed here, feel free to send me an email to dkundel@twilio.com or send me a DM on Twitter and I'm happy to add them here.

npm scripts are a useful way to improve the development experience for you and everyone working on your project. They can enable you create quick commands to re-run common tasks, abstract away internal implementations by creating a clear interface and can act as a quick scripting interface.

I'd love to hear some of the scripts you built and other tricks you might have encountered while building your own npm scripts!